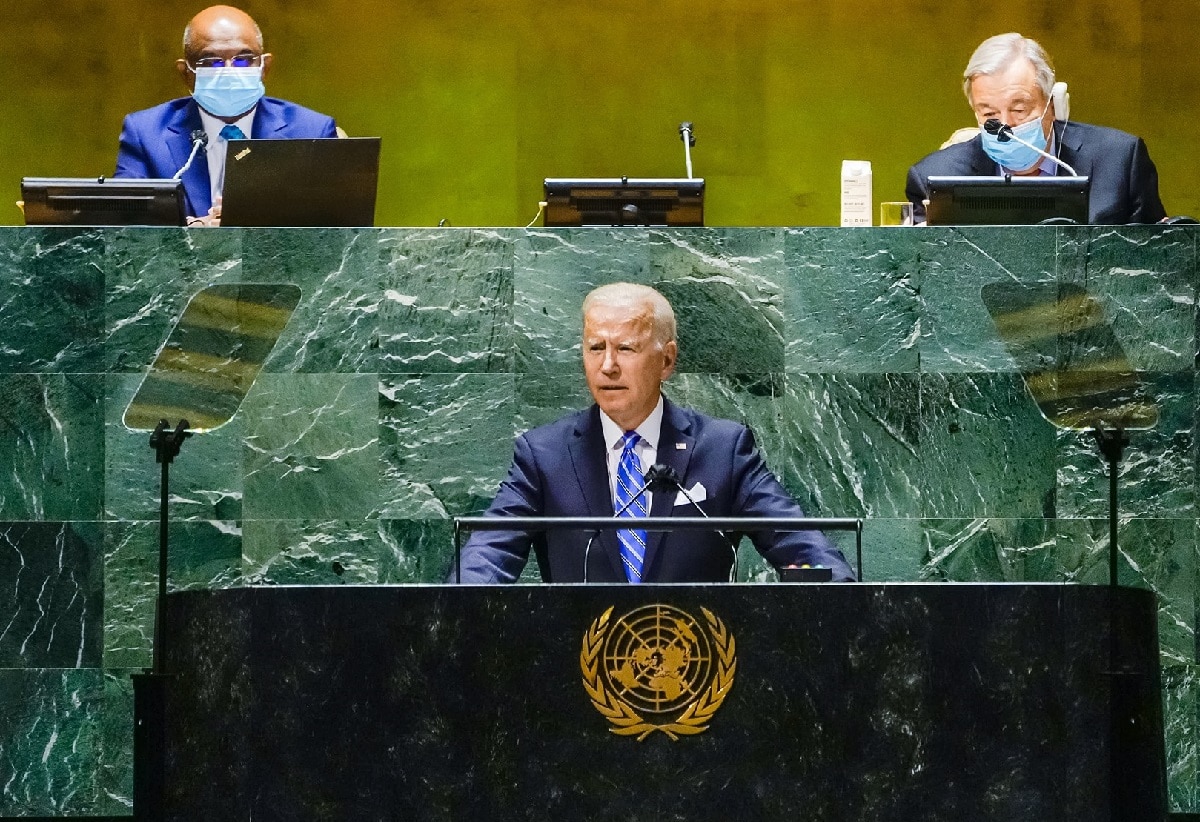 In his first outing at the United Nations, President Joe Biden was bent on a singular mission: to show the world that he was not Donald Trump.

Again and again, Biden emphasized his commitment to diplomacy, to international organizations, to women, to minorities, and most of all, against war. But the catchphrases failed to stir the audience. Unlike his former boss, Barack Obama, Biden was not once interrupted by applause.

The failure to resonate lies in the disconnect between Biden’s words and his actions.

Biden stressed his administration’s commitment to democracy and human rights, but the smoldering nightmare of Afghanistan is a human repudiation of Biden’s professed values.

His ignominious surrender to the Taliban inflicted strategic and reputational damage on the United States that will resonate for years to come. China, Pakistan, and Russia are seeping in as the U.S. floods out, just this week meeting with the Taliban to organize Afghanistan’s future. Will these governments call the Taliban to account for the terrorists in its government? The exclusion of women and girls from school? The targeting of LGBT Afghans? Its callous disregard of democratic norms? Hardly.

Biden proudly announced that “as we close this period of relentless war, we’re opening a new era of relentless diplomacy.” Yet “relentless diplomacy” was nowhere to be seen as U.S. forces scuttled from the Bagram base. Afghans, NATO allies and other partners on the ground were not consulted, their subsequent complaints dismissed.  What about the reassurances that the U.S. is resolute in its opposition to terrorism, with “over the horizon” capabilities to protect the homeland? Those words were belied by the recent drone strike that killed aid workers and children.

Nor did the disconnect between word and deed end at Afghanistan. Glaringly absent from Biden’s speech: China. Aside from an easily missed reference to Xinjiang as an example of human rights concerns, Biden studiously avoided the issue. Rather, the president spun the fairy tale that “as a global community… our own success is bound up in others succeeding as well. To deliver for our own people we must also engage deeply with the rest of the world.” Heart-warming, but the People’s Republic of China does not subscribe to this philosophy.

From Covid to Xinjiang, Taiwan to the South China Sea, Afghanistan to Africa, and notably, at the United Nations itself, China threatens those values. As the world continues to reel from COVID, it remains unclear whether a lab leak from Wuhan is at the heart of the pandemic. China has stymied all efforts to investigate, including those by the World Health Organization – a United Nations specialized agency. Instead, the WHO did Beijing’s bidding as COVID exploded, failing to declare it a pandemic and encouraging nations to continue taking flights from Beijing and beyond.

And then there’s Chinese stewardship of the International Civil Aviation Organization (ICAO) over the last six years, catastrophic on both the organizational and bureaucratic fronts. The Chinese ICAO director general engaged in cover-ups to conceal Chinese hacking, ignored the COVID challenge to aviation, and allowed sexual harassment and whistle-blower abuses to run rampant. The same is true in other Chinese-run U.N. agencies like the United Nations Industrial Development Organization (UNIDO) and the International Telecommunications Union (ITU).

In each instance, the same pattern has emerged: the exploitation of the position to advance Beijing’s agenda at the expense of the organization’s own mission; management crises, corruption, and fraud.

Should Biden have dedicated his speech to confronting China? Of course not, but ignoring China’s assaults on the U.N.’s mission in a speech dedicated to asserting U.S. fidelity to the U.N. and, more broadly, the rules-based international order gives the impression that the United States is irresolute, fearful to confront Beijing diplomatically, much less militarily.

The president’s partisans will insist that Biden was obliquely referring to threats from the PRC when he alluded to cyber-crime, human rights, minority rights, freedom of navigation, territorial expansion and more. The Chinese, they insist, will know what he means. Even if true, expecting our adversaries to parse the president’s speech and construe it as a warning is neither serious nor effective.

In sum, the speech did little to reassure allies, dissuade adversaries, or forthrightly articulate U.S. interests and make clear that the U.S. will act to defend them. It did, however, reveal the true passion of the Biden administration – words.