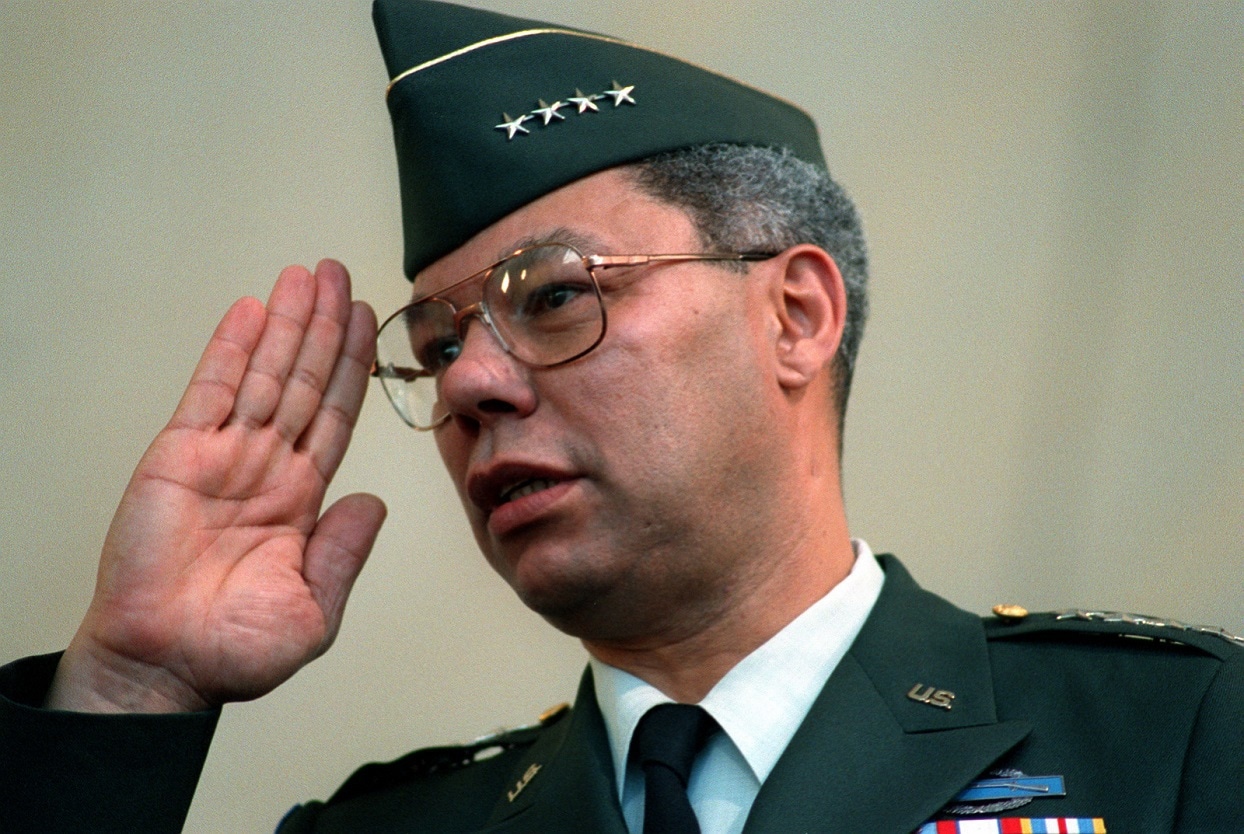 GEN Colin Powell, chairman of the Joint Chiefs of Staff, slautes during the Sunset Ceremony for Pearl Harbor survivors at t he Arizona Memorial Visitores Center. The ceremony is part of day-long observances commemorating the 50th anniversary of the Japanese attack on Pearl Harbor.

Colin Powell has passed away, and we have begun to engage with the enigma of his life and career.

To declare a public figure “complicated” in the post-mortem has become a way of avoiding the most dreadful aspects of that person’s career. When Henry Kissinger finally goes the way of all flesh, a wave of obituaries will undoubtedly try to wash away his legacy in Bengal, Chile, and Cambodia with the word “complicated,” an effort that will do a disservice to our understanding of the man’s impact on the world. But Colin Powell was genuinely complicated. Powell led a singular career in the United States national security bureaucracy, becoming well-regarded by almost the whole of government despite a series of dreadful mistakes that will forever characterize his reputation.

The early details of Powell’s career have been detailed elsewhere. Powell came to public attention as the first Black National Security Advisor in the final years of the Reagan administration, where he helped pick up the pieces in the wake of Iran-Contra and manage the declining years of the Soviet Union. In 1989 he became the first Black Chairman of the Joint Chiefs of Staff, and earned a prominent place in the national imagination during the 1990-1991 Gulf crisis. Along with CentCom commander General H. Norman Schwarzkopf, Powell became the face of a military that had finally thrown off the shadow of the Vietnam War. It is difficult to convey to a 2021 audience the change in esteem that the Gulf War wrought for the profession of arms in the United States, and Powell largely presided over that transformation.

Powell became associated with the “Powell Doctrine,” a way of thinking about war that sought to place clear limits on what are today called “Forever Wars.” The Powell Doctrine espoused several rules designed to limit the types of military interventions launched by the United States. Effectively, the US should only intervene in conflicts critical to the national interest, with objectives attainable by force, and in which there is a clear exit strategy. The Vietnam War was a catastrophic experience for the US Army in particular, and Powell internalized the need to avoid such disaster in the future as much as anyone in American life.

The legacy of the Powell Doctrine is itself complicated. In addition to being a grave violation of an appropriate civil-military relationship, the Powell Doctrine was part of a set of policies that inadvertently paved the way for the disaster in Iraq and Afghanistan. The Army concluded that counter-insurgency conflicts, even when waged with technical competence and precision, were not winners for the institution; even successful campaigns would be long and would generate popular hostility that would damage the health of the service in the long run. Part of the Army’s answer was to intentionally forget the expertise it had developed in counter-insurgency during the Vietnam period. A second element was an accumulation of doctrine and practice that emphasized rapid, decisive maneuvers in order to defeat an opponent. While this approach produced stunning operational successes in Iraq and Afghanistan, it could not stave off the political disasters that those wars would become.

Ironically, Powell helped lead the United States into precisely the kind of war that he had worked for much of his life to avoid. The Afghanistan war was launched with a clear national interest in mind and conducted with overwhelming force, but completely lacked any sense of an exit strategy. The national interest logic of the Iraq War was murky at the time and has become less clear in the intervening years.

Powell’s most infamous moment remains the UN speech in 2002, in which he wildly overstated evidence of Iraqi chemical weapons development. Powell was hardly unaware of the degree to which the evidence was overstated, and there is universal agreement that he was the most hesitant member of the Bush administration in the run-up to the Iraq War. The hesitancy is undoubtedly to his credit, but that he nevertheless acquiesced in the decision for war and the deception that accompanied it is a stain that cannot be washed from his reputation. 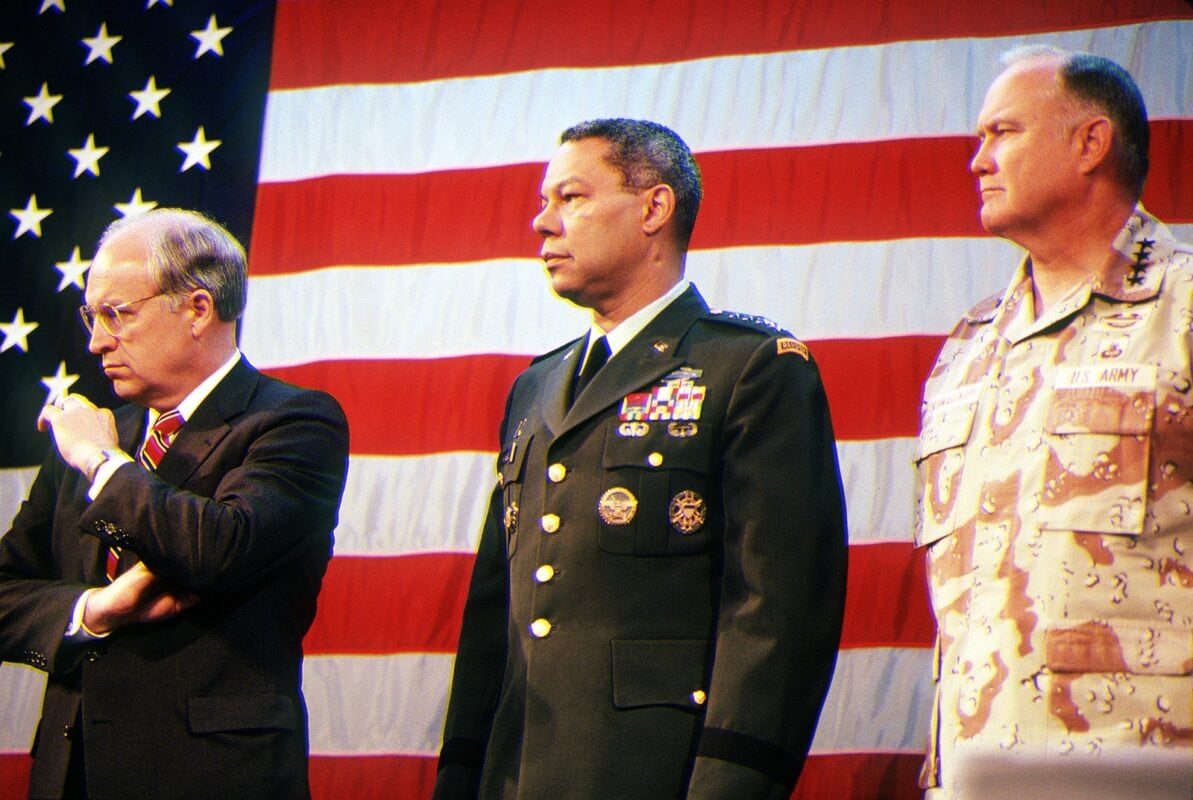 Powell’s later career also bears some attention. After he left the Bush administration, he began to shift away from the Republican Party that he had identified with, implicitly or explicitly for most of his life. Powell endorsed Barack Obama in 2008 and continued to endorse Democrats for the rest of his life. In the last year, he supported President Biden’s decision to leave Afghanistan and called for a policy of restraint towards Iran, North Korea, and China. In 2021 he called for President Trump to resign in the wake of the January 6 attack on the Capitol.

While Powell’s own political journey was obviously unique, his late-career changes of heart may have heralded a shift in the officer corps towards the Democrats and away from the Republicans. Like other college-educated professionals, military officers drifted towards the Democrats during the Trump era, a development that may or may not become a trend.

There is more to say about Powell than space allows. His connection with the cover-up of the My Lai Massacre was small but does him no credit.  Similarly, history will not treat kindly his resistance to the integration of LGBTQ personnel into the military in the 1990s. At the same time, the esteem that those who served with him in the military, and both with him and against him in government, is genuine and almost universal. A figure who can generate, at this late date in the history of American democracy, esteem from all corners cannot but be considered “complicated.”