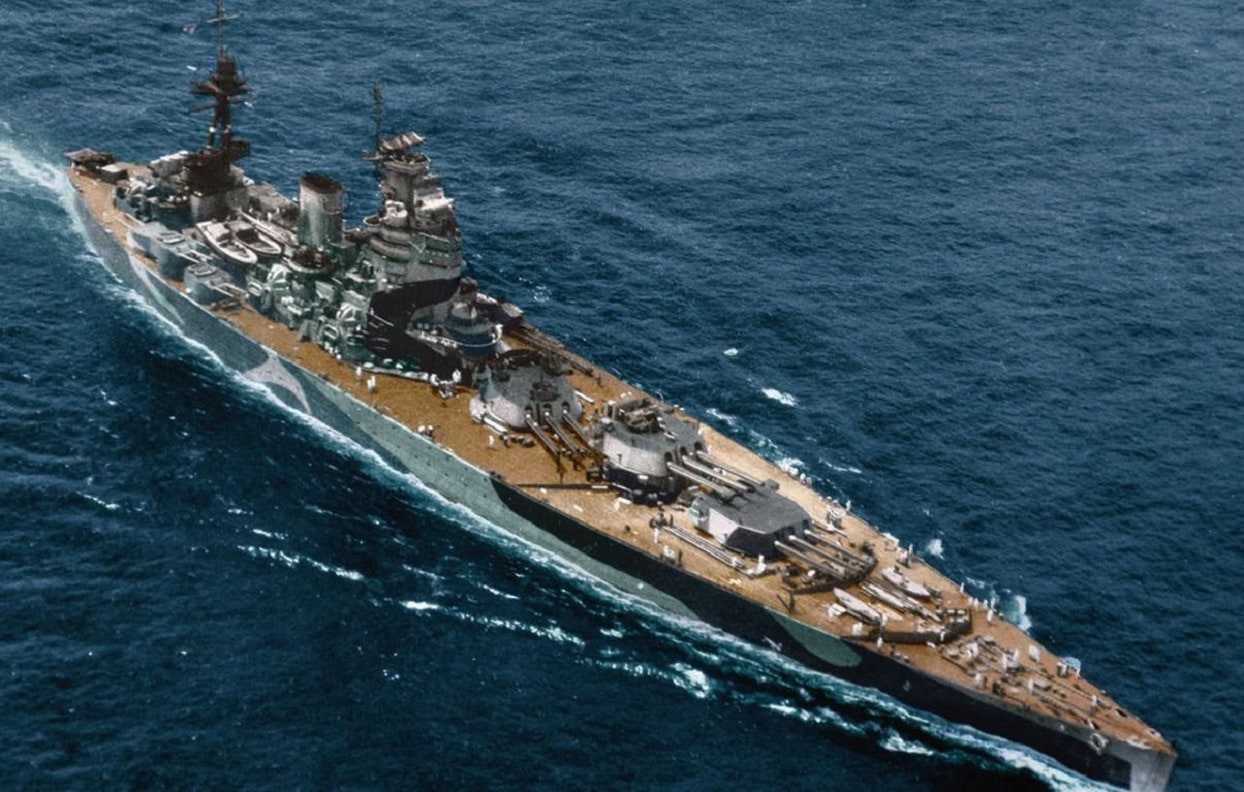 HMS R0dney, one of the Royal Navy’s Finest Battleships: When she was commissioned in August 1940, Germany’s battleship Bismarck was considered one of the most advanced and modern warships in the world.

She was Germany’s largest warship in Europe – and she was sunk by the combined efforts of an aging British battleship and antiquated Fairey Swordfish torpedo bomber aircraft.

While newer and more modern battleships including the HMS King George V and her sister ship HMS Prince of Wales also hunted Bismarck, HMS Rodney led the efforts to avenge the loss of HMS Hood.

On May 27, Rodney along with King George V took part in a naval duel against the German battleship, destroying Bismarck‘s guns. Rodney then closed to point-blank range and continued to engage. Eventually and in combination with torpedo attacks, Bismarck was crippled, which was soon after scuttled by her crew. HMS Hood was avenged and it was a gallant end to the German warship.

Pennant number 29, HMS Rodney was one of only two Nelson-class battleships built for the Royal Navy in the 1920s.

Named for Admiral Lord Rodney – a British naval officer who has been credited with the tactic of “Breaking the Line” – the warship was notable for her 16-inch guns.

As with her sister ship, she carried all her main armament forward of the superstructure.

Launched in 1922, she was commissioned in 1927. At the time it was believed the class was the perfect balance of size, armoring and armament. Nelson and Rodney were considered two of the most powerful battleships in the world throughout the 1920s and early 1930s. And yet, the two warships earned a series of dubious nicknames including “Queen Anne’s Mansions” in account of the bridge structure resemblance to a well-known London block of apartment buildings; as well as “Cherry Tree Class,” which mocked the fact that they had been designed as far larger warships but were “cut down” by the Washington Treaty of 1922.

Being limited to 35,000 tons required the unique placement of the three turrets forward of the superstructure, which gave the ships a unique profile, while armor was limited to vital areas.

By the outbreak of the Second World War, more modern and powerful vessels including the King George V-class had entered service, but HMS Rodney played a critical role.

In addition to hunting down Bismarck, she took part in Operation Torch, the Allied landings in North Africa, and during Operation Overlord she participated in the bombing along the Normandy coast. Rodney supported the British landings at Sword Beach and then bombarded German positions at Bénerville as well as several German positions in the region of Caen.

She also performed escort duties with the Murmansk convoys, and in total steamed more than 156,000 nautical miles with no engine overhaul after 1942.

After December 1944, she became the flagship of the Home Fleet in Scapa Flow and rarely left her mooring. She was finally sold for scrap in 1948. While outdated by the Second World War, she honored the name of Adm. Rodney and lived up to her motto: Non Generant Aquilae Columbas(“Eagles do not breed doves”).