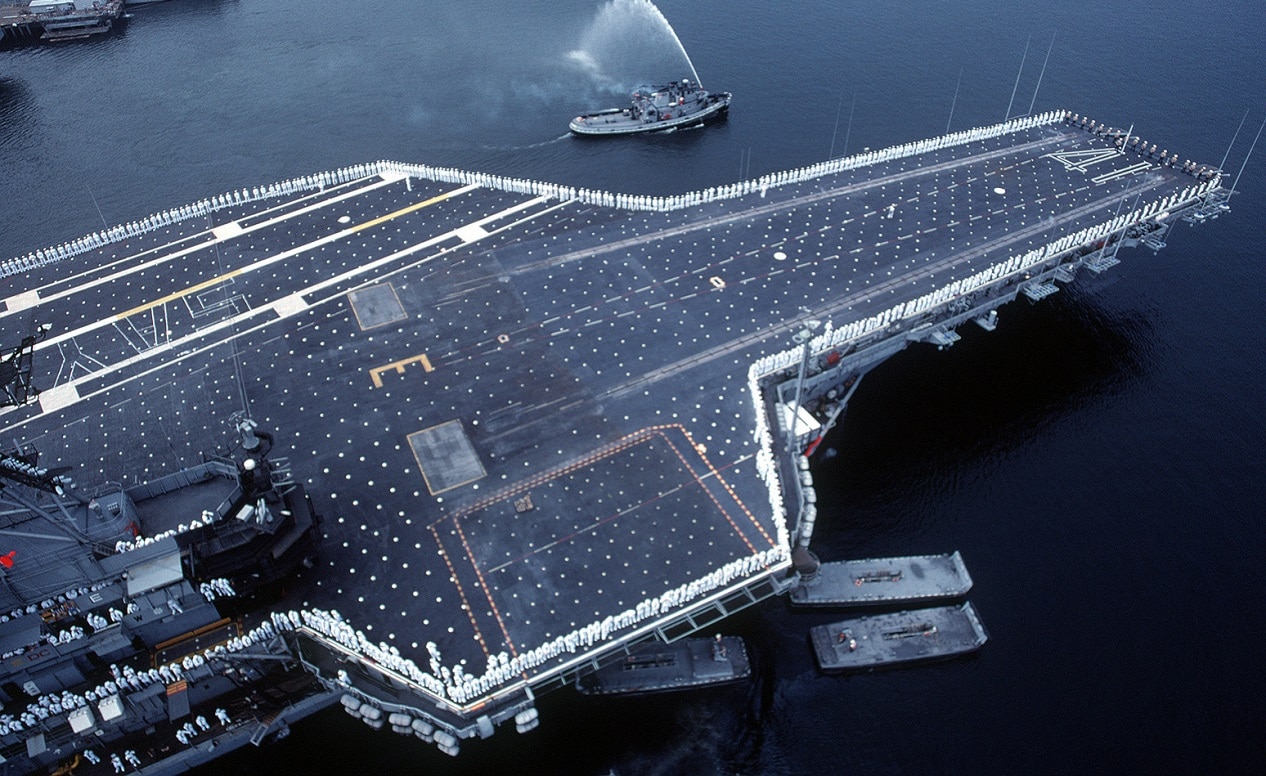 The 5 Best Aircraft Carriers Of All Time (As Told By A Professor from the US Naval War College) – Anyone who’s tried to compare one piece of kit—ships, aircraft, weaponry of various types—to another will testify to how hard this chore is.

Ranking aircraft carriers is no exception. Consulting the pages of Jane’s Fighting Ships or Combat Fleets of the World sheds some light on the problem. For instance, a flattop whose innards house a nuclear propulsion plant boasts virtually unlimited cruising range, whereas a carrier powered by fossil fuels is tethered to its fuel source. As Alfred Thayer Mahan puts it, a conventional warship bereft of bases or a coterie of logistics ships is a “land bird” unable to fly far from home.

Or, size matters. The air wing—the complement of interceptors, attack planes and support aircraft that populate a carrier’s decks—comprise its main battery or primary armament. The bigger the ship, the bigger the hangar and flight decks that accommodate the air wing.

Nor, as U.S. Navy carrier proponents like to point out, is the relationship between a carrier’s tonnage and number of aircraft it can carry strictly linear. Consider two carriers that dominate headlines in Asia. Liaoning, the Chinese navy’s refitted Soviet flattop, displaces about sixty-five thousand tons and sports twenty-six fixed-wing combat aircraft and twenty-four helicopters. Not bad. USS George Washington, however, tips the scales at around one hundred thousand tons but can operate some eighty-five to ninety aircraft.

And the disparity involves more than raw numbers of airframes. George Washington‘s warplanes are not just more numerous but generally more capable than their Chinese counterparts. U.S. flattops boast steam catapults to vault larger, heavier-laden aircraft into the wild blue. Less robust carriers use ski jumps to launch aircraft. That limits the size, fuel capacity, and weapons load—and thus the range, flight times and firepower—of their air wings. Larger, more capable carriers, then, can accommodate a larger, more capable, and changing mixes of aircraft with greater ease than their lesser brethren. Aircraft carriers’ main batteries were modular before modular was cool.

And yet straight-up comparisons can mislead. The real litmus test for any man-of-war is its capacity to fulfill the missions for which it was built. In that sense George Washington, a nuclear-powered aircraft carrier, may not be “superior” to USS America, the U.S. Navy’s latest amphibious helicopter carrier, or to Japan Maritime Self-Defense Force “helicopter destroyers”—a.k.a. light aircraft carriers—despite a far more lethal air wing and other material attributes. Nor do carriers meant to operate within range of shore-based fire support—tactical aircraft, anti-ship missiles—necessarily need to measure up to a Washington on a one-to-one basis. Land-based implements of sea power can be the great equalizer. Like any weapon system, then, a great carrier does the job for which it was designed superbly.

And lastly, there’s no separating the weapon from its user. A fighting ship isn’t just a hunk of steel but a symbiosis of crewmen and materiel. The finest aircraft carrier is one that’s both well-suited to its missions and handled with skill and derring-do when and where it matters most. Those three indices—brute material capability, fitness for assigned missions, a zealous crew—are the indices for this utterly objective, completely indisputable list of the Top Five Aircraft Carriers of All Time.

5. USS Midway (CV-41). Now a museum ship on the San Diego waterfront, Midway qualifies for this list less for great feats of arms than for longevity, and for being arguably history’s most versatile warship. In all likelihood she was the most modified. Laid down during World War II, the flattop entered service just after the war. During the Cold War, she received an angled flight deck, steam catapults, and other trappings befitting a supercarrier. Indeed, Midway‘s service spanned the entire Cold War, winding down after combat action against Saddam Hussein’s Iraq in 1991. Sheer endurance and flexibility entitles the old warhorse to a spot on this list.

4. USS Franklin (CV-13). If Midway deserves a place mainly for technical reasons, the Essex-class carrier Franklin earns laurels for the resiliency of her hull and fortitude of her crew in battle. She was damaged in heavy fighting at Leyte Gulf in 1944. After refitting at Puget Sound Navy Yard, the flattop returned to the Western Pacific combat theater. In March 1945, having ventured closer to the Japanese home islands than any carrier to date, she fell under surprise assault by a single enemy dive bomber. Two semi-armor-piercing bombs penetrated her decks. The ensuing conflagration killed 724 and wounded 265, detonated ammunition below decks, and left the ship listing 13 degrees to starboard. One hundred six officers and 604 enlisted men remained on board voluntarily, bringing Franklin safely back to Pearl Harbor and thence to Brooklyn Navy Yard. Her gallantry in surviving such a pounding and returning to harbor merits the fourth position on this list.

3. Akagi. Admiral Chūichi Nagumo’s flagship serves as proxy for the whole Pearl Harbor strike force, a body composed of all six Imperial Japanese Navy (IJN) frontline carriers and their escorts. Nagumo’s was the most formidable such force of its day. Commanders and crewmen, moreover, displayed the audacity to do what appeared unthinkable—strike at the U.S. Pacific Fleet at its moorings thousands of miles away. Extraordinary measures were necessary to pull off such a feat. For example, freshwater tanks were filled with fuel to extend the ships’ range and make a transpacific journey possible—barely.

The Pearl Harbor expedition exposed logistical problems that plagued the IJN throughout World War II. Indeed, Japan’s navy never fully mastered the art of underway replenishment or built enough logistics ships to sustain operations far from home. As a result, Nagumo’s force had too little time on station off Oahu to wreck the infrastructure the Pacific Fleet needed to wage war. And, admittedly, Akagi was lost at the Battle of Midway, not many months after it scaled the heights of operational excellence. Still, you have to give Akagi and the rest of the IJN task force their due. However deplorable Tokyo’s purposes in the Pacific, her aircraft-carrier force ranks among the greatest of all time for sheer boldness and vision.

2. HMS Hermes (now the Indian Navy’s Viraat). It’s hard to steam thousands of miles into an enemy’s environs, fight a war on his ground, and win. And yet the Centaur-class flattop Hermes, flagship of a hurriedly assembled Royal Navy task force, pulled it off during the Falklands War of 1982. Like Midway, the British carrier saw repeated modifications, most recently for service as an anti-submarine vessel in the North Atlantic. Slated for decommissioning, her air wing was reconfigured for strike and fleet-air-defense missions when war broke out in the South Atlantic. For flexibility, and for successfully defying the Argentine contested zone, Hermes rates second billing here.

1. USS Enterprise (CV-6). Having joined the Pacific Fleet in 1939, the Yorktown-class carrier was fortunate to be at sea on December 7, 1941, and thus to evade Nagumo’s bolt from the blue. Enterprise went on to become the most decorated U.S. Navy ship of World War II, taking part in eighteen of twenty major engagements of the Pacific War. She sank, or helped sink, three IJN carriers and a cruiser at the Battle of Midway in 1942; suffered grave damage in the Solomons campaign, yet managed to send her air wing to help win the climatic Naval Battle of Guadalcanal; and went on to fight in such engagements as the Philippine Sea, Leyte Gulf, and Okinawa. That’s the stuff of legend. For compiling such a combat record, Enterprise deserves to be known as history’s greatest aircraft carrier.