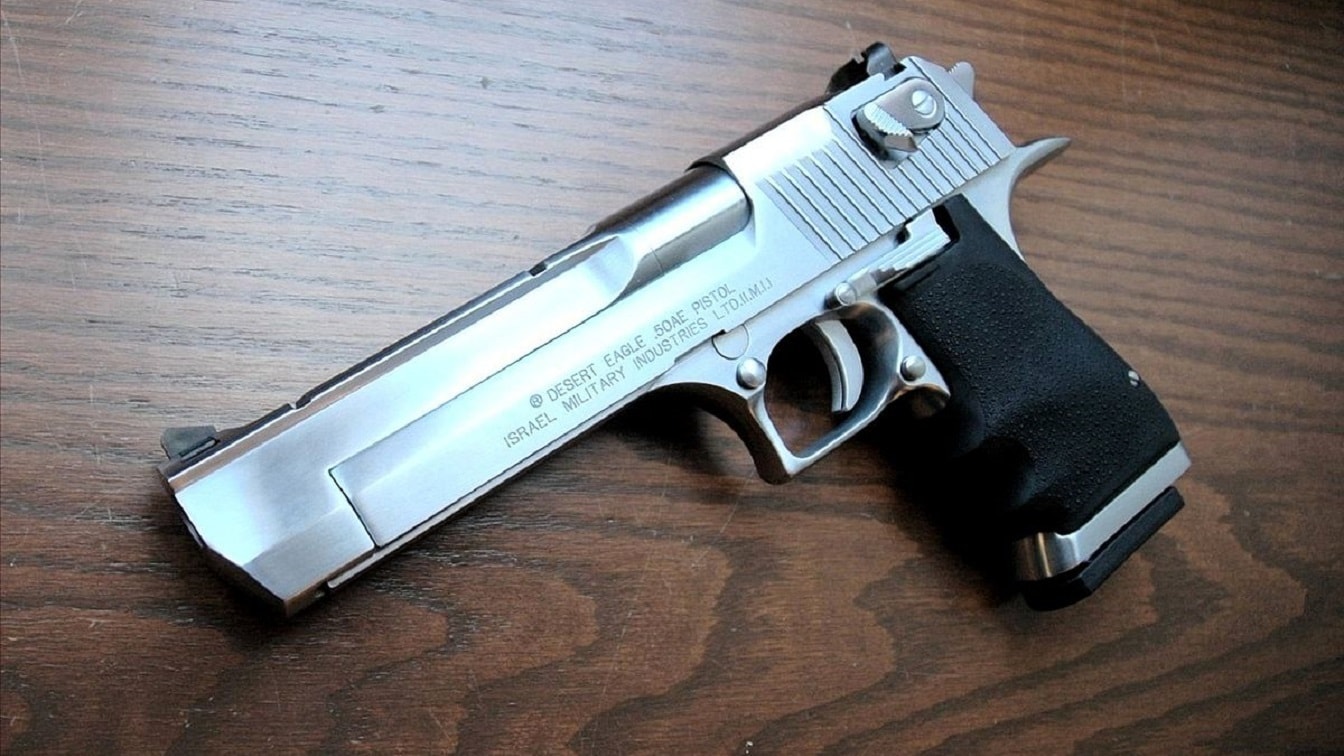 It’s old-school cool with a heck of a reputation behind it. You’ve seen it in more than a few movies and almost any shoot em’ up video games.

Is it practical for your average Joe? Absolutely not.

Am I still recommending it? Also a no.

The Desert Eagle, chambered in .50 AE (Action Express), of course, is a truckload of fun but there are more than a few reasons that it doesn’t get the seal of approval from me. If you want to know more about the Desert Eagle, read on.

The Desert Eagle is a massive pistol. Most pictures don’t really do it justice and with that size comes something less than desirable: a hefty weight. You can count on feeling a little tired at the end of range day with this gun. It’s almost 3 and a half pounds with an empty magazine. Yes, it’s obnoxiously heavy, but it’s also a beauty. It’s got bad-to-the-bone written all over it. You have a relatively small frame and a massive slide and barrel. I love the steel finish on my model. The weight is almost worth the aesthetics of the prolific Deagle.

I’d like to make a special note saying that the recoil isn’t nearly as bad as I thought it would be. They make effective use of their gas system and the weight of the gun that makes shots feel a lot less imposing. You won’t be rapid-firing this without any muzzle rise, but it’s definitely manageable compared to some of the high-caliber revolvers I’ve shot.

Accuracy was also surprisingly good. Most pistols can outshoot the shooter and it appears that the Desert Eagle is no exception. When set up in a rig, it was a tack driver at 25 yards. The story was a little different when I tried to shoot standing up. Targets were easy to hit when I was taking my time setting up, but follow-up shots weren’t as easy. The Desert Eagle has solid accuracy to offer, but it won’t blow you away.

My other gripe with this gun is the reliability. It’s super picky. I had plenty of malfunctions. I’m sure it varies from gun to gun, but it felt like my Deagle didn’t like the majority of what I was loading into it. This is quite as important since I don’t rely on this beast of a pistol for any important other than showing it off at the range. Still, malfunctions are almost always annoying and have the potential to be dangerous, especially in a beefy caliber like 50 AE.

There’s virtually no practical reason to buy a Desert Eagle. It’s unreliable and heavy. But it’s also extremely cool and my inner kid was fighting really hard to get me on board with this gun. It’s hard for me to recommend anybody buy this unless they have a lot of cash to burn. You won’t be finding a new one of these for under $1500. Would I buy it again? I kind of think I would, even though it’d be ill-advised. You just can’t beat the feeling of sending a hulking 50 downrange though.