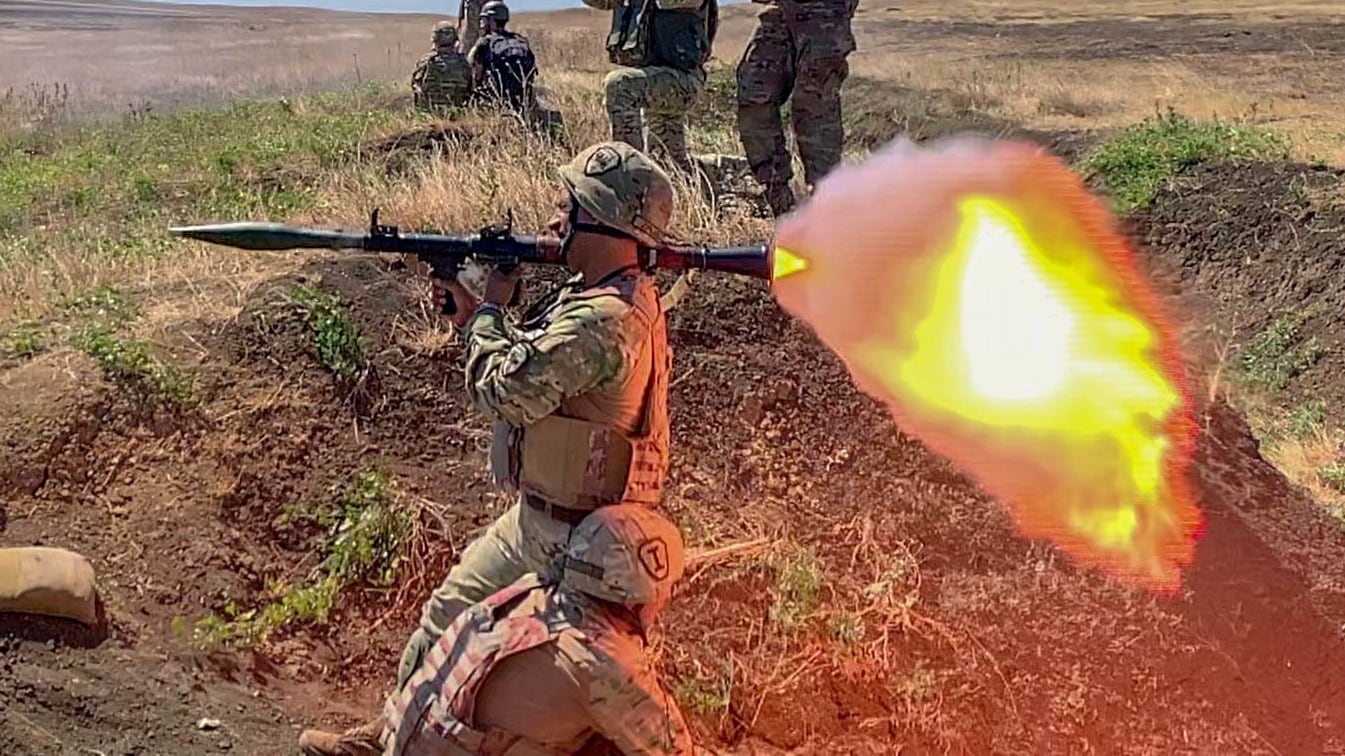 This deadly family of rocket-propelled grenade launchers has been around since 1949. Light, portable, easy to fire, and effective, the weapon is an ace on the battlefield and in use just about everywhere. Users can launch it at tanks, armored vehicles, bunkers, and even helicopters. It is used in more than 80 countries around the globe.

Below we present a short history of the deadly weapon of war that might be old but isn’t going anywhere.

The RPG began its development journey in the Soviet Union during World War Two, where surprisingly, the Red Army had no portable anti-tank weapon. The launcher’s development was based on a shaped charge. This innovation means that a cone-shaped material is attached to a hunk of metal. An explosive charge goes off behind it. This sends the blast through the cone to the tip of the projectile. It results in the shaped charge penetrating armor up to seven times the diameter of the original impact.

The Germans were the first army to use a high-explosive anti-tank launcher on a stick. The Americans had their bazooka. Then the Soviets went to work on their own design. The result was the RPG-2. RPG actually stands for Ruchnoy Protivotankovy Granatomyot, which is roughly translated as “hand-held anti-tank grenade launcher.” The RPG-2 was used extensively by the Viet Cong and North Vietnamese Army during the war in Vietnam.

Next Came the Rocket-Propelled Grenade Launcher-7

However, the RPG-2 just could not penetrate a tank’s armor very well. So, the Soviets updated it to the RPG-7 variant in 1961. This version proved extremely popular. It is cost-effective ($500 to $2,000 for a launcher) and is simple to train new users on the weapon. Every Soviet infantry squad had one.

The tube has a diameter of 40mm. There is no significant recoil, but there is a backblast. The rockets can travel 984 feet per second. The maximum range is 3,000 feet, but the RPG-7 is more accurate at shorter distances with an effective range of 656 feet. There are several different rockets and warheads that can be used. The RPG-7 is powerful enough to take out light tanks, armored personnel carriers, buildings, and bunkers. But it is surprisingly good against helicopters. The launcher shot down two U.S. UH-60 Blackhawk helicopters in Mogadishu, Somalia in 1993.

The Rocket-Propelled Grenade Launcher-7 Has Been Improved

The RPG-7V2 is a newer variant that improves the sight and range. New projectiles are up to 30 percent better at engaging targets. It is more effective at longer ranges against tanks and troops in the open. The RPG-V2 can even fire deadly thermobaric rockets.

The RPG-29 and RPG-30 Go Up Against Modern Tanks

The RPG-7 gave way to the more compact RPG-16 in the 1970s, which was designed for airborne soldiers and special operations forces. But it was the RPG-29 that leaped ahead with improvements. There was a concern among the Russians that the RPG-7 was not powerful enough to stop modern tanks such as the M1 Abrams and British Challenger.

The anti-tank RPG-29 is more accurate with twice the range of the RPG-7. It went to the troops in 1989 and was nicknamed the Vampire. It has a pistol grip and a bipod for firing in the prone position. It shoots the formidable 105mm PG-29V high-explosive anti-tank rocket with a tandem shaped charge. The Russians claim it can engage tanks with explosive reactive armor. The RPG-29 can not only penetrate tank’s armor, but it can also blast buildings and walls to target troops in urban and village combat.

The Rocket-Propelled Grenade Launcher is known for leaving a smoke trail when a rocket flies toward its target. This allows the defenders to see where the firing team is located. The RPG-29 has a “cold launch” feature which allows it to eliminate the smoke.

The RPG-29 was used effectively by Hezbollah against Israeli Merkava tanks in the 2006 war in Lebanon. In 2008, an RPG-29 damaged an M1 Abrams tank in Baghdad’s Sadr City during the Second Gulf War. RPG-29 rockets penetrated the two other Abrams tanks in Iraq.

The latest single-use RPG-30 fires two rockets at the same time. One is a 42mm and the other is a 105mm tandem high-explosive anti-tank round. The idea is to fool the modern active protection measures on a tank.

The RPG family has an illustrious history while being inexpensive and simple to use. The more powerful and modern variants stand ready to address modern tanks. There are numerous types of rockets that can be fired. They are a force multiplier on the battlefield. Thus, this deadly weapon of war will remain in service for years to come.