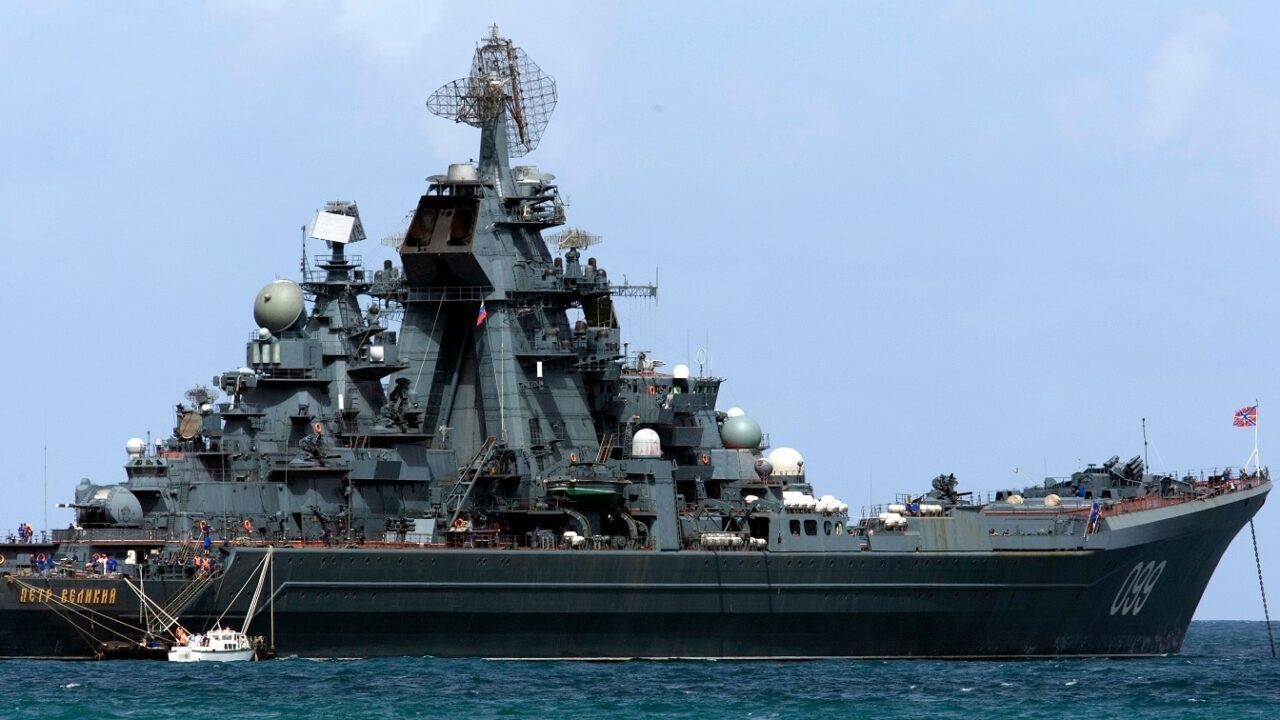 Russia’s Battlecruisers:  Kirov-class Heavy Surface Ship Ready to Dominate? When it comes to the Russian Navy, size still does matter.

The Russian Kirov-class battlecruiser is one of the biggest ships in the world aside from aircraft carriers and amphibious vessels. When the class came online in the 1970s and 1980s, the Americans later brought back four Iowa-class battleships briefly to answer the Soviet naval challenge.

And who can blame them? The huge Kirov-class battlecruisers were making quite the statement. Big ships can carry more missiles and today the Russians are trying to make the Kirov-class more lethal and survivable with improved cruise missiles and anti-aircraft defenses, perhaps they will even get rail guns, drones, and maybe even lasers at some point.

While certainly not new warships and part of the old-Soviet Navy, the Russians are not giving up on the heavy, nuclear-powered Kirov-class. The Petr Velikiy, with 700 sailors, has been at sea for years conducting numerous patrols and exercises. It is the flagship of the Northern Fleet.

Look Out Once They are Re-fitted with Modern Weapons

But the Russians have big plans for another Kirov-class ship. They have been doing renovations on Admiral Nakhimov for some time. The Nakhimov is getting major modern upgrades, especially with its armaments. The Kirov-class battlecruiser will carry Kalibr and Oniks anti-ship cruise missiles plus updated surface-to-air missiles and new anti-submarine systems. There are even Otvet missiles to take out submarines. Russians hope to deploy the Tsirkon hypersonic missile someday on the warship. Petr Velikiy may get the new weapons too. Sea trials on the upgraded Nakhimov will begin in 2023. However, we all know Moscow has a tendency to let important military readiness and testing dates slip, or never come to fruition at all.

The program started in the 1970s and by 1983, the Nakhimov became the third Kirov-class battlecruiser that came out of the Baltic shipyard in St. Petersburg. Passing sea trials in 1986, the Nakhimov joined the Soviet navy in 1988 under its original name – the Kalinin – before it was rechristened Admiral Nakhimov in 1992.

Their Mission Has Changed Since the Cold War

The ships weren’t originally designed to be missile cruisers. The Soviets first wanted the Kirov-class to focus on anti-submarine warfare by deploying a strong assortment of torpedoes and rockets. They also had launch tubes for cruise missiles and surface-to-air missiles, plus numerous guns and close-in weapon systems such as a 30mm Gatling-style gun. A total of 72 missiles could be carried. 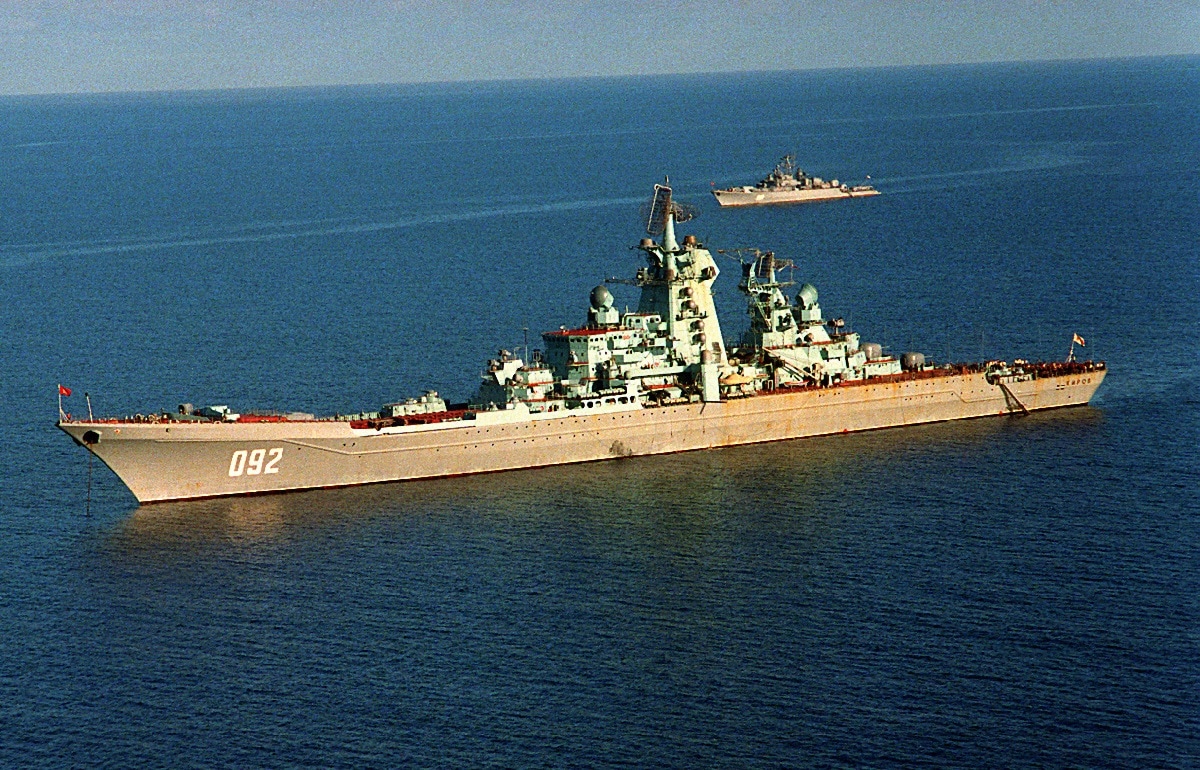 A port view of the Soviet nuclear-powered guided-missile cruiser KIROV at anchor. In the background is a Soviet Krivak I-class guided missile frigate. 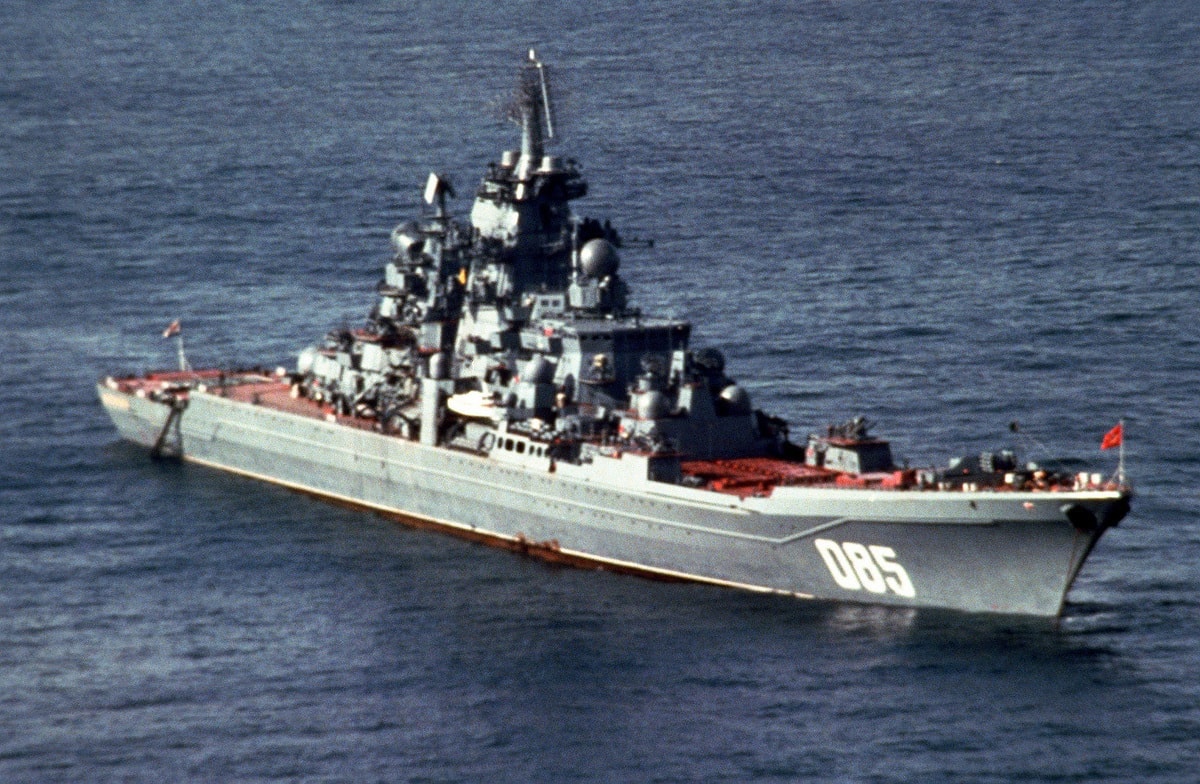 A starboard bow view of the Soviet Kirov class battlecruiser.

With a length of almost three football fields (827 feet) and displacing 28,000 tons, the Nakhimov is formidable. It can carry three helicopters in the stern for early warning and anti-submarine patrols.

Two KN-3 nuclear marine propulsion units power the battlecruiser with a top speed of 31 knots and at a cruising speed of 20 knots, the range is unlimited.

Could They Endanger U.S. Carriers?

The lethality of the Kirov-class could be a challenge for American carriers, especially with the modernization efforts and new weapons. The Russian ships are armed to the teeth. The Kirov-class boasts 352 vertical-launching cells. Compare that to the U.S. Navy’s Arleigh-Burke class, which has only 122 cells.

But the ships have been expensive to re-fit and maintain. Two of the Kirov-class ships were retired after the Cold War due to a lack of funding. They will be scrapped soon.

Watch Out for American Subs

The key to their success will have to be anti-submarine warfare. These old ships are likely loud and could be sitting ducks for American fast-attack subs, although they were originally built to counter American submarines. Thus, the Kirov-class crew must be fully trained for major offensive or defensive warfare. Modern missiles such as the Tsirkon hypersonic missile will need sailors who know what they are doing. Also, the Russians must develop officers who understand and excel at next-generation naval warfare.

The Petr Velikiy and Admiral Nakhimov (provided it gets to sea) are a powerful one-two punch for the Russian navy and will continue to serve in the coming decades. Most Russian ships are lighter and have fewer weapons systems such as the missile frigates and corvettes they have in service now. But the Kremlin can use these vessels for propaganda effect that showcases the might of Russian naval shipbuilding, even though the Nakhimov has been out of service for so long. The Russians could even build more Kirov-class ships someday, although considering how long the Nakhimov has been in re-fit and re-build that does not appear likely.