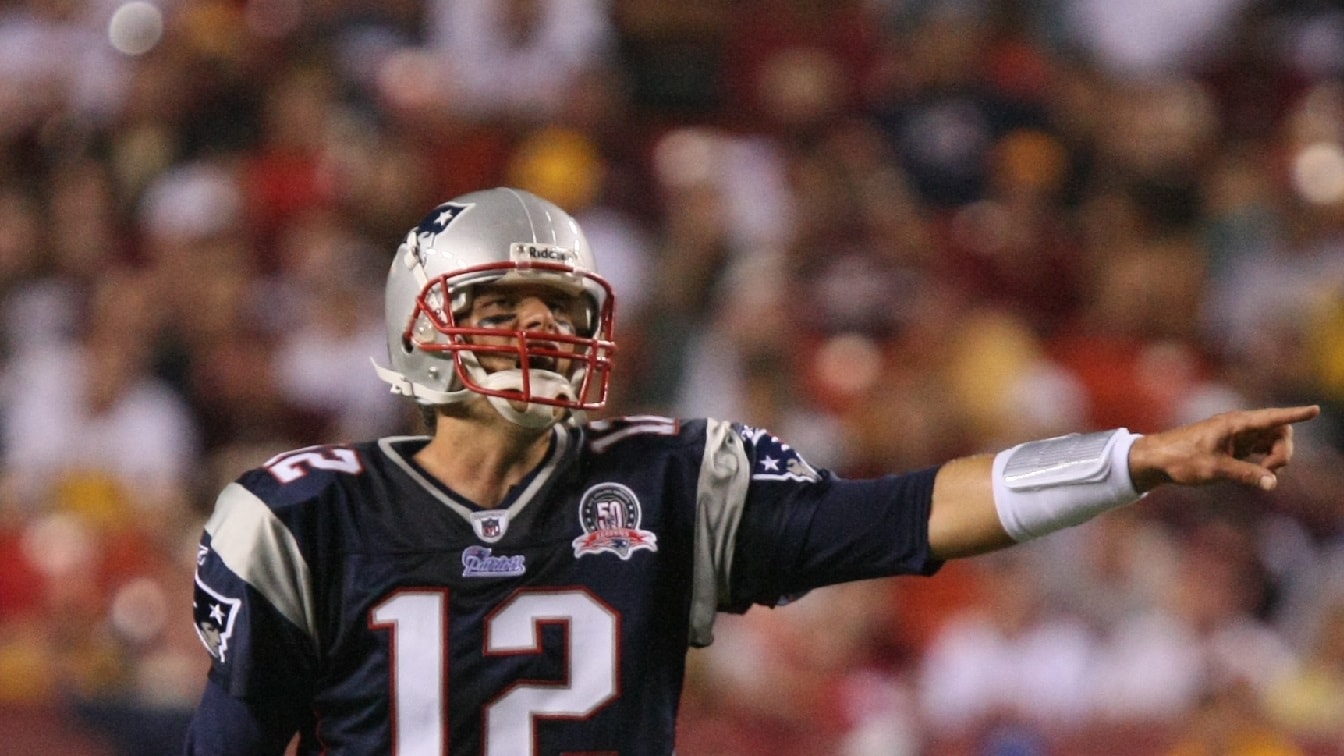 Should Tom Brady Still Be in New England?: Divorces rarely end well for both parties, even if both sides have the best intentions.

When it came to the Patriots and Tom Brady, no one in New England ever dreamed that the team and the quarterback that led them to nine Super Bowls, winning six of them would ever drift apart. New England expected Brady to retire as a Patriot and spend his entire career there.

Tom Brady and the Patriots: A Break Was Always Going to Happen?

But those closest to Brady thought otherwise. His father Tom Brady Sr. back in 2015 stated that his tenure with the Patriots would not end in the fairy tale manner of his son riding off in the sunset.

“It will end badly,” he said. “It does end badly. And I know that because I know what Tommy wants to do. He wants to play till he’s 70. … It’s a cold business. And for as much as you want it to be familial, it isn’t.”

Back then we media and fans scoffed at the notion. As cold-blooded as Bill Belichick and the Patriots can be when it comes to contracts, this rule didn’t apply to Brady …right?

Bill Belichick has always stated that he would rather part ways with a productive player a year too early than a year too late. In this case, the team was off the mark by several years. And although the team was lucky that all of the pieces fell in place after just one year of mediocrity and they found their QB of the future (and present), it was a huge tactical and strategic blunder by the Patriots.

Last year, in the 2020 season, Brady went to Tampa Bay and threw for 40 touchdowns and led the Buccaneers to a Super Bowl throwing 10 more touchdowns in the postseason.

In the 2021 season, Brady leads the NFL in passes attempted, passes completed, and touchdown passes. Regular season records? He has the most regular-season (240) and postseason (34) victories among NFL quarterbacks. His combined regular-season and postseason winning percentage of .767 is the highest of any quarterback who has started at least 100 NFL games.

He has shown no signs of slowing down even at age 44. He’s said many times that he wants to play until age 45. It appears he could play at a ridiculously high level well past that.

Why The Divorce? Money, Assumptions, and Respect?

So what were the Patriots thinking back in 2019?

The relationship with the Patriots actually started to go south well before that. In 2017, the Patriots rolled to a 13-3 record, and Brady was the MVP at the age of 40. And then in three playoff games, Brady was superb, passing for 1132 yards and 10 TDs.  He set a Super Bowl record throwing for 505 yards along with 3 TDs against the Philadelphia Eagles. 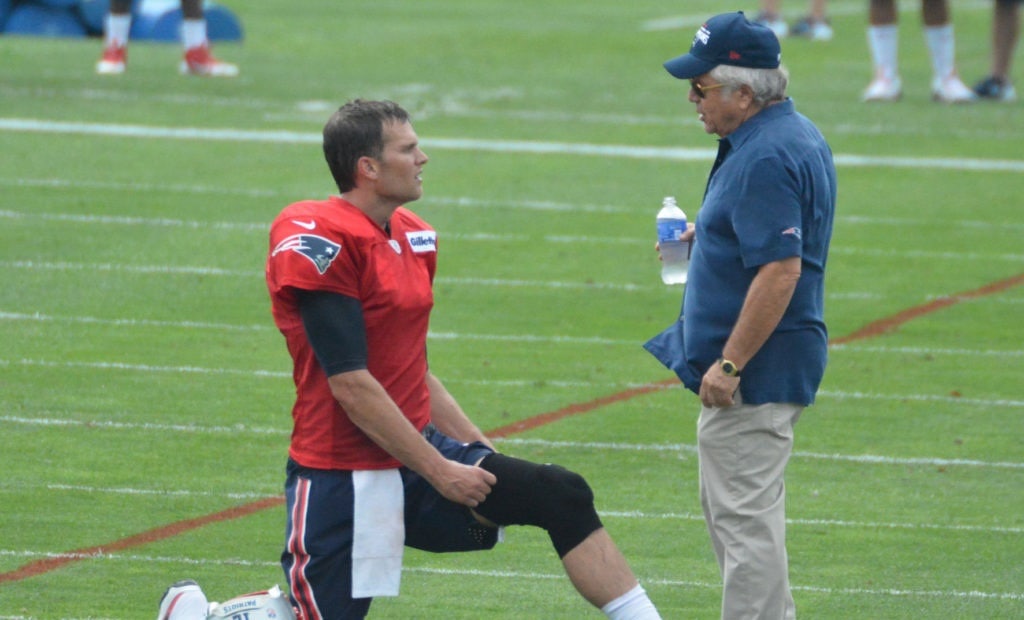 Brady was the face of the franchise and up for a new contract. But rather than sign him to a multi-year contract, the Patriots misplaced their checkbook. The team wanted to go year to year, Brady wanted the stability of a multi-year deal. He was essentially a one-year deal worth $15 million, plus $5 million in performance incentives, none of which was earned. As his supporting cast around him began to diminish, so too did Brady’s numbers, which the Patriots and the Boston media believed that he was declining, even though the team returned to the Super Bowl in 2018 and won it.

In 2019, everything that had been simmering came to a head. Brady felt very unappreciated by both the Krafts, with whom he had almost a family relationship with and the Patriots. Brady had always taken a “home team discount” in relation to his contracts. Business Insider calculated that Brady left $60 million on the table so that the Patriots could surround him with talent during his tenure with the team. And then when the rubber hit the road, they acted like “what have you done for me lately?” as if a Super Bowl win wasn’t a big deal. Brady said so much in an interview with Jim Gray on Westwood One.

In the spring of 2019, I spoke to a close friend of Brady’s who told me that an agreement was in place for a three-year deal that would keep him in place for the foreseeable future. But it was never put on paper. Later it was said that Belichick nixed it, which didn’t jive with what I was told. But those things happen. Was it Belichick that pulled back or the Krafts? I am leaning towards the latter, but we’ll never really know.

That summer, the Patriots and Tom Brady agreed to a two-year extension that was all voidable after the 2019 season. Brady’s salary increased by $8 million to $23 million while saving the Patriots a reported $5 million against the salary cap in 2019.

“One of the most notable parts of Brady’s two-year extension is the two seasons added are void years, according to ESPN’s Field Yates. What that means is the extension gives Brady an $8 million raise this season, and then the sides can –and likely will — adjust the contract in 2020 and 2021.”

Brady, even with the pay increase was the 11th highest paid QB in 2019, but he had enough. The day after the contract details were released, he and his wife, supermodel Gisele Bundchen placed their home, next door to Patriots’ owner Robert Kraft’s home on the market. The bridges were burned. Brady was unnaturally surly and short with his answers during training camp in 2019. He was asked about his contract after practice one hot summer day and he gave a diplomatic answer.

“We’re all day-to-day if you think about it,” he answered. “None of us are really promised anything. So, I’m trying to do the best I can today and just let those [contracts] things sort themselves out… so, we’ll see how it goes.”

Things didn’t change much during the season, even though the Patriots started off the 2019 season hot. Brady said in an interview with NBC Sports Boston that he was the “most miserable 8-0 quarterback in the NFL.”

As soon as the 2019 season was over, Brady was testing free-agent waters for the first time. The Patriots threw out another one-year deal offer, but the Tampa Bay Bucs offered him a two-year deal worth $50 million dollars. And just like that …Brady was gone.

Ever the team player, Brady always eschewed personal accomplishments, a point he reiterated in his statement announcing that he was leaving. “Although my football journey will take place elsewhere, I appreciate everything that we have achieved and am grateful for our incredible TEAM accomplishments,” he posted.

The Patriots were tight against the salary cap in 2020, and then had eight players who were projected to be either starters or play a prominent role opt-out of the season due to COVID-19. Late in June, the team, which had no succession plan in place to replace Brady, signed Cam Newton.

Newton wasn’t a fit for the Patriots’ style of offense that they ran for the past 20 years. He struggled and the team limped to its first losing season (7-9) in 20 years. A major rebuild was needed. But flush with salary-cap space this spring, they spent lavishly and rebuilt many of the holes in their roster.

Even better for the team, Alabama QB Mac Jones fell right into their lap with the 15th pick in the NFL Draft. He’s a perfect fit for their offense and is off to a very solid start to his career. And it must be added that had they kept Brady, the amount of cash that they had available and spent this spring would have been cut way back.

The Boston sports media who every year kept saying that they could see a dropoff in his game, were left with little to say after he lit up the scoreboard in 2020, with a much more talented Bucs team, culminating in a Super Bowl blowout of the Chiefs.

The 2021 season has been more of the same. As mentioned above, Brady continues to light it up and is 10 yards away from passing for 5,000 yards to go along with 40 TD passes this year.

Tom Brady Sr. spoke to the media before Brady and the Bucs paid a visit to Gillette Stadium in Foxboro earlier this year.

“My feeling is that Tommy is extraordinarily appreciative of everything that happened during his New England career, and he’s more than happy that he’s moved on, because it was pretty obvious that the Patriot regime felt that it was time for him to move on. And frankly, it may well have been the perfect [time] for Belichick to move on from him. On the other hand, I think the Tampa Bay Bucs are pretty happy that the decision was made in Foxboro that they didn’t want to afford him or didn’t want to keep him when his last contract came up.”

Tom Brady will turn 45 in August. Will he retire this offseason? Don’t bet on it. Despite finding their QB of the future this spring, it was a blunder by the Patriots to let him go.