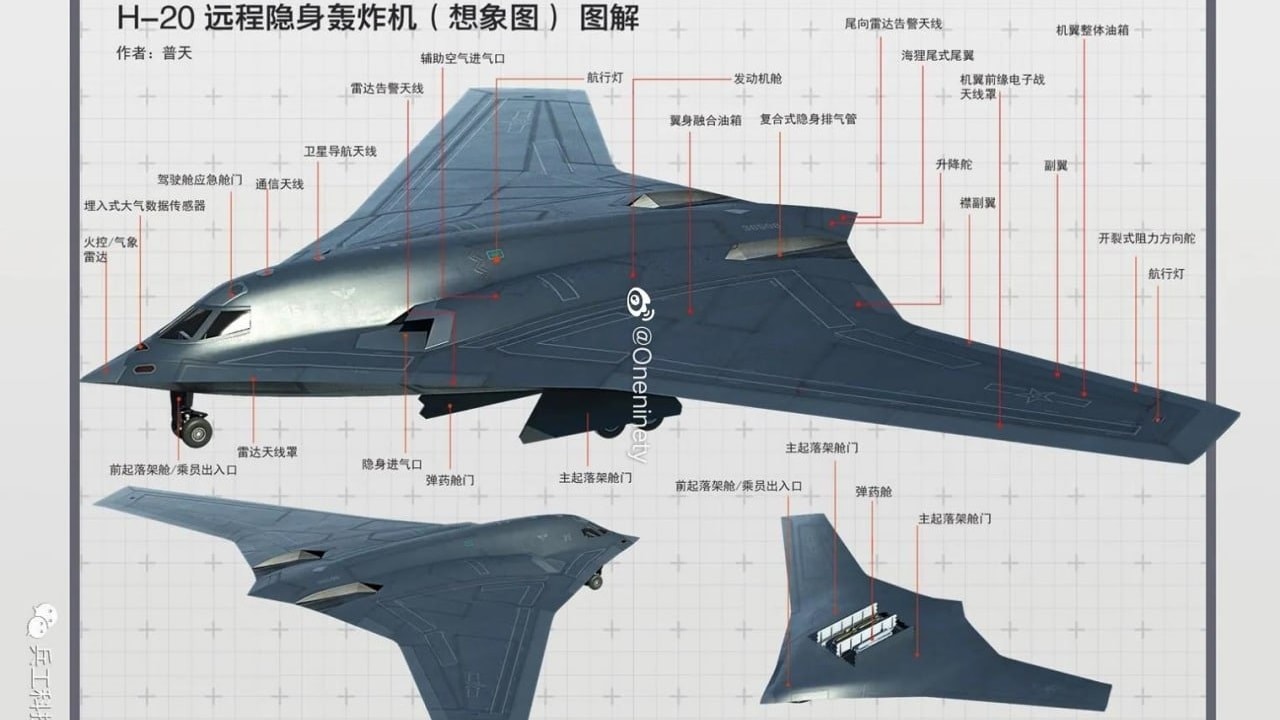 The H-20 Stealth Bomber has been in many press reports, and yet, we know very little about what China is planning. Here is what we know so far – Although China’s upcoming advanced bomber shares some crucial aspects with the American B-2, it differs in several key elements.

The Xian H-20 is an advanced — and as of now — likely prototype stealth bomber in development by the People’s Liberation Army Air Force, communist China’s flying branch. Unfortunately, the strategic bomber is known only from a small handful of images gleaned from online sources. And while a complete overview of the aircraft is not yet possible, we can still glean a few crucial details.

The Xian H-20 shares a few characteristics with the United States’ stealth bomber, the B-2 Spirit. A Chinese military recruitment video showing the bomber revealed little, though the bomber’s general shape is reminiscent of the B-2’s flying wing design from what can be gathered.

The flying wing design is one of (if not the) stealthiest type of airframe currently known. Unlike traditional airplanes that feature a conventional tail with horizontal and vertical control surfaces, both the Chinese H-20 and American B-2 eschew radar-reflective tails. Instead, the airframes rely on controls surfaces that run along the back of the flying wing design for maneuverability.

However, it could be the case that the H-20 takes a more hybrid approach, opting instead for ruddervators, essentially a V-shaped tail that combines horizontal and vertical tail control surfaces. Though not as “stealthy” as a true tailless design, a ruddervator simplifies control and adds a degree of maneuverability.

Like the B-2, the Xian H-20 appears to have dual engines buried within the airframe and the distinct beak-shaped nose of the Spirit, according to recently seen computer-generated images of the bomber.

Based on computer-generated images, some analysts believe the H-20 could be able to strike targets on or near the second island chain. Though definitions differ slightly, the second island chain stretches roughly from Japan’s Bonin island group to Guam, the westernmost parts of the Caroline Islands, and down into Western New Guinea, forming what is essentially the eastern part of the Philippine Sea.

Still, that pales in comparison to the B-2 Sprit’s range: nearly 7,000 miles, just 500 miles less than the distance from Sydney to Los Angeles. Moreover, the B-2 can also take on fuel while in flight, drastically increasing the bomber’s range.

Though many details on China’s Xian H-20 remain unknown, whatever the bomber’s characteristics are, it will in all likelihood be the first Asian stealth bomber — and that reason alone is cause for concern considering the state of various arms building in the wider Indo-Pacific region. Still, the United States military also has another and likely more powerful stealth bomber in the works: the highly-anticipated B-21 Raider.

Caleb Larson is a multimedia journalist and defense writer. A graduate of UCLA, he also holds a Master of Public Policy and lives in Berlin. He covers the intersection of conflict, security, and technology, focusing on American foreign policy, European security, and German society for both print and radio. Follow him on Twitter @calebmlarson.