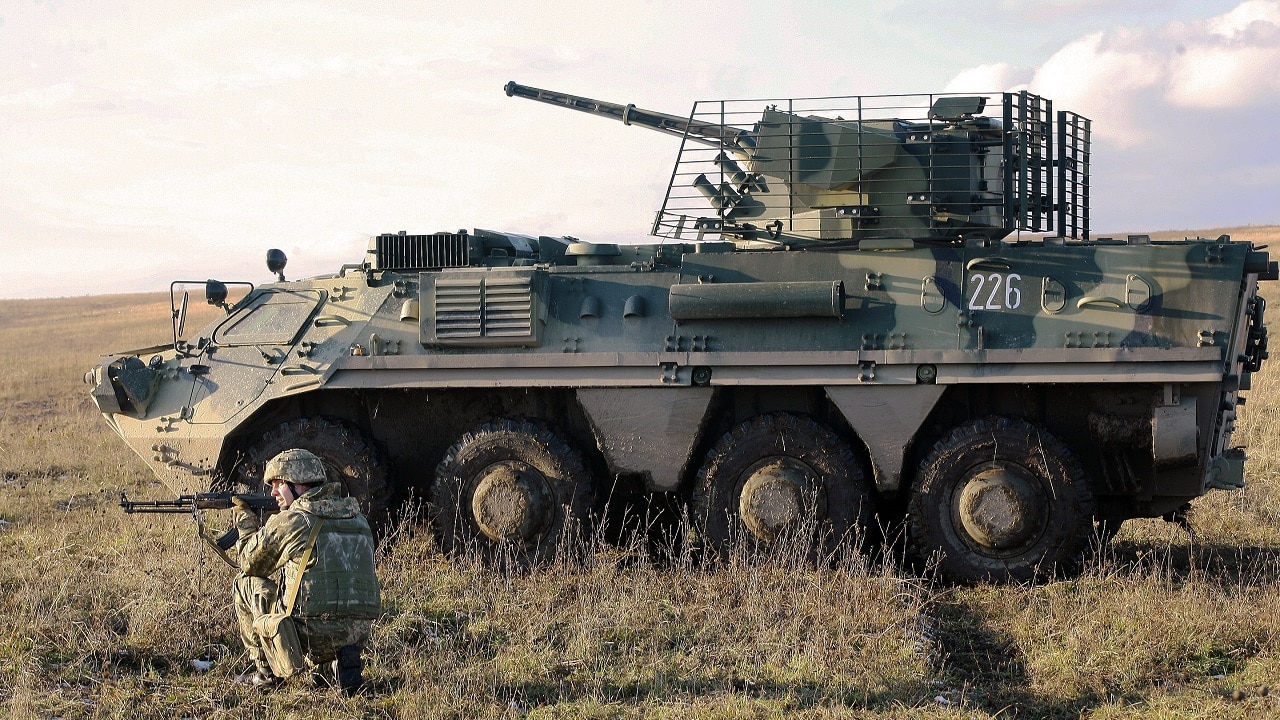 Russia’s invasion of Ukraine has produced thousands of images and videos of armored vehicles getting ambushed, destroyed, and abandoned. But there has been relatively little imagery of combat between fighting vehicles.

One notable exception is a recording that surfaced on March 14, taken inside a Ukrainian eight-wheeled BTR-4E infantry fighting vehicle (IFV) skittering frenetically in the streets of Mariupol, a besieged coastal port surrounded by Russian forces.

The recording shows the video feed from the BM-7 Parus (“Sail”) weapons turret on top of the vehicle. The gunner remotely controlling the turret is faintly reflected on the monitor.

As indicated on the top left corner of the monitor, the BTR-4’s turret is turned 90 degrees to one side, allowing the vehicle to quickly roll forward and engage adversaries across side streets, then scoot away to escape retaliation.

In the first recorded engagement, the gunner spots a hostile T-72B3 main battle tank a short distance away that could swat the Ukrainian troop carrier like a fly with its 125-millimeter gun.

While the driver hastily rolls away, the gunner has time to rake the unsuspecting T-72’s side armor with 30-millimeter shells, causing small explosions—possibly detonating explosive-reactive armor bricks girding the behemoth.

In the second engagement, the Ukrainian crew ‘peak’ around another intersection and discover a more suitable adversary just around the corner: a BMP-series fighting vehicle (or the BRM-reconnaissance subvariant), its gun turret slewed aside, the feet of disembarked infantry visible beneath its hull.

Being first to spot and shoot is the best predictor of victory in an armored battle. And that’s exactly what happens—before the BMP crew can react, the Ukrainian gunner rotates the turret and pummels the vehicle with cannon fire, causing glowing metal fragments to spray in the air and equipment to fly off.

After overcorrecting the aim downwards, a shot finally slams through the vehicle’s front hull, causing it to erupt in flames. The BTR-4 then rolls back out of the line of fire.

This engagement marks a triumph for a truly Ukrainian armored vehicle that has ridden an especially bumpy path over the years.

In the mid-2000s, Ukraine’s arms industry saw an opportunity to sell wheeled infantry fighting vehicles that were more heavily armed and advanced than Russian Soviet-era BTRs then available—but cheaper than Western ones.

It had already developed two evolutions of the Soviet eight-wheeled BTR-80 APC: the BTR-94 armed with a 23-millimeter gun (50 exported to Jordan/Iraq), and the 30-millimeter armed BTR-3, hundreds of which were sold to Myanmar, Nigeria, Thailand, and the UAE.

But these inherited BTR-80’s configuration with the engine situated in the rear, meaning onboard infantry had to awkwardly disembark from a side hatch, rather than more safely from the rear, shielded by the vehicle’s bulk.

For the BTR-4, dubbed the Bucephalus after Alexander the Great’s fierce black warhorse, the Kharkiv Morozov Engineering Design Bureau sought to move past the Soviet design paradigm by situating the engine between the crew (who could exit from slanted side doors at the front) and the infantry, who could now exit via doors to the rear. This also made it easier to install varied modular systems in the hull.

Indeed, the Bucephalus could mount a variety of weapons turrets, but the only operational configuration uses the remote-control BM-7 Parus turret, which doesn’t take up space inside the hull, leaving room for 7-8 embarked infantry.

The BM-7 sports a 30-millimeter autocannon, a KT 7.62-millimeter machinegun, and six 81-millimeter smoke grenade dischargers. The cannon (akin to Russian 2A72) is effective out to 1.24 miles, and can penetrate just over 1” of armor at 1 kilometer: adequate to threaten other Soviet-era IFVs and APCs, less so heavier IFVs like the M2 Bradley. 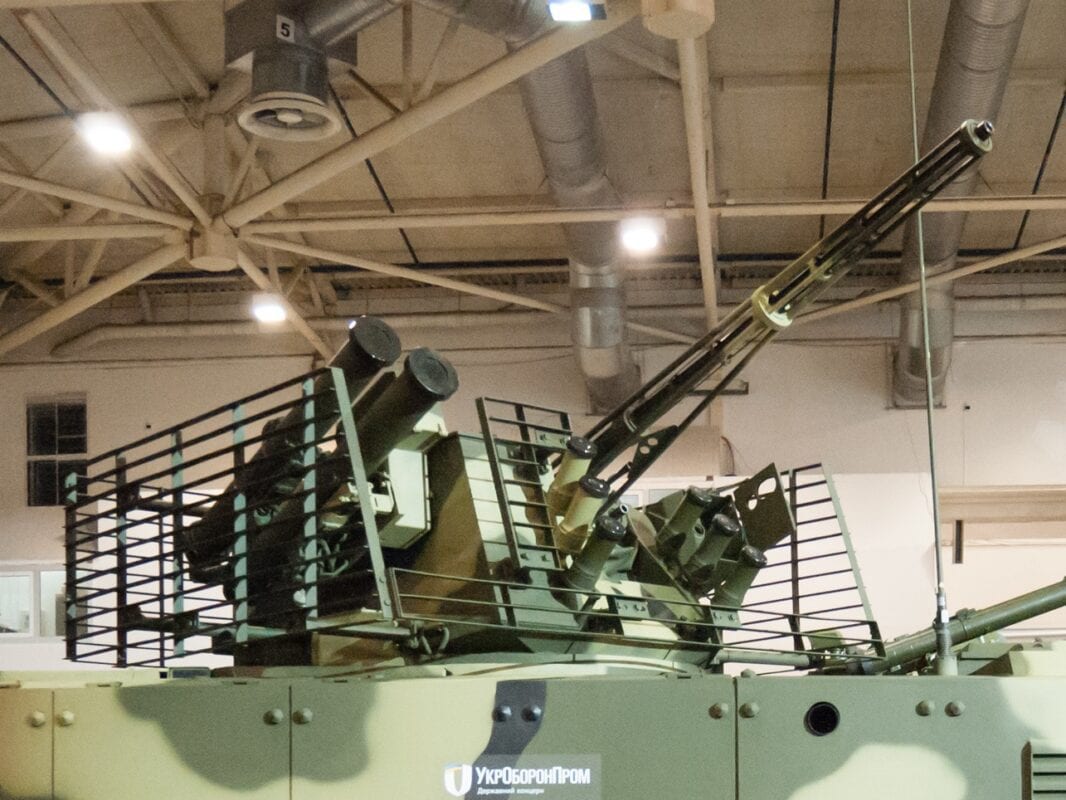 However, the turret can also mount two Barrier laser-guided anti-tank missiles. These are effective at ranges between 300 feet to 3.1 miles, and can penetrate 32 inches RHA equivalent with a tandem-charge warhead. Alternatively, one missile can be swapped for a 30-millimeter automatic grenade launcher for additional anti-personnel firepower.

The video below shows a BTR-4 sniping a separatist truck from afar using a Barrier in 2017.

The BTR-4 is compatible with a range of engines, though originally BTR-4Es used 400-horsepower ZTD-03 engines, still powerful enough to accelerate the 18.5-ton vehicle to 68 miles per hour on road, or 37 off-road.

The BTR-4 is also amphibious, using two waterjets in the rear hull to swim at up to 6 miles per hour.

However, the BTR-4’s amphibious capabilities hasn’t been rated well in trials.

In 2009, the reconstituted Iraqi Army, looking for modern APCs at a bargain price, ordered 420 BTR-4Es and six An-26 cargo planes as part of a $550 million arms package financed by the U.S.

But Ukraine’s export success soon foundered due to serious inefficiencies in its arms industry, including teething issues with the cannon, resulting in delivery delays of 6-18 months, and low-quality rush jobs to make back time. Of the first 88, BTR-4s received, only 56 had working engines.

The fourth batch of BTR-4s shipped to Umm Qasr in June 2013 was outright refused by Iraqi inspectors due to cracks in their 71-grade steel hulls, some of which had been painted over.

That batch was returned to Ukraine, though the Iraqi Army still ended up accepting 128 BTR-4s which it used in combat against ISIS, in one offensive reportedly defeating multiple ambushes.

Iraq’s refused BTR-4E shipment did have a silver lining: when war with Russian-backed separatists erupted in 2014, the BTR-4s, still in desert camouflage, were promptly integrated into the Ukrainian National Guard units.

These first saw action on June 14, 2014, amidst the two-month battle for the city of Sloviansk. A Ukrainian news account describes the aftermath:

“On the [BTR-4E], the hull is scorched by RPG shots, pockmarked by assault rifle rounds. Headlights are shattered by shrapnel. Cage armor is scarred, the wheels are pierced. But the BTR-4E survived the battle. The crew was wounded, but both equipment and personnel managed to evacuate the battlefield.”

Even the armored glass windows withstood high-velocity sniper rifle fire. Allegedly only one Ukrainian soldier was killed in a BTR-4E throughout 2014, though separatists did capture at least two.

In 2016, Kyiv ordered 45 BTR-4E1s with improvements based on battlefield experience, including modular armor that could be installed, repaired or replaced in the field. Furthermore, armored windows were proofed against 12.7mm-caliber rounds, mine protection beefed up, weapon controls and ammo feeds streamlined, and an auxiliary power unit added to enable turret operation with the motor off.

New production required indigenization of a vehicle that formerly relied 45% on Russian parts. By 2017, 88% of the parts were sourced domestically.

Meanwhile, designers in Kharkiv developed the next-generation BTR-4MV1 with a completely redesigned sloped front hull with the glass windows replaced by small vision slits and a panoramic camera system. Armor was reinforced to NATO standard level 3—resistance against machinegun rounds—causing weight to increase to 24-25 tons.

The Kharkiv bureau blamed the glacial manual welding methods of the Lozova Forging and Mechanical plant, which retorted its participation only began after the Kharkiv plant was already behind schedule. The companies had to lobby Ukrainian President Zelensky to waive $3.3 million in later delivery penalties.

After re-welding, the formerly defective vehicles were riddled with bullets in tests which apparently verified their structural integrity.

10 BTR-4ENs were also sold to Nigeria and have seen action fighting Boko Haram, with one captured in 2021 and another destroyed in a raid.

In 2019 a joint venture for licensed production in Myanmar debuted, a project which may come under scrutiny due to the abysmal human rights record of its military dictatorship. Other possible license-production have fallen through.

By 2022, the Ukrainian army disposed of at least 76 BTR-4Es, mostly in the 25th Airborne Brigade deployed near Donetsk, the Zhytomyr-based 95th Airborne Brigade which has harried Russian forces west of Kyiv, and the 92nd Mechanized Brigade. This last dealt Russian forces besieging Kharkiv a series of heavy blows, including allegedly destroying the 488th Motor-Rifle Regiment. Ukraine’s National Guard also retains at least 62 BTR-4Es, including in the controversial Azov Regiment defending Mariupol. 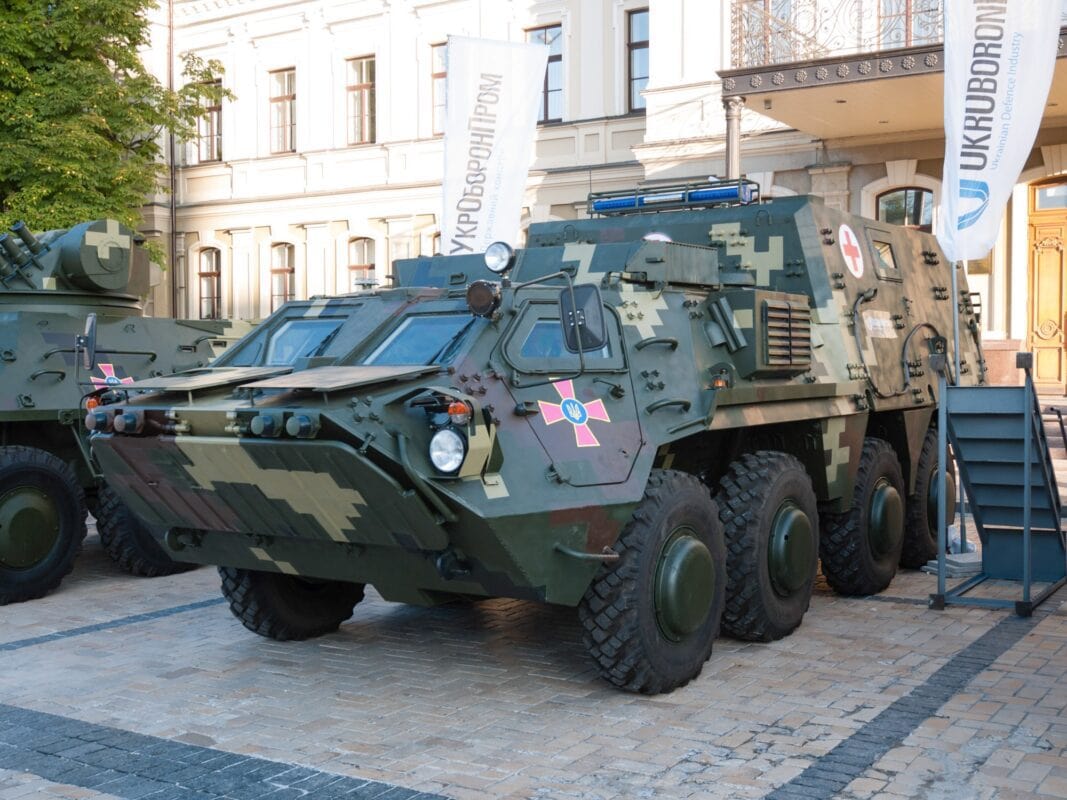 By the third week of the Russian invasion, the BTR-4 fleet had suffered substantial losses, with at least eight confirmed destroyed, and another 14 captured or abandoned, one of which has been hauled into Russia for study.

#UkraineWar: The Ukrainian Army lost another BTR-4 IFV in Mariupol. This is the 20th BTR-4 visually confirmed to have been lost by Ukraine. pic.twitter.com/5hu7tztQkH

One apparently fell victim to a Russian drone or laser-guided artillery strike.

Destruction of BTR-4 with UAV pic.twitter.com/JvJCZu7bsD

Ukraine’s military wanted Kharkiv to develop a successor, preferably with a mine-resistant V-shaped hull, heavier armor to achieve Bradley-level protection against 30-millimeter autocannons, and possibly a larger gun. There were also projects to develop a MOP-4k mortar carrier and unmanned combat vehicle variant.

But future projects are contingent on survival today. Ukraine’s surviving BTR-4Es will play an important role not only in defending Kharkiv, Kyiv, and Mariupol, but transporting infantry in counterattacks seeking to dislodge besieging Russian forces.