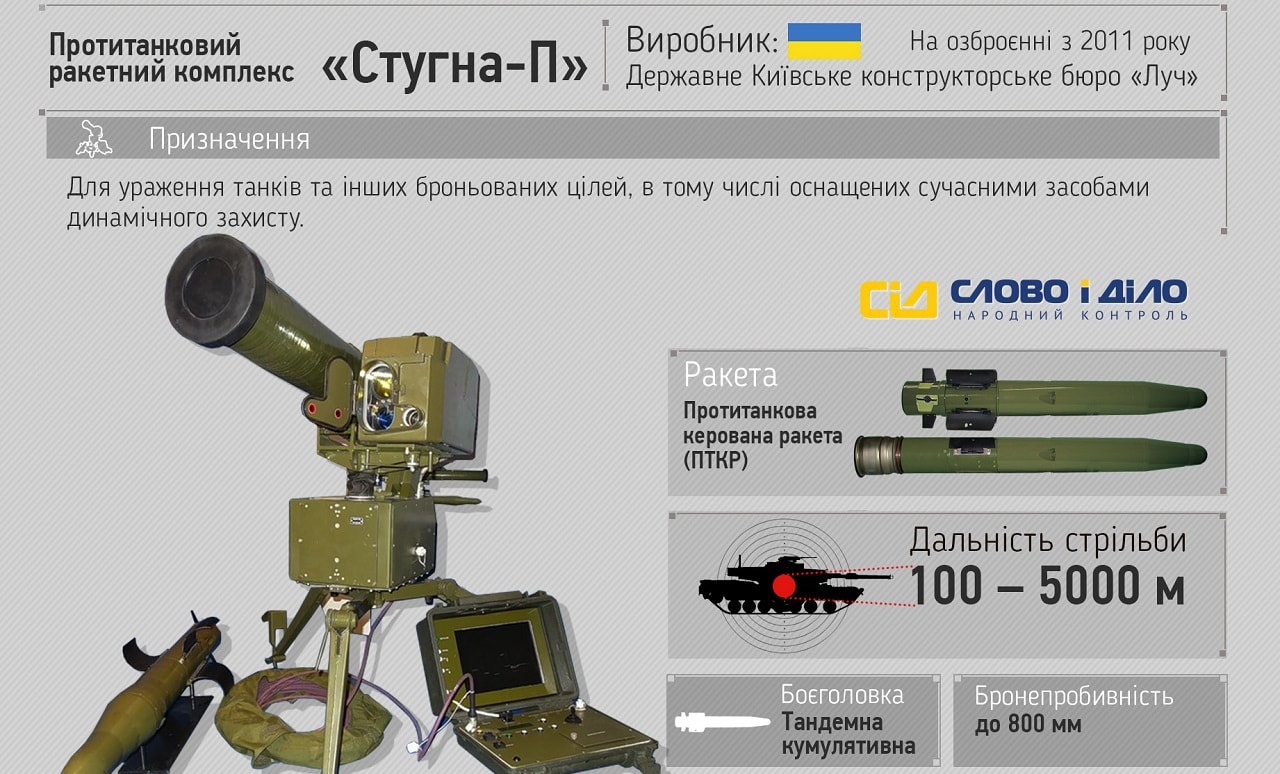 A month into its struggle against the Russian invasion, Ukraine’s military has received well over 5,000 Javelin ATGMs from multiple countries and Milan missiles from France. The hi-tech Javelins have deservedly received attention, but Ukraine is employing in even greater numbers a home-developed ATGM called the Stugna-P which also appears to be making a killing on the battlefield.

The 200-pound Stugna-P is less portable and lacks some cutting-edge attributes of the Javelin—which allegedly costs three times as much. But the longer-ranged Ukrainian missile has its own smart design features that appear to be proving its worth.

Admittedly, the Stugna-P is in many ways comparable to established ATGMs like the Russian Kornet and U.S. TOW. It has a sight/guidance system which can lock onto a distant target, or the operator can semi-automatically steer the missile in flight by aiming a targeting reticle. Either way, the fire control system calculates course corrections and uses a laser on the launcher to transmit them to the missile via an optical receiver on its tail.

The missile can be programmed to dive down from 10 meters high towards the thinner top armor of a tank, though at a shallower angle than would a U.S. Javelin missile. This capability can be seen in some combat footage.

There’s a more powerful 152-millimeter caliber RK-2M missile that can penetrate 1100 meters RHA and has 10% greater range and speed, but it’s unclear whether Ukraine uses it operationally. For anti-personnel targets there’s also high-explosive and thermobaric variants.

The Stugna differs, however from many ATGMs in its control system, which allows the three-person crew to set up the launcher on its tripod from an ideal firing position, and remotely control it from cover, or even from an underground bunker, using a laptop-like control system connected to the launcher by a 50-meter-long cable.

That’s especially useful, as attacking the operator, either with preemptive artillery barrages or even with tank gun while the missile is midflight (a Stugna could take up to 25 seconds traversing its maximum range of 3.1-3.4 miles) is a classic counter-tactic.

The Stugna’s remote set-up isn’t entirely unprecedented. It’s reminiscent of the first successful Soviet ATGM, the 9M14 Malyutka (NATO codename AT-3 Sagger), which was manually steered using a joystick-like device tethered to the launcher by a 15-meter wire. Some variants of Israeli Spike ATGM have remote firing capability too. But U.S. troops operating TOW ATGMs still must situate themselves in line-of-sight of retaliatory fire to engage targets.

The Stugna’s remote control system has a secondary benefit: its video feed has proven convenient for recording the dramatic destruction of enemy vehicles for propaganda purposes. The media isn’t saved directly by the fire control system (at least not that released to the public), but rather captured by soldiers’ cell phone cameras during the attack.

The propaganda effects of such combat footage were illustrated in 2020 in the Nagorno-Karabakh conflict when Azerbaijani TB2 drones recorded the destruction of hundreds of Armenian vehicles and artillery systems. The torrent of verifiable footage solidified Azerbaijan’s narrative of inevitable victory.

That’s important when one remembers that wars almost never end with the complete destruction of the opposing side’s armed forces. Rather, defeat usually occurs when one or both sides lose the will to continue fighting. Video after video of armored vehicles being picked off sustains belief on the Ukrainian side that the war is winnable, and undermine claims by Moscow’s trolls and spokespersons that Putin’s invasion is “proceeding as planned.”

The Stugna-P is one of the more successful products of Ukraine’s post-Soviet defense industry, which too often has struggled to realize promising projects due to inefficiency and inadequate funding.

In the 1990s, Ukraine’s Luch State Design Bureau developed a Stugna R-111 missile for firing from the 100-millimeter guns of the thousands of T-55 tanks and MT-12 anti-tank guns in service across the globe. In the mid-2000s, this was used as the basis for a project to create a dismounted 130-millimeter caliber missile system called the Skif (“Scythian”) using a Belarus-developed Peleng PN-C guidance system. Various Skif systems, some using Turkish sights, have been exported to Algeria, Azerbaijan, Morocco, Qatar, and Saudi Arabia (30 launchers, 200 RK-2C missiles).

In 2011, Ukraine’s military adopted limited numbers of its own variant called the Stugna-P using a Ukrainian 33-pound PN-I sight/guidance system. When fighting with Russian-backed separatists erupted in 2014, that inventory (possibly just 10 launchers, 75 missiles) was given to paratroopers defending the Luhansk and Donetsk International Airports. At Luhansk, a launcher was installed on top of the control tower and remotely operated from inside.

On March 2015, Kyiv ordered mass production of the missile which was obviously useful for countering Russian and separatist armor in Eastern Ukraine. In the following years, Stugnas were extensively used as a precision-strike weapon against separatist vehicles and heavy weapon nests along the line of contact in Donbas. It’s believed at least 7,000 Stugna missiles were delivered by 2021.

At least 102 Stugna-P launchers were fitted with Turkish Aselsan EYE-LR S thermal cameras with a daytime target ID range of 9.3 miles, and nighttime sighting out to 3.5 miles for tanks and 1.55 miles for personnel.

The Stugna is not Ukraine’s only indigenous anti-tank weapon seeing combat. The lighter (roughly 70 lbs.) RK-3 Corsar, which entered service in 2017, fires a 107-millimeter missile with a range of 1.55 miles and penetration of 550 millimeters RHA equivalent using a tandem charge. Later-production RK-3s use a Greek thermal camera that can vehicle targets at night out to a mile away.

One of the few times we've actually seen the RK-3 Corsar ATGM in combat use, Kyiv Oblast, #Ukraine pic.twitter.com/f8OpXnjFvQ

There is also the Barrier anti-tank missile system, which integrates Stugna missiles on Ukrainian tracked BMP-1M and wheeled BTR-3E1 and BTR-4E fighting vehicles, Mi-8 and Mi-24 helicopters, and even Gyurza-M artillery boats.

It also fields 9P149 Shturm-S vehicles, high-end tank-killers combining the ubiquitous MT-LB tracked APC chassis to a launcher for 9M114 Cocoon missile (NATO codename AT-6 Spiral) on a retractable probe, so that the crew could spot and shoot at tanks without exposing their vehicle’s thinly-armored hull. The Cocoon missile flies at supersonic speed, faster than most ATGMs, but lacks a tandem charge. The 9P149’s autoloader (see in action here) allows three or four of the radio-command guided missiles to be launched per minute.

While Ukraine counted 108 Shturm-Ss in its inventory in 2011, only a handful was operational when fighting erupted in 2014, with missiles that had expired their shelf-lives in 2006. According to Ukrainian military historian Mikhail Zhirokov, a Shturm-S battery attached to the 44th Artillery Brigade saw combat at dispersed firing locations during Ukraine’s ultimately doomed defensive battle at Debaltseve in 2015.

At Uglegorsk, a 9P149 was knocked out by tank fire, killing two of its three crew, and another abandoned. However, a 9P149 commanded by Aleksey Zemishenko (interviewed here) notched up five confirmed armor kills, including a separatist-operated T-64BV and T-72B tank, an MT-LB APC, and two Russian T-72s.

Afterwards, Ukraine refurbished dozens more 9P149s into service, incorporating batteries into battalions of MT-12 anti-tank guns of some of its separate artillery brigades. The Luche design bureau is also developing a modernized Sturm-SM variant with a laser-warning receiver and an enlarged version of the Barrier missile called the RK-2P Barrier-S, with a range extended to 4.35 miles and a new gyrostabilized OPSN-I targeting system with 20x magnification and automatic target lock-on capability.

Little imagery of Ukrainian Shturm-Ss has emerged in the 2022 Russo-Ukrainian war; but that’s not true of Russias modernized 9P149s, equipped with newer-generation 9M120 Ataka missiles. At least five have been confirmed destroyed or abandoned, and two more captured by Ukrainian forces.

#Ukraine: Two Russian BMP-2 IFVs were attacked by the Ukrainian army in the south of the country. Both vehicles were destroyed using RK-3 "Corsair" anti-tank guided missiles. pic.twitter.com/ZvuXDMk63Z

Sébastien Roblin writes on the technical, historical, and political aspects of international security and conflict for publications including The National Interest, NBC News, Forbes.com, War is Boring, and 19FortyFive, where he is Defense-in-Depth editor. He holds a Master’s degree from Georgetown University and served with the Peace Corps in China.  You can follow his articles on Twitter.