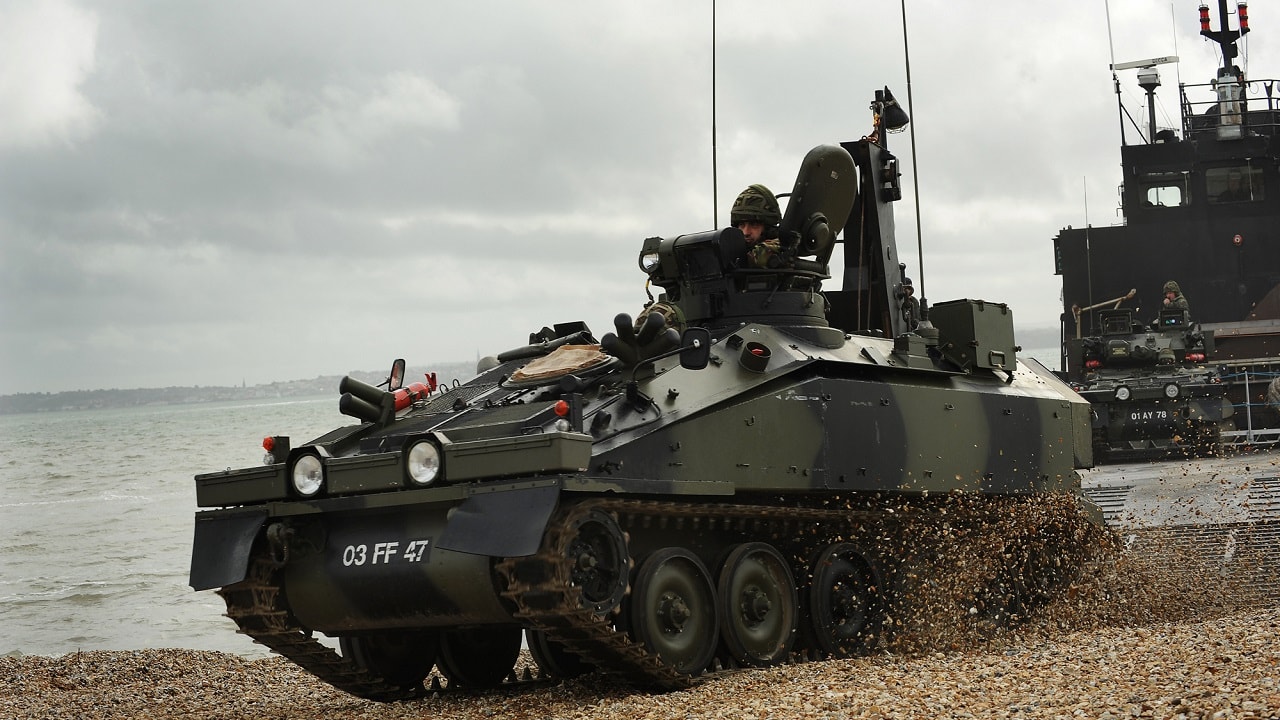 A Spartan Armoured Personnel Carrier hits the beach during an amphibious demonstration in Hampshire. Members from the 1st Mechanized Brigade were involved in the Maritime Component Power Demo held at Browndown Beach, Gosport on the 28th October 2010. The event took place in October 2010 for the ISCC (Immediate Staff Command Course) which involves Royal Marines coming a shore along with members from the Royal Welsh Regiment.

On April 8, British defense secretary Ben Wallace announced in a speech in Romania that the United Kingdom would deliver 120 armored vehicles to assist Ukraine in its struggle against the Russian invasion.

Wallace was referring to armored mine-resistant trucks the U.K. military had leftover from its years in Iraq and Afghanistan, used to minimize risks to life and limb from mines and IEDs. However, subsequent statements also revealed plans to send tracked armored vehicles.

Wheeled or tracked, such vehicles are useful to Ukraine as it shifts forces eastward to counter mounting Russian operations focusing on the Donbas region in Eastern Ukraine. Due to extensive Russian artillery surrounding Ukrainian troops in Eastern Ukraine, vehicles combining all-terrain mobility, carrying capacity, and meaningful armor are essential to reinforcing and resupplying frontline positions.

The British vehicles, however, will be new to Ukraine’s military which mostly uses Soviet or indigenous weapons. A “few hundred” Ukrainian operators will reportedly receive training in the UK to familiarize themselves with the new equipment.

That said, the total of 40 CVRTs, when combined with 80 protected mobility vehicles (see below), is more consistent with an initial statement the UK would send “120 armored vehicles.”

The 9-ton FV103 Spartan is a light armored personnel carrier with a capacity of 4-5 personnel plus 2 or 3 crew. It’s used to carry smaller recon, engineering and heavy weapons teams (mortars, portable air defense missiles etc.) and can attain a maximum speed of 60 miles per hour.

Spartans carry just medium machineguns for self-defense. However, Ukraine could attempt to install missiles on the Spartan as the UK did with its FV120 Spartan MCT anti-tank guided missile carrier.

The FV104 Samaritan is a high-roofed CVR(T)-based armored ambulance with room for four stretchers or six sitting wounded and smoke-grenade launchers for self-protection.

The FV106 Samson is a winch-equipped CVR(T) that can tow vehicles weighing up to 13 tons. It likely is intended for towing of other CVRTs, but it could potentially also aid recovery of Ukraine’s lighter armored vehicles, including BTRs, BMDs and BRDM-2s.

If the “40 CVRTs” pertains to additional vehicles besides Spartan, Samaritan and Samson, it may suggest British FV107 Scimitar reconnaissance vehicles, which are due for retirement by 2023.

The Scimitars have a crew of three and are armed with rapid-firing 30-millimeter Rarden cannons in addition to a 7.62-millimeter coaxial machine gun. The UK employed Scimitars successfully in combat in Iraq, Afghanistan and the Falklands War, and Latvia recently inducted 123 Scimitars into its armed forces.

The upgraded Scimitar II model uses the hull of the Spartan APC and integrates slat armor for defense against rocket propelled grenades, mine-resistant seating and ceramic armor, and an uprated engine to compensate for a major increase in weight to 13 tons.

In the context of Ukraine, these fast (max 50 mph) quasi-light tanks could effectively dispatch opposing light armored vehicles and suppress infantry, but would in turn be quite vulnerable to return fire of all kinds and depend heavily on mobility for survival.

These armored trucks were procured specifically to counter insurgent threats in Iraq and Afghanistan– particularly IEDs and mines.  They proved highly successful in preventing all but a few crew casualties to such weapons over many years of service. However, with those operations concluded, the British Army likely is happy to downsize that inventory.

Mastiff is a British variant of the 6×6 Force Protection Cougar Mine-Resistant Ambush Protected (MRAP). MRAPs are optimized for survivability of transported soldiers against to mines and Improved Explosive Devices (IEDs) through use of a V-shaped hull, shock-mounted seats and armor linings.

To protect against direct-fire ambushes, the Mastiff also has vertical armor plates inserted inside the hull, and slat armor girding it outside to trip incoming rocket-propelled grenades. The Mastiff’s turret can support medium or heavy machine guns, or automatic grenade launchers.

Besides troop carriers, Mastiffs come in battlefield ambulance, electronic warfare, communications, and explosive ordinance disposal subvariants—all of which could be useful to Kyiv. Ukraine already operated 20 Mastiffs, so there may at least some familiarity with the type.

The Wolfhound Heavy TSV is a Mastiff 3 derivative with the troop compartment replaced by a flatbed or cargo capsule. It’s usually dedicated to carrying supplies and demining equipment, or towing 105-millimeter howitzers.

Ukraine possesses large numbers of towed 100-millimeter MT-12 anti-tank guns, and Giatsint-B and Msta-B 152-millimeter towed artillery that could use a lift.

The Humvee-scale Husky Light TSV is a UK-tailored version of the Navistar MXT-MVA infantry mobility vehicle. The UK procured 351 Huskies to replace its Snatch Land Rovers, which had generated scandal due to high crew casualties in Iraq and Afghanistan.

Huskies can be outfitted with two levels of Israeli-built ceramic armor protection against small arms, mines and IEDs. The 7.65-ton vehicle can carry four personnel, and typically has a single turret-mounted medium or heavy machinegun for self-defense.

Most Huskies are utility models with a flatbed to carry supplies in the rear, but command post and ambulance variants exist too. In general, the Husky can carry cargos across difficult terrain inaccessible to heavier vehicles like the Wolfhound.

How Useful are Protected Mobility Vehicles in a war with Russia?

Vehicles like Mastiff are tailored for combating insurgents reliant on ambushes with mines, rocket-propelled grenades, mortars and machine guns—not so much mechanized adversaries like Russia with abundant heavy artillery, tanks, and long-distance anti-tank missiles.

However, such vehicles can usefully serve as “battle taxis” transporting infantry and specialists to the frontline at reduced risk to snipers, shrapnel from artillery and mines. Ideally, however, the infantry would dismount prior to entering battle. Wolfhounds and Huskies also represent a safer way to deploy valuable supplies and support specialists into dangerous combat zones.

Mastiffs and Huskies may also be suitable for rear-area escort and patrol missions guarding against attacks by special forces, airborne and saboteur/infiltrator groups. Russia employed such forces aggressively, if not very successfully in the early stages of its invasion.

Sébastien Roblin writes on the technical, historical, and political aspects of international security and conflict for publications including the The National Interest, NBC News, Forbes.com, War is Boring, and 19FortyFive, where he is Defense-in-Depth editor. He holds a Master’s degree from Georgetown University and served with the Peace Corps in China.  You can follow his articles on Twitter.