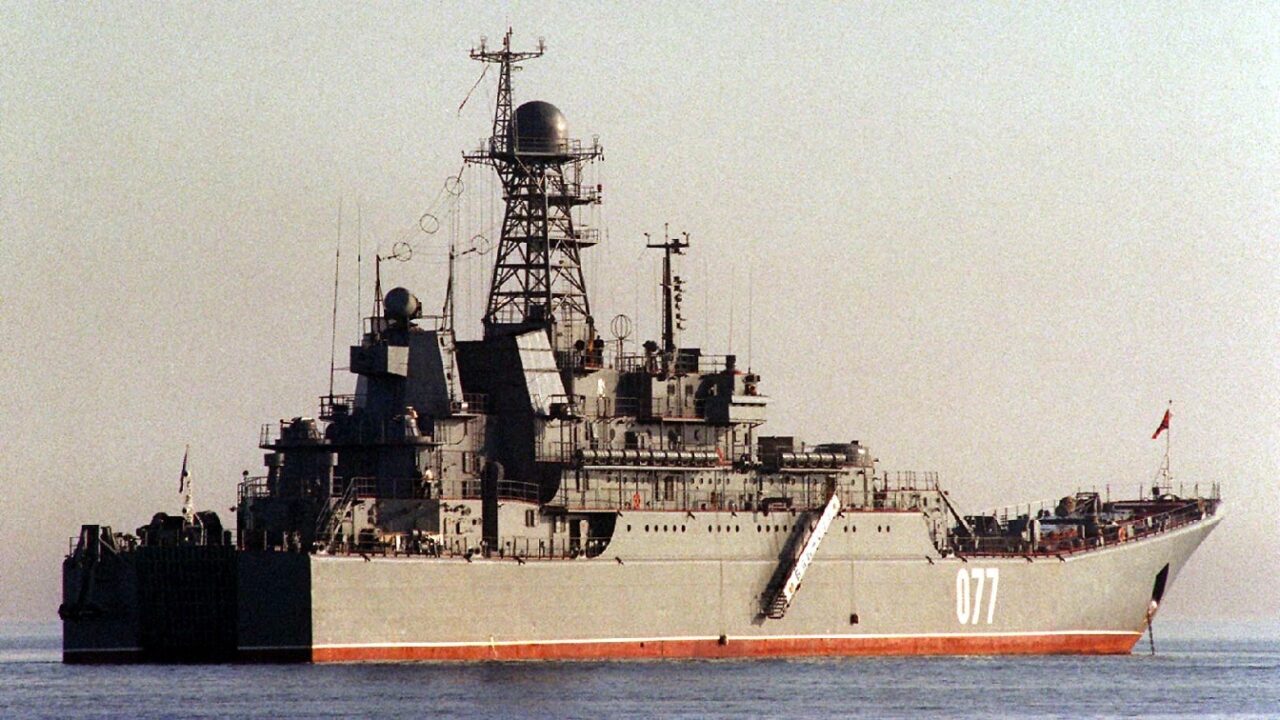 A Russian Federation Navy Ropuchhka II amphibious assault ship lies at anchor near Vladivostok, Russia, on Aug. 16, 1996, as the ship readies for Exercise Cooperation From the Sea '96. U.S. Navy and Marine Corps units of the 7th Fleet and Russian Federation Navy units are conducting the exercise near the port city of Vladivostok. The purpose of the exercise is to improve interoperability with Russian military forces in conducting disaster relief and humanitarian missions. Personnel exchanges and training will promote cooperation and understanding between the U.S. and Russian Federation Naval Forces. DoD photo by Petty Officer 2nd Class Jeffrey Viano, U.S. Navy.

Since before the beginning of the Russia-Ukraine War, the disposition of a squadron of Russian amphibious warships in the Black Sea has given the Ukrainians heartburn. Many wondered whether the Russians would attempt to exploit their control over the Black Sea to carry out an amphibious assault against Odesa, possibly in support of a land offensive from Kherson and Mikolaiv.

What Russia has found is what the United States has known for a while; an amphibious assault in a contested air and sea space is an extraordinarily iffy proposition.

Contrary to the worst expectations from before the war, the Russians have failed to decisively exploit their advantage at sea to win battles on land. This may mean that the long-held hope that amphibious assaults could throw an opponent off balance has yet to be rewarded, or it could mean that Russia simply didn’t have the equipment it needed to bring the fight from the sea.

So You Want to Assault Someone Amphibiously

A successful amphibious assault, or even the threat of one, can throw a defending army off-balance and unhinge its defense.

An attack in the flank can disrupt logistics and threaten an encirclement, forcing the defender to either squeeze out the landing with heavy losses or retreat.  The landings at Inchon, for example, forced the North Korean army into a precipitous retreat in the fall 1950.

However, historically successful amphibious assaults are rare and dangerous.  To undertake a modern amphibious assault the attacking force needs to accomplish several tactical and operational goals. These include achieving air superiority over the target, suppressing defensive positions with fires delivered from the air or sea, and safely deploying advance forces to the land in order to seize or neutralize defensive positions that could disrupt the main landing.

Surprise helps enormously with all of these, preventing the target from re-allocating ground and air forces to the zone of attack and reducing the effectiveness of tactical defenses at the point of the spear. Even during World War II surprise was often difficult to achieve because the demanding material requirements of an assault were evident to the defender.

Today, when open-source intelligence can indicate the movement of ships and aircraft and the activity of soldiers at loading docks, surprise can be nearly impossible to achieve with any degree of confidence.

Despite the complete absence of Ukrainian naval power in the Black Sea, Russia has had little luck employing its advantage to decisive effect. Prior to the war Russia very visibly transferred a number of older amphibious warships to the Black Sea from the Northern Fleet and the Baltic Fleet. The transfer of these ships was one of the readiest indicators that Russia was actually serious about invading Ukraine.

And yet the ships, including six Ropucha class tank landing ships and two amphibious docks, have had vanishingly little impact on the war. They have left port several times in order to menace the Ukrainian coast, but the apparent readiness of defenders has either deterred the Russians or left the fleet as an unbelievable bluff.

Indeed, one of the most humiliating events of the war thus far for Russia was the loss of one of their transports at dock in the city of Berdyansk, a loss which was captured on multiple video streams.

Still, Russia’s inability to successfully carry about amphibious ops in this war may have less to do with general trends and more with specific capabilities. The amphibious platforms that Russia transferred are all Cold War-era ships, small and with very specific mission capabilities. They were not designed to carry out independent amphibious assault operations; they cannot supply supporting fires and cannot offer much in the way of air support.

Things might have gone differently; eight years ago France broke an agreement with Russia to transfer two “Mistral” class amphibious assault ships, and to assist with the construction of two more ships in Russian yards. The presence of these vessels in the Black Sea would have given Russia a far more formidable amphibious capability, including a much more significant helicopter assault force.

The Age of the Amphib

Over the past thirty years, amphibious warships have come to dominate global naval procurement in the way that dreadnought battleships dominated a century before.

Much of this dominance came from the way in which amphibs met the needs of navies that otherwise struggled to win funding from their governments.  Amphibious warships were platforms of war, of course, but they could also have outsized diplomatic effect by supporting rescue, disaster relief, or general “presence” operations.

But at least the Americans have begun to rethink their commitment to amphibious platforms. As the strategic needs of the military shift from management of the commons to defeat of peer competitors, the utility of amphibious warships in “presence” and HADR operations seems to become less important. On the one hand, the Navy is working hard to increase the lethality of its large, flat decked amphibs by experimenting with different configurations of F-35B loadouts.

On the other, the Navy is expressing skepticism about the expansion of the San Antonio class LPD force, which is already at eleven and which could expand to twenty-six. These ships, while fabulously useful in a number of scenarios other than high intensity war, have somewhat less utility in context of defending Taiwan from China or other, similar engagements.

The Age of the Amphib probably isn’t over, but it likely will evolve based on the experience of the Russia-Ukraine War and the projected re-armament of Europe over the next few years.  Governments will have less need to justify naval expenditure through the humanitarian utility of amphibs.

At the same time, the inability of Russia to seize the amphibious initiative in the Black Sea may justify more interest in “serious” amphibs such as the Mistrals.