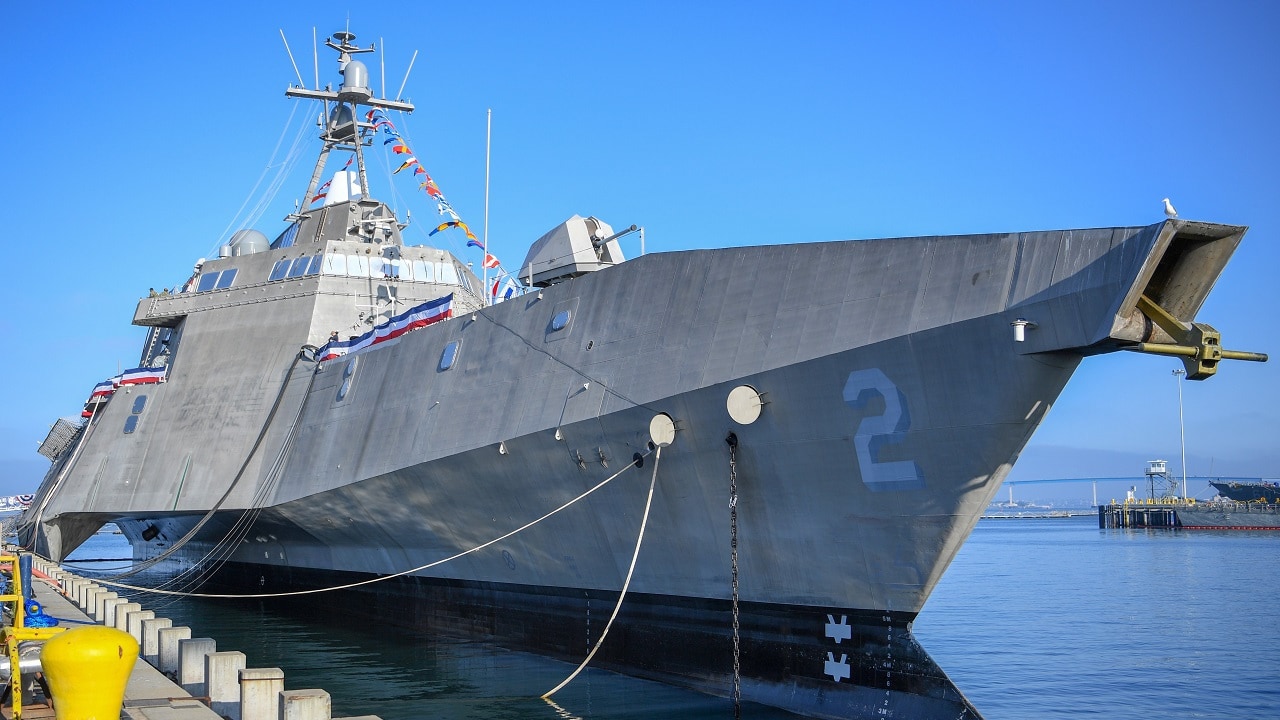 Can’t the Littoral Combat Ship Be Repurposed? Can the U.S. Navy leadership really not find a use for its flotilla of littoral combat ships (LCS) in an age of littoral combat? The navy’s fiscal 2023 budget submission proposes decommissioning nine youthful LCSs, justifying the move on the grounds that the leadership has decided to abandon the anti-submarine “mission module” that was supposed to be installed aboard these hulls. Instead, the forthcoming Constellation-class frigates will take on the sub-hunting function.

This is curious logic.

Retiring LCSs because their principal armament proved technologically unworkable would be like retiring brand-new Zumwalt-class guided-missile destroyers because their main battery, an advanced gun system, fires ammunition navy leaders rightly pronounced unaffordable. Yet they had the Zumwalts repurposed as shipkillers, eyeing them as platforms for launching hypersonic missiles alongside their complement of cruise missiles.

That makes sense. Once you have the platform, why not search out new ways to use it if its weaponry proves unsound?

In this case the quest should prove short, easy, and inexpensive. An alternative way to use the littoral combat ships already exists. Why not refit the vessels on the navy’s hatchet list for surface warfare and use them to augment the existing contingent of shipkilling LCSs? The surface-warfare mission module is evidently a mature technology, centered on long-ish-range Norwegian naval strike missiles and short-range Hellfire missiles.

Bolt anti-ship missiles onto erstwhile sub-hunting LCSs and send them to sea.

There’s a powerful rationale for keeping the full inventory of light surface combatants. Apart from the need for more hulls in the fleet—quantity has a quality all its own, after all—there are specific missions the LCS is well qualified to perform. Look at the South China Sea. China is trying to make the South China Sea into metropolitan Chinese territory in defiance of the law of the sea. It claims “indisputable sovereignty” over most of that waterway and thus the right to make the rules governing what foreign navies and coast guards may do there. Which means, not much.

Not military forces but the China Coast Guard and a maritime militia force embedded in the fishing fleet constitute the vanguard of Beijing’s “gray-zone” strategy. Coast-guard cutters and militia craft are imposing enough to intimidate fishermen or coastguardsmen plying their trade in the South China Sea. They can generally do so without gunfire—which is the point. Furthermore, China’s paramilitary fleet boasts a vast overmatch against Southeast Asian coast guards. And, backed by the People’s Liberation Army Navy, it can face down regional navies.

This is a good thing from Beijing’s vantage point. Sovereignty rests on a monopoly of physical force within national frontiers. China is approaching such a monopoly vis-à-vis its Southeast Asian neighbors. Over time, if left unopposed, its goal of indisputable sovereignty may become a reality in fact if not in law.

How to contest China’s bid for complete control? By being there to oppose Chinese aggression, and by being on scene in sufficient numbers and capability to outgun the China Coast Guard and maritime militia. U.S. maritime strategy in the South China Sea is a come-and-go affair. U.S. Navy or Coast Guard ships show up to make a legal demonstration on behalf of freedom of navigation, and then they steam away. Sometimes battle formations show up in the region, conduct exercises, and, again, vacate the scene.

That is no way to control geographic space.

Occasional maneuvers are all well and good, but look at the situation through the eyes of a Philippine or Vietnamese seafarer—the person you’re trying to embolden to do his or her job free of fear of Chinese bullying. Chinese mariners are on the scene more or less all the time to enforce Beijing’s claims, while their American opponents appear momentarily and sail away across the wine-dark sea. That leaves a domineering China holding the contested territory.

China is always there while America comes and goes. Would you take solace in such a flighty ally? I wouldn’t.

But a squadron of surface-warfare LCSs forward-deployed to Southeast Asia—preferably to the Philippine Islands, one of the chief targets for Chinese aggression and located close to disputed waters—could help firm up a strategy for pushing back. Such a flotilla would need to be numerous enough to allow a constant presence in regional seaways, preferably in the form of multi-ship wolfpacks. Nine hulls might make up such a squadron.

In other words, those nine hulls the navy wants to decommission could come in mighty handy. Apart from maintaining a steady presence, a forward-deployed LCS contingent would furnish Washington and its regional partners a desperately needed escalatory option. Chinese Communist Party poobahs strongly prefer not to swing the big stick of military force against fellow Asians; the small stick manifest in the coast guard and maritime militia is adequate unto Beijing’s purposes while avoiding the semblance of bullying.

This is its cudgel of choice.

But a missile-armed littoral combat ship outmuscles any coast-guard cutter. Send one or a few LCSs to stare down Chinese paramilitary forces, and you put China on the horns of a dilemma. It can escalate by dispatching the big stick, namely gray-hulled warships, and expose itself as an aggressor worthy of international opprobrium. Or it can deescalate, and see its sovereign claims degraded.

Either would be an improvement on current circumstances. The United States and its allies would be competing in earnest.

Wargames exploring gray-zone operations reveal several consistent themes and takeaways. Foremost among them: you have to be on station at hotspots to compete, and you need to expand, not narrow, your range of escalatory options short of using arms. It’s a bad thing if your only options are to stand idle, let fly with missiles or guns, or nuke a gray-zone antagonist. That’s basically the menu of unpalatable options for U.S. leaders at present. It’s doubly bad if that antagonist enjoys a multitude of escalatory options—as China does.

In this article:featured, LCS, Littoral Combat Ship, Navy, US Navy