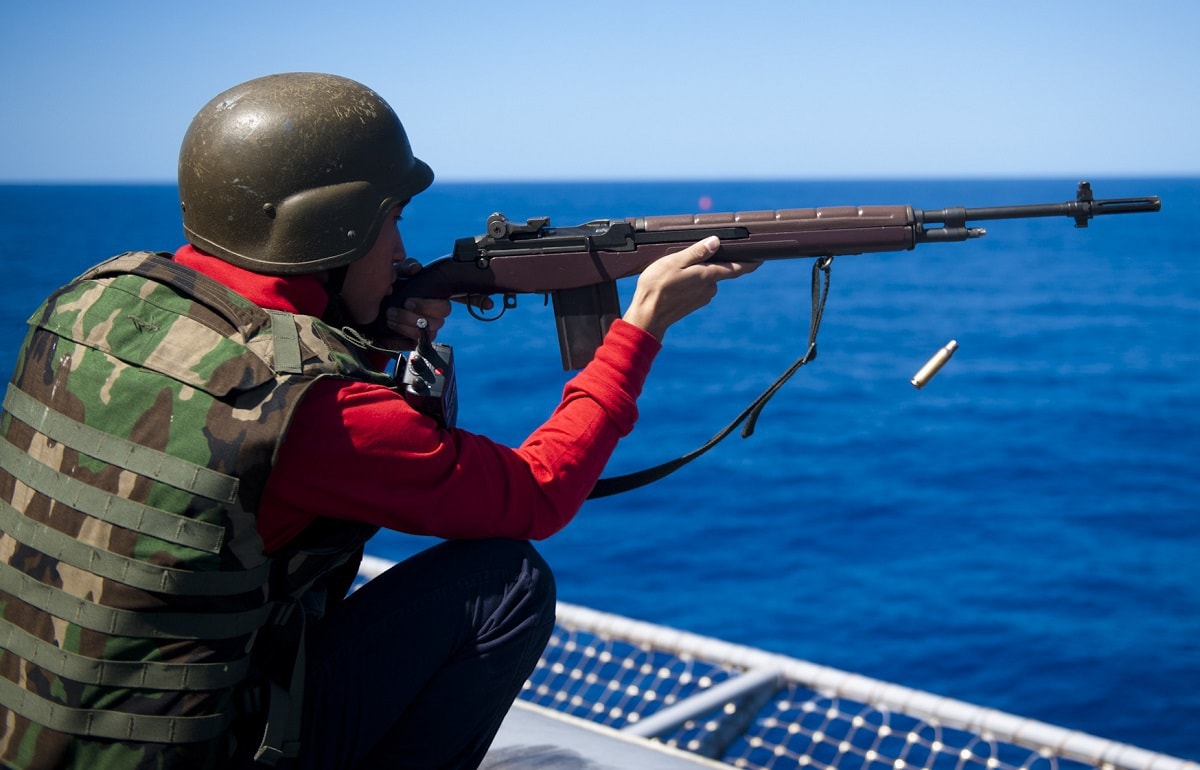 “I don’t want no teenage queen/ I just want my M14 … ” Military film buffs will instantly recognize those two lines as part of a running cadence from the boot camp sequence of Stanley Kubrick’s 1987 Vietnam War film classic Full Metal Jacket. The cadence is led by the hardcore U.S. Marine Corps Gunnery Sergeant Hartman, in turn, portrayed by the late great real-life GySgt R. Lee Ermey. Though R. Lee was actually medically retired as a Staff Sergeant in 1972 but received an honorary promotion to Gunny in 2002. Ironically, by the time the film’s protagonist, J.T. “Joker” Davis (portrayed by Matthew Modine), and his fellow surviving recruits arrive in Vietnam just in time for the 1968 Tet Offensive, their M14 battle rifles have been supplanted by the oh-so-controversial M16. In real life, though the U.S. Army and Marine alike indeed replaced the M14 with the M16 as the standard issue infantry rifle during the course of the Vietnam War, at least one elite U.S. military unit has retained the more powerful M14: the Navy SEALs.

Birth of a Battle Rifle

The M14 battle rifle needs no introduction for hardcore military history buffs and firearms enthusiasts, but for those who are new to the subject, at least a brief rundown is in order. The weapon is a magazine-fed, gas-operated semi-automatic 7.62x51mm NATO (.308 caliber) rifle, capable of both semiautomatic and full-auto fire, with a cyclic rate of fire of 700 – 750 rounds in the latter mode. Muzzle velocity is 2,800 feet per second, while the rifle has a maximum effective range of 500 yards and a maximum overall range of 3,275 yards. The overall length of the rifle is 44.14 inches with a barrel length of 22 inches. The weapon weighs 9.2 pounds empty and 10.7 lb with a fully loaded magazine.

The weapon was designed in 1954 and officially became the standard-issue rifle for the U.S. Armed Forces from 1959 to 1964, thus replacing the legendary M1 Garand. Over 1 million units were produced during that relatively brief span of time.

Though General George Patton famously referred to the M1 as “the greatest battle implement ever devised,” it did have one glaring weakness: the “M-1 ping,” i.e. the rifle would eject the empty stripper clip with a loud “ping!” which sent a pretty strong signal to enemy troops that the American GI’s weapon was empty. The M14, with its detachable 20-round box magazine, eliminated that problem. The firearm provided a 150 percent increase in ammunition capacity over the WWII-era weapon.

The M14 soon established a reputation for ruggedness and superb accuracy. Two perceived problems for infantry usage in the jungles of Vietnam were the heavy weight and lack of controllability during full-auto fire, especially compared to the M16, which could carry more rounds in a more lightweight and lower-recoiling platform.

However, for elite SpecOps units like the Navy SEALs, those aforementioned concerns aren’t as pressing, especially when you’re talking about specialized roles as opposed to conventional infantry usage. As noted by the NAVYSEALS.COM webpage:

“Navy SEALs started using modified M14s as sniper rifles as early as Vietnam. They have used them in Afghanistan and Iraq, primarily as designated marksman and sniper rifles. Navy SEALs keep the M14 in inventory due to its excellent accuracy, effectiveness at long range, and strong takedown capabilities of the 7.62mm round.”

However, just like the M16/AR-15/M4 series of rifles, the SEALs’ M14s have not remained frozen in time since 1964. This is most clearly demonstrated by the latest and greatest iteration of the rifle, the Mk 14 Mod 0 Enhanced Battle Rifle (EBR). As the American Special Ops website elaborates:

“The SEALs had been using the venerable M-14 for many years but needed a more compact and lightweight version. The result was the MK 14 Mod O Enhanced Battle Rifle. The EBR adds the following improvements to its M-14 core:

As the SEALs themselves would say, “HOOYAH!”