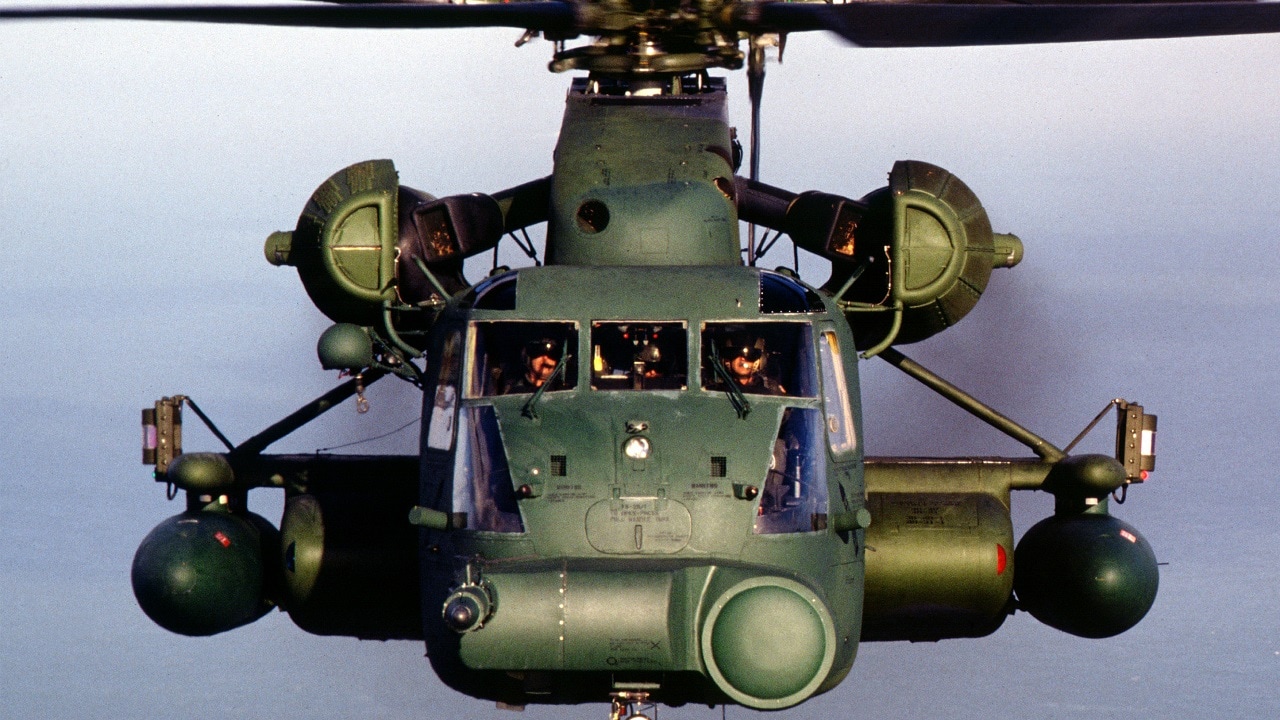 A front close-up view of an MH-53J helicopter of the 21st Special Operations Squadron, equipped with the new Pave Low infrared system for night operations, in-flight near the English coast.

“PJ, PJ, how’d you go?/Jolly Green, flying low.” Those two lines come from a running cadence for the U.S. Air Force Pararescue Jumpers (“PJs”), part of the elite USAF Special Tactics Teams (STTs) of Air Force Special Operations Command (AFSOC), which provides the U.S. Air Force’s counterparts to U.S. Army Special Forces (AKA “The Green Berets”), Navy SEALs, and Recon Marines. The “Jolly Green” referenced therein is not the Green Giant food company but rather the helicopter that served faithfully for so many years in transporting the PJs (and other SpecOps types) to the battlefield: the MH-53 Pave Low.

AFSOC’s Mission Statement and accompanying motto reads as follows: “Provide our Nation’s specialized airpower, capable across the spectrum of conflict … Any Place, Any Time, Anywhere.” As I’ve said before, whilst the AC-130 “Spectre” gunship is AFSOC’s primary tool for taking lives; up until her retirement in September 2008, the MH-53 Pave Low helicopter for AFSOC’s primary airframe for saving lives.

As noted by the National Museum of the United States Air Force info page, “The MH-53 helicopters were originally HH-53 ‘Super Jolly Green Giants’ used by the U.S. Air Force in the Southeast Asia War. Over the years, however, they received many upgrades and improvements. After the 1960s, they were completely re-skinned and had their engines and rotors replaced. Along with these improvements came a new designation, MH-53 (‘M’ for Multi-mission and ‘H’ for helicopter).”

All of these whirlybirds were built by Sikorsky Aircraft – now part of Lockheed Martin – one of the giants in the chopper-building industry since 1923, named after Russian-American aviation pioneer Igor Sikorsky.

Chief amongst the “improvements” with the MH-53 edition alluded to in the previous paragraph was the Pave Low program – hence the moniker — which modified the choppers for operating at night and/or during inclement weather; the enhancement package forward-looking infrared (FLIR) sensors, inertial global positioning systems (GPS), Doppler radar navigation systems, and terrain-following and terrain-avoidance radar. These features made it feasible MH-53 could fly clandestine, low-level missions 24/7 no matter the weather conditions.

The Pave Low carried a 6-person crew, consisting of a pilot, co-pilot, two flight engineers, and two enlisted aerial gunners. Fuselage length was 88 feet, height was 25 feet, and rotary diameter was 72 feet. The warbird had a max airspeed of 165 mph (at sea level), with a 16,000-foot ceiling and a maximum range of 690 miles, powered by two General Electric T64-GE-100 engines with 4,330 shaft hp per engine

A3 (Any Place, Any Time, Anywhere, Indeed)

The laundry list of the feats of derring-do performed by Pave Low crews: they led the way on the very first airstrike mission into Iraq during Operation Desert Storm in 1991 (and replicated the feat 12 years later during Operation Iraqi Freedom); rescued a downed USN F-14 Tomcat crew during that same conflict; led the successful rescue missions for both U.S. pilots shot down in Serbia in 1999; conducted the longest-ever helicopter rescues at sea in the North Atlantic in 1989 and 2002, and many a daring mission during the Global War on Terror (GWOT).

For a detailed description of a typical high-intensity Pave Low/AFSOC training mission, former Newsweek Pentagon correspondent Douglas C. Waller devotes an entire chapter to the subject in his 1995 book The Commandos: The Inside Story of America’s Secret Soldiers.

The MH-53 was replaced by the CV-22 Osprey tilt-rotor aircraft. At least nine Pave Lows have been preserved as museum static displays; besides the aforementioned National Museum of the U.S. Air Force, some other examples include the Hill Aerospace Museum at Hill AFB, Utah, and the Air Force Armament Museum at Eglin AFB, Florida.

Expert Author Biography: Christian D. Orr is a former Air Force Security Forces officer, Federal law enforcement officer, and private military contractor (with assignments worked in Iraq, the United Arab Emirates, Kosovo, Japan, Germany, and the Pentagon). Chris holds a B.A. in International Relations from the University of Southern California (USC) and an M.A. in Intelligence Studies (concentration in Terrorism Studies) from American Military University (AMU). He has also been published in The Daily Torch and The Journal of Intelligence and Cyber Security. Last but not least, he is a Companion of the Order of the Naval Order of the United States (NOUS). In his spare time, Chris enjoys shooting, dining out, cigars, Irish and British pubs, travel, USC Trojans college football, and Washington DC professional sports.