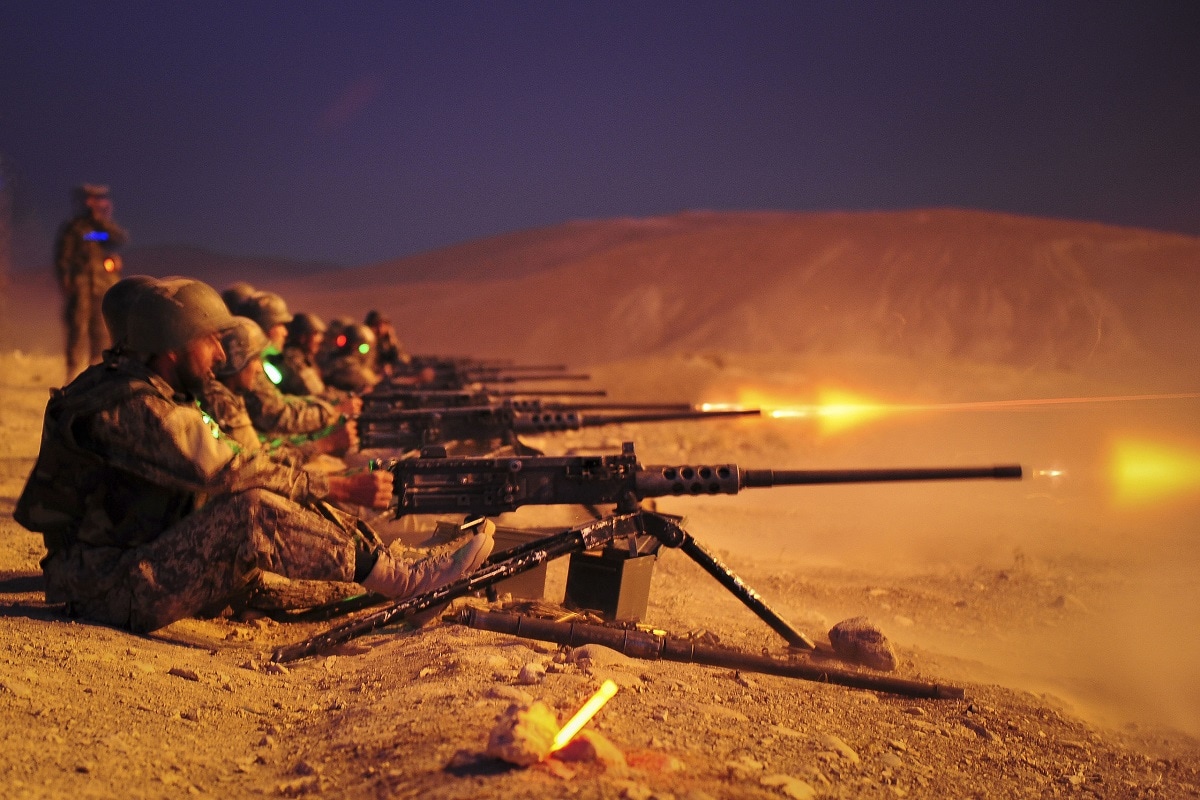 Why the Browning M2 Is Pure Legend: Something dawned on me the other day. For all the many references I’ve made to “Ma Deuce,” – the legendary Browning M2 .50 caliber machine gun – I have yet to pen a standalone article on it. Well, I certainly don’t want to disrespect this grand ol’ gal, so without further ado, let me make up for lost time.

The M2 .50 caliber machine gun is one of legendary gunmaker John Moses Browning’s three most enduring inventions, along with the M1911 .45 ACP and Browning P-35 Hi-Power 9mm semiautomatic pistols. Fittingly enough, the M2 is the second longest-lasting firearm in the U.S. Armed Forces arsenal, exceeded in longevity only by, well, the M1911.

The gun didn’t officially go into production under the M2 designation until 1933, seven years after Browning’s untimely passing. However, the gun and cartridge can actually trace its roots back to 1921 and the Browning M1921 .50 caliber machine gun.

The impetus for the weapon came from General John Pershing during World War I. Pershing recognized that his troops lacked a heavy machine gun and a cartridge suitable for use against Triple Alliance aircraft. The U.S. Army, having already established a solid working relationship with Browning, turned to him once more. Browning quickly scaled up his M1917 .30 caliber machine gun. True to form, it took him, Winchester, and Colt less than one year to develop the new cartridge and a complete working prototype.

The gun didn’t make it over to the muddy trenches of World War I in Europe. But it definitely made up for lost time in the European and Pacific Theatres of World War II. It then saw action in Korea, Vietnam, and every American conflict to follow, right up to the present day.

The gun has proven itself adaptable to use by ground troops, tanks, naval vessels, and aircraft – it was the go-to gun for our fighters and bombers alike in World War II. It proved effective against enemy infantry, lightly armored and unarmored vehicles, lightly fortified and unfortified buildings, and aircraft.

Regarding its use as an aircraft-vs-aircraft weapon in World War II, the late Martin Caidin, arguably the most prolific military aviation history author of all time, claimed in his book Black Thursday that the belly armor of the Luftwaffe’s Focke-Wulf FW 190 fighter was impervious to the .50 BMG round. I have yet to see this independently corroborated by any other source. (If any of our readers can provide a source, please let us know in the Comments section!)

In essence, the M2 is a belt-felt, air-cooled machine gun that fires from a closed bolt. Its standalone weight is 84 pounds, and that increases to 128 pounds when you add the tripod and the traverse & elevation mechanism). Its overall length is 65.1 inches, and its barrel length is 45 inches. The rate of fire is 600 rpm, with an effective range of 2,000 yards and a maximum range of 8,100 yards.

Now, one doesn’t normally think of a full-auto machine gun as a sniper’s weapon, but in the true spirit of the military mantra “Adapt, Improvise, Overcome,” the legendary U.S. Marine Corps sniper Gunnery Sgt. Carlos Hathcock – with 93 confirmed kills over the course of his USMC career – did just that with an M2 .50 cal in 1967. As described by U.S. Army Col. Michael Lee Lanning in his 1998 book Inside the Crosshairs: Snipers in Vietnam:

“Firing from a hillside position using an Unertl 8X scope on a .50-caliber machine gun stabilized by a sandbag-supported M3 tripod, Hathcock engaged a Vietcong pushing a weapon-laden bicycle at 2,500 yards. Hathcock’s first round disabled the bicycle, the second struck the enemy soldier in the chest.”

For 35 years, this stood as the record for longest sniper kill in history; this record stood until March 2002 when it was broken by Canadian Force Master Corporal Arron Perry.

I’ve only fired the semiautomatic version of the M2, but boy oh boy does it make for a fun-filled, memorable experience.

The experiences took place back in 2011 at the Burro Canyon Shooting Park in Azusa, Calif, thanks to my buddy Pulgas, whom I previously quoted in my article on the Barrett M82 .50 cal sniper rifle – that lucky SOB happens to own both weapons! I only fired two or three rounds in each session, as the .50 BMG ammo cost 7 bucks a pop – and mind you, this was long before the current inflation on the price of ammo. Neither I nor my shooting buddies were going for any sort of precision, just the thrill of firing the M2.

We fired our rounds into the side of a hill that conveniently occupied the far end of our reserved portion of the range. Two months later, the divots made by the bullets’ impacts were still clearly distinguishable. 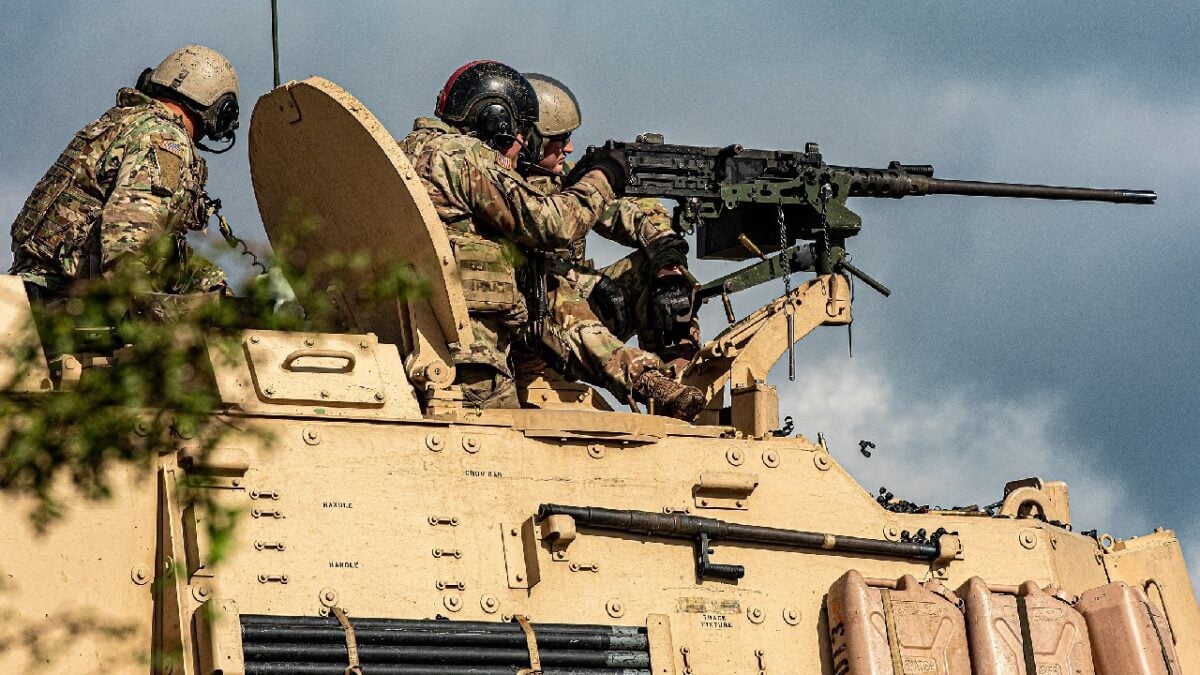 Here’s what Pulgas has to see about his experiences with the weapon: “Oorah! It’s heavy and expensive as f***! Haha. Hmm…would not be quite fair since I only own a semi. But it is fun…. The real deal M2HBs (transferable) can cost up to $50k in the civilian world but it’s probably one of the best crew served weapons around…I first encountered one during ‘familiarization’ training in 1988. To see that beast shred an armored personnel carrier at a thousand yards and the bright sparks shooting out of it generated by the API round (plus tracer) was a sight to behold.”

If you don’t have a spare $50,000 lying around but still want the M2 shooting experience, for a mere $299 you can do so at Battlefield Vegas.