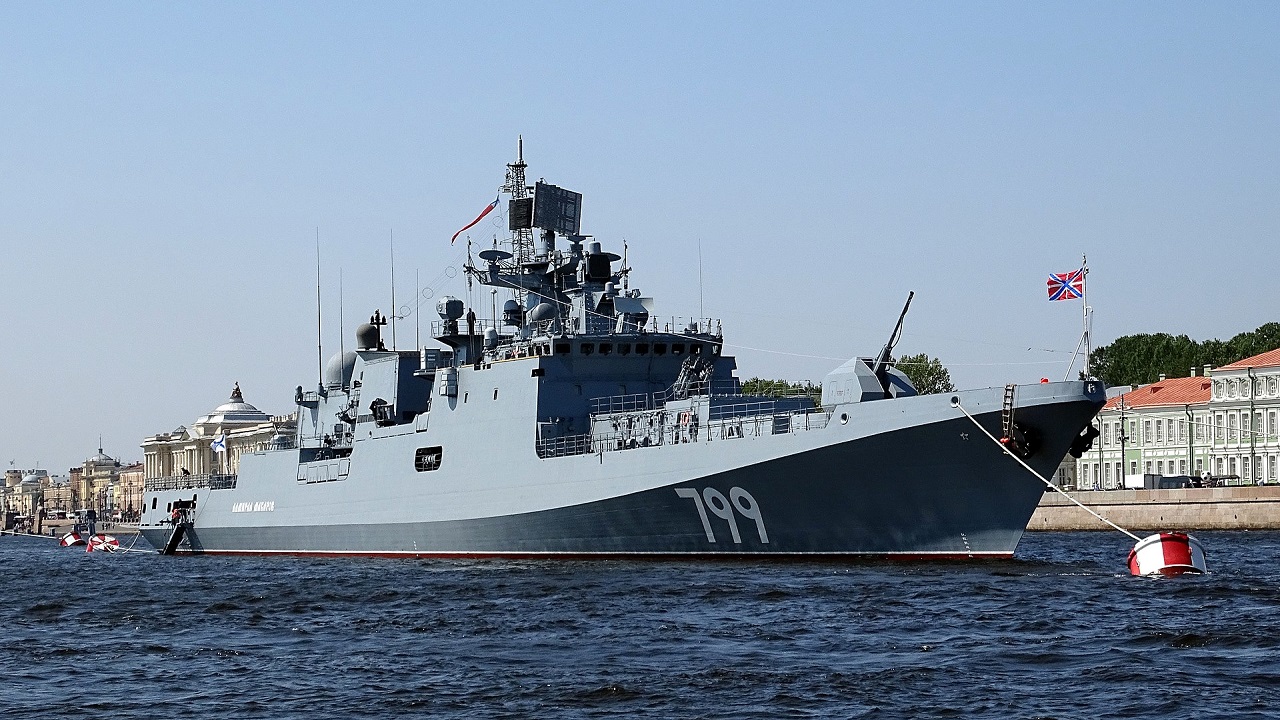 The frigate Admiral Makarov of the Russian Baltic Fleet anchored at Saint Petersburg.

Russia’s Admiral Makarov Frigate Destroyed by Ukraine? “Andrei … you’ve lost another submarine?!” Fans of the 1990 blockbuster action film The Hunt for Red October will recognize that as the line uttered by National Security Advisor Jeffrey Pelt (Richard Jordan) to Soviet Ambassador to the U.S. Andrei Lysenko (best known to American audiences as the dastardly Arjen Rudd in Lethal Weapon 2). Those who’ve actually read Tom Clancy’s bestselling first novel upon which the film’s screenplay was based may know that Mr. Clancy received the inspiration from the real-world November 1975 mutiny aboard a Soviet surface vessel, i.e. the frigate Storozhevoy. In other words, art imitating life. Well, if one were to take the converse approach of life imitating art and apply it to the current Russo-Ukraine conflict, the line would now read “You’ve lost another frigate, Vladimir?” (Yes, taking creative license here by daring to address Putin by his first name.) The first lost frigate being the flagship Moskva … and now the Admiral Makarov.

In case anybody’s wondering, the frigate was not named for the same person who was the namesake of the 9x18mm Makarov pistol (Pistolet Makarovka), that being Soviet arms designer Nikolay Fyodorovich Makarov. Rather, the warship was named for a Czarist-era Russian naval officer, Vice-Admiral Stepan Makarov, who was the designer of the world’s first icebreaker and was KIA in 1904 during the Russo-Japanese War.

The Admiral Makarov is (was?) a Project 11356 Admiral Grigorovich–class frigate, which was constructed at Yantar Shipyard, based in Kaliningrad. According to the Naval Technology website, “The vessels utilise the same design developed for the Indian Navy’s Talwar Class frigates … The Admiral Grigorovich Class frigates can be deployed in anti-surface warfare (AsuW), anti-submarine warfare (ASW) and anti-air warfare (AAW) missions. They are capable of conducting missions as a single vessel or as part of a task force … The Admiral Grigorovich Class incorporates a stealthy hull design developed by the Severnoye Design Bureau. The hull and superstructures were designed to have low radar, acoustic and infrared signatures. The frigate features a flight deck at aft to carry a Ka-28 or a Ka-31 helicopter.” The Makarov in particular had her keel laid in February 2012, was launched in September 2015, and commissioned in December 2017.

Initially, there were conflicting reports on whether the ship was sunk or merely damaged. The reliable information seems to come from a Yahoo! News report dated 30 October 2022:

“At least three ships of the Russian Black Sea Fleet, including the Admiral Makarov flagship, were damaged as a result of the unmanned surface vessel [USV] attack on 29 October … GeoConfirmed investigators have analysed footage from the unmanned surface vessels [USVs are speedboat-size vessels that can pack hundreds of pounds of explosives – ed.], which roamed the harbour and the sea near Sevastopol … The investigators released footage of an attack on an Admiral Grigorovich-class frigate. They concluded that the Admiral Makarov is the only one that matches this description in the Black Sea. The footage stops when the USV hits the vessel and explodes … GeoConfirmed believes that all the available footage indicates that between six and eight USVs were deployed in the attack, hitting at least three Russian vessels … GeoConfirmed said that Ukraine was operating the USVs.”

(NOTE: GeoConfirmed is described as “a volunteer-managed outlet mapping the war in Ukraine based on geolocations, on Twitter.”)

Not surprisingly, Russian propaganda machines are denying any such damage to the Makarov, which is very consistent with their knack for understating their losses throughout the conflict. Stay tuned, as it’ll probably be at least a few more days before the full and accurate story comes to light.