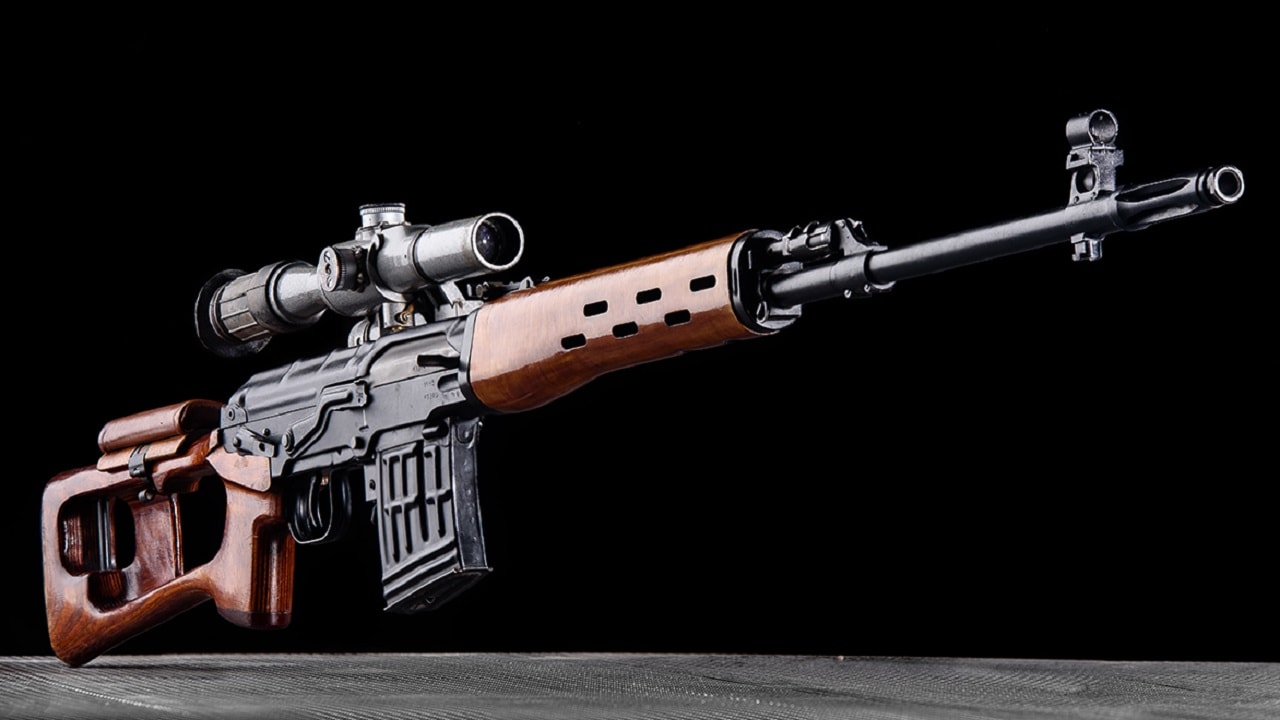 Dragunov: A History-Making Sniper Rifle? Vladimir Putin’s never-ending “special military operation” in Ukraine, in addition to serving as a proving ground for multiple new weapons systems on both sides of the conflict, has also given Soviet-designed Cold War-era weapons systems a new lease on life.

For example, as has been so heavily publicized, Russia’s T-72 and T-80 main battle tanks (MBTs) have endured such severe losses in their ill-advised Ukraine foray that Moscow, in an act of desperation, is bringing its T-62s out of semi-retirement.

This truism has also carried over to small arms such as sniper rifles. In spite of newer and fancier sniping weapons such as the Russian-made ORSIS T-5000 – evidently a personal favorite of controversial pro-Putin actor and martial artist Steven Seagal – and Ukraine’s homegrown 14.4mm (.57 caliber) XADO Snipex Alligator – which apparently has recently been used for plinking a Russkie solider from 1.7 miles away – there exists a venerable rifle that continues to plug away (morbid pun intended) after nearly 60 years: the Dragunov.

Semantics: The “Sniper Rifle” That Isn’t?

Before we get into the history and technical specifications of this weapon, let’s get some semantic nitpicks out of the way. The Dragunov rifle is officially known as the SVD, which stands for Snáyperskaya Vintóvka sistém’y Dragunóva obraz’tsá 1963 goda (Сна́йперская Винто́вка систе́мы Драгуно́ва образца́ 1963 года), which in turn literally translates to “Sniper Rifle, System of Dragunov, Model of the Year 1963.”

However, some firearms experts – dare I say “nitpickers?” – insist that the “Sniper Rifle” label is a technical misnomer in the case of the Dragunov. In a July 2021 article for SOFREP accordingly titled “The Dragunov – Don’t Call It A Sniper Rifle,” Travis Pike asserts the following:

“Calling the Dragunov a sniper rifle is generous. It’s nowhere near as accurate as a rifle designed for sniping needs to be. With high-quality ammunition, the Dragunov can score about 2 MOA. I imagine the Soviets weren’t issuing high-quality ammunition. While many label the Dragunov a sniper rifle, it was never intended to be. The Soviets called it a squad support weapon, and Americans would call it a designated marksman’s rifle … In many ways, the Soviets were ahead of the time with this idea. American forces didn’t become serious about DMs until the Global War on Terror. The Dragunov is designed to hit a man-sized target at 600 meters in infantry combat, with skilled shooters reaching out to 800 meters.”

For the benefit of any of our readers not familiar with the acronym “MOA,” it stands for “Minute of Angle,” or a 1-inch shot group at 100 yards. So then, 2 MOA translates into a 2-inch shot group at that same distance. For a basis of comparison, a typical basic commercial AR-15 can manage 1.5 MOA, and some highly customized editions of the AR platform can even manage sub-MOA groups. Meanwhile, a typical AK-47 can be expected to generate roughly 4 to 4.5 MOA.

From a contrarian semantic viewpoint, Eric Sof of Spec Ops Magazine titles his April 2022 article “SVD Dragunov: The most popular combat sniper rifle ever.” That aside, a rose – or rifle – by any other name …

The Dragunov SVD was named for its designer, Yevgeny Fyodorovich Dragunov, who developed the weapon between 1958 and 1963. Tovarish (“Comrade”) Dragunov was rewarded for his efforts in the latter year when the Red Army officially adopted the weapon. In the process, a new historical milestone was achieved, as the SVD became the first-ever semi-automatic rifle to be selected for sniping purposes, at a time when all other armies thought that semi-automatics were not sufficiently accurate for this role; for example, during the Vietnam War era, the U.S. Army and Marine Corps snipers were using the bolt action Winchester Model 70 and Remington Model 700 (though some years later, the U.S. Navy SEALs eventually did press the semiauto M14 into service as a sniping weapon). The rifle employs a gas-operated rotating bolt.

One carryover the Dragunov did retain from the bolt-action era was the powerful 7.62x54mmR cartridge, which had been used to devastating effect in the Mosin-Nagant rifle by Red Army snipers such as Vasily Zaitsev and Lyudmila Pavlichenko during the so-called “Great Patriotic War,” and during the Winter War of 1939 by Finland’s Simo Häyhä, the highest-scoring sniper of all-time.

A basic Dragunov SVD has a barrel length of 24.4 inches, an overall length of 48.2 inches, and a weight of 9.48 pounds with a scope and empty magazine. Typical magazine capacity for the Dragunov SVD is 10 rounds.

Used In Many Conflicts

Besides the Red Army, the weapon was adopted by the other armies of the Warsaw Pact and copied by Chinese, Egyptian, Iraqi and Yugoslavian makers. Accordingly, the SVD has seen use in at least 27 different conflicts, starting with the Vietnam War, then moving onto the Sino-Vietnamese War, the Soviet-Afghan War … all the way up to the current Ukraine conflict, thus establishing a solid reputation for deadly efficacy. As noted by my 19FortyFive colleague Peter Suciu back in January 2021, “In early 2020 the Russian military received the most updated version, which could make the weapon even deadlier in the right (or more accurately wrong) hands.” Many a dead Russian and Ukrainian soldier alike could attest to the prescience of Peter’s statement.

Want to Fire the Dragunov?

If you want to experience firing this historic rifle but don’t want to cough up the proverbial arm and leg to actually purchase one, for a measly $35.00 USD you can rent one and get five rounds of ammo to blast downrange courtesy of Battlefield Vegas in good ol’ “Sin City,” i.e. Las Vegas, Nevada.