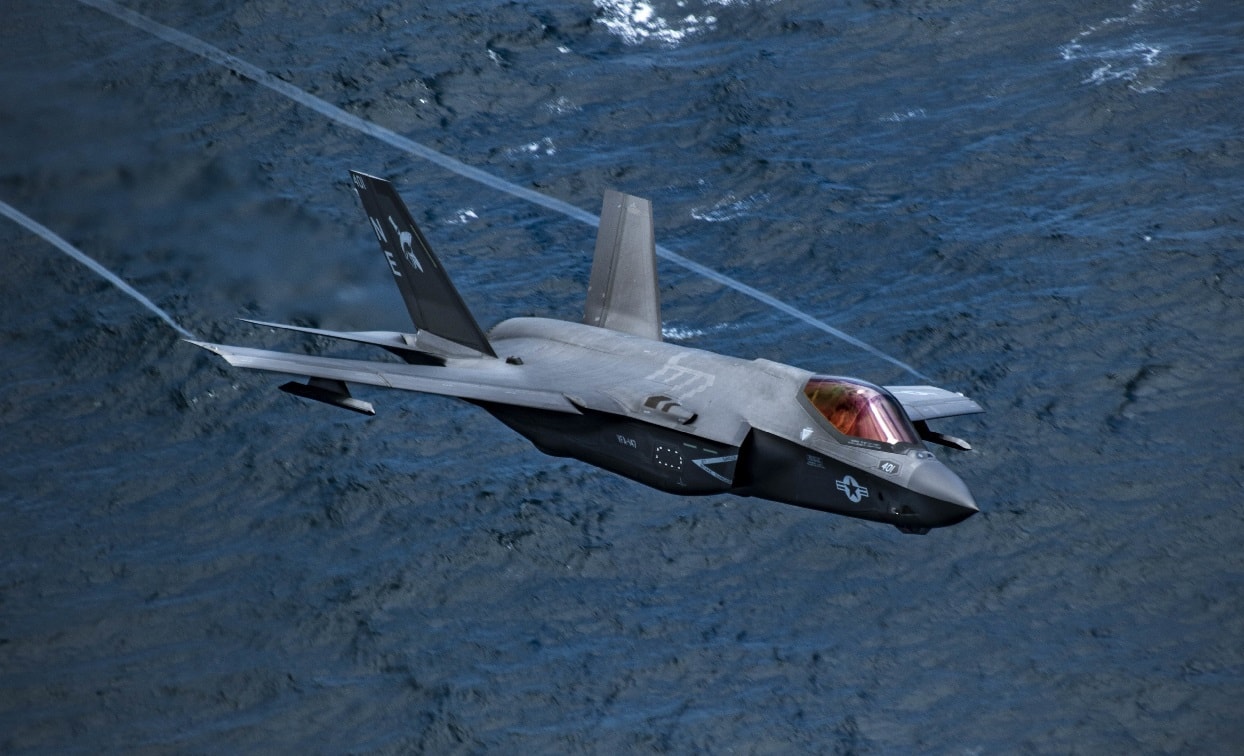 Image of F-35 at sea. Image Credit: US Navy Flickr.

The US Navy vs. China’s PLAN: Who Wins a War At Sea? A few months back over at Bloomberg retired Admiral Jim Stavridis presents his take on the growth of China’s People’s Liberation Army Navy and projects how a maritime war might play out:

“I see four distinct maritime ‘flashpoint’ zones, where the Chinese navy may potentially take military action against the U.S. and its allies, partners and friends. They are the Taiwan Strait; Japan and the East China Sea; the South China Sea; and more distant waters around China’s other neighbors, including Indonesia, Singapore, Australia and India.”

This suggests an approach to U.S. and allied strategy vis-à-vis China for times of strife. U.S. commanders and officialdom should look to the basics of strategy, concentrating in particular on the principle of concentration. Strategic grandmasters from Carl von Clausewitz to Alfred Thayer Mahan affirm that at its most fundamental, strategy is about amassing more firepower than the adversary at the scene of battle at the time of battle. Straightforward, isn’t it? Whoever’s stronger where it matters, when it matters, wins.

This oversimplifies a trifle. More firepower furnishes no ironclad guarantee of victory. In fact, there are no such guarantees. But it does bias the odds toward the better-armed gunslinger.

And yet Clausewitz points out that while everything in warfare is simple, accomplishing the simplest thing is difficult. In part that’s because of the climate of warfare, an endeavor rife with chance, dark passions, and Murphy’s Law. In part, it’s because the antagonist gets a say in how the endeavor unfolds and will do its darnedest to make sure it is stronger at the decisive place and time. The U.S. military and its regional allies should act on that logic, making themselves the ornerier contender rather than passively awaiting what the PLA Navy and the landbound air and rocket forces that back up the fleet choose to do off Taiwan, in the East or South China Sea, or elsewhere on the Indo-Pacific map.

Some principles that should govern war planning in the Western Pacific or the Indian Ocean include:

Sometimes you get the sense that we in the West are nervously wondering what big, bad China will do with all that fancy hardware it has accumulated in recent decades and when it will do it. A more proactive posture will keep China’s leadership wondering what Washington, Tokyo, and other regional contenders have up their sleeve. As retired general and secretary of defense Jim Mattis once put it, it’s better to keep others up nights than let them keep you up nights.

Do not withdraw from the Western Pacific under assault:

An absentee combatant stands little chance of prevailing. The U.S. Marine Corps has been way out in front on implementing this principle in recent years, fashioning the idea that “stand-in forces” will remain in the region even during a PLA onslaught, and will do their best to make things tough on China until forces from outside can make their way into the combat zone, combine with stand-in forces, and win. They will protract the war in hopes of making Father Time their ally in the struggle. Stand-in forces are troublemakers. They should conduct themselves as stubbornly as possible.

Geography is a foe to China, fettering its nautical destiny. Beijing has to fret about gaining access to the Western Pacific high seas and waters beyond from the moment a warship or merchantman casts off lines in a Chinese seaport until the time it moors in a foreign port of call. China’s misery is America’s opportunity. The United States and its allies can deliberately compound China’s access dilemma by deploying along the first island chain and barring its access to the high seas through the straits that puncture the island chain. The more PLA commanders have to worry about marine access, the more they will disperse forces along the island chain—and the less firepower they will have to concentrate at any individual flashpoint cataloged by Admiral Stavridis.

A back-to-basics approach offers the allies their best chance of massing more combat power for a contingency than can China’s armed forces. Look to the masters of strategy for wisdom—and execute.

James Holmes is J. C. Wylie Chair of Maritime Strategy at the Naval War College and a Contributing Editor for this publication. The views voiced here are his alone.