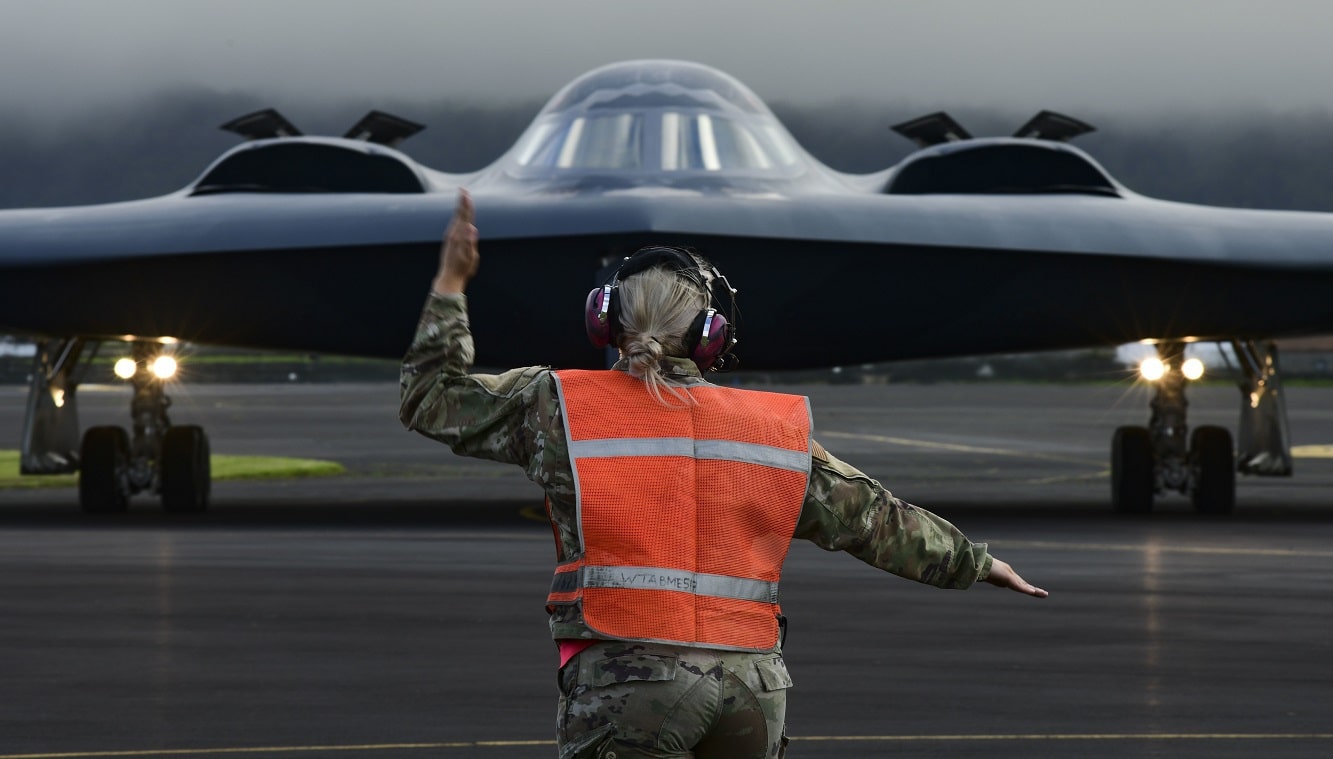 Crew chiefs assigned to the 393rd Expeditionary Bomb Squadron, prep a B-2 Spirit stealth bomber for take off, at Lajes Field, Azores, March 16, 2021. Three B-2s, assigned to Whiteman Air Force Base, Missouri, arrived at Lajes to hot-pit refuel prior to supporting several bomber task force missions in the high north. Strategic bomber missions are conducted periodically to enhance the readiness necessary to respond to challenges, in coordination with partner and allied nations, around the world. Members assigned to U.S. European Command regularly train, fight and live with allies and partners from bases in Europe, to ensure timely and coordinated responses when needed. (U.S. Air Force photo by Tech. Sgt. Heather Salazar)

New B-21 Stealth Bomber Will Be a Handful for U.S. Adversaries: If you are an American air war planner or strategist, you’re thinking, it’s about time. The U.S. Air Force bomber fleet, comprised of the B-52, B-1, and B-2, has not been updated with a new model in more than 30 years. Now the B-21 Raider, the Air Force’s newest prize, will finally be displayed next year, with the maiden test flight scheduled later in 2022. Although not fully ready for at least five years, the B-21 has numerous future advantages in a potential conflict with China or Russia.

We Will See More of the B-21 Next Year

The B-21 Raider is highly-stealthy and nuclear-capable. So far, only artist concept renderings of the new bomber have been released to the public. Air Force leadership said there will be an official ceremony showing off the Raider next year. We haven’t seen a new bomber enter the fleet since 1988 when the B-2 Spirit burst onto the scene with its first flight in 1989.

Five of the B-21s are reportedly being built at Air Force Plant 42 in California. Northrop Grumman has been working on the Long-Range Strike Bomber program since 2015. The new bomber will fully enter service by 2026 or 2027. The B-21 will be a flying wing design similar to the B-2.

The B-21 comes with a high price tag. If the Air Force gets 100 bombers in the next 30 years, it will cost over $203 billion with an average unit cost of $639 million in 2019 dollars. But the Air Force wants as many as 258 B-21s for use in a potential war with China or Russia. The more B-21s are produced, the greater the chance of the B-1B Lancer and its B-2A Spirit fleet will be retired. Then the savings from those airplane’s operational costs and maintenance can be transferred to funding the B-21. The current bomber force numbers 158 airplanes as of 2018. They have an average age of 42 years.

Multi-Role Bomber Can Carry a Mix of Munitions

The Air Force said the B-21 will have “a broad mix of stand-off and direct-attack munitions.” The B-21 will also be capable of flying missions with unmanned aircraft, further cementing its role as a “head coach” for integrating drones for various mission profiles.

There are many potential use cases for the new bomber. One would be flying through contested air space and eliminating Chinese command and control centers, radar installations, and surface-to-air missiles. That would be an initial phase of a larger aerial attack.

The B-21 could also assist the navy in destroying anti-ship missiles. In addition, the B-21 could take out Chinese military installations on various rocks and reefs in the East and South China Seas. A nuclear-capable B-21 squadron could also be deployed on Guam for a show of force against China. This modernization of the nuclear triad could deter Beijing from a first strike or second-strike nuclear exchange.

For a Russian wartime scenario, B-21s could target advanced anti-aircraft systems such as the S-400 and S-500. These are considered threats to the Air Force. For example, the S-500 can hit targets 300 miles away and has a good chance of killing non-stealthy aircraft.

B-21: Keep It As Secret As Possible

For these reasons, the Air Force and Northrop Grumman will continue to be secretive and hold details of the new bomber close. The public may only get a glimpse of the B-21 technology demonstrator for a photo opportunity and the media may simply be notified when it makes its first flight later in 2022.

This means that operational secrecy for the B-21 program will be heightened. The plans of the new bomber would be a paramount target for spies. Thwarting conventional espionage or cyber espionage efforts from the Russians and Chinese to steal plans will be a significant job for U.S. counter-intelligence.

Congress Is On Board for Now

Besides the obvious military dimensions, one reason Congress may support the new B-21 program over the long term is job creation. Northrop Grumman is partnering with Pratt & Whitney, Janicki Industries, Collins Aerospace, GKN Aerospace, BAE Systems, and Spirit Aerosystems. These are all potential economic development engines for the defense industrial base – something Members of Congress will tout to their constituents.

This job creation feature and set of advanced capabilities will likely make the B-21 program popular despite the high cost – provided the acquisition cycle does not have delays or cost overruns. If it can conduct a test flight next year, this will achieve an important milestone and signal to Congress that the airplane is on-track. 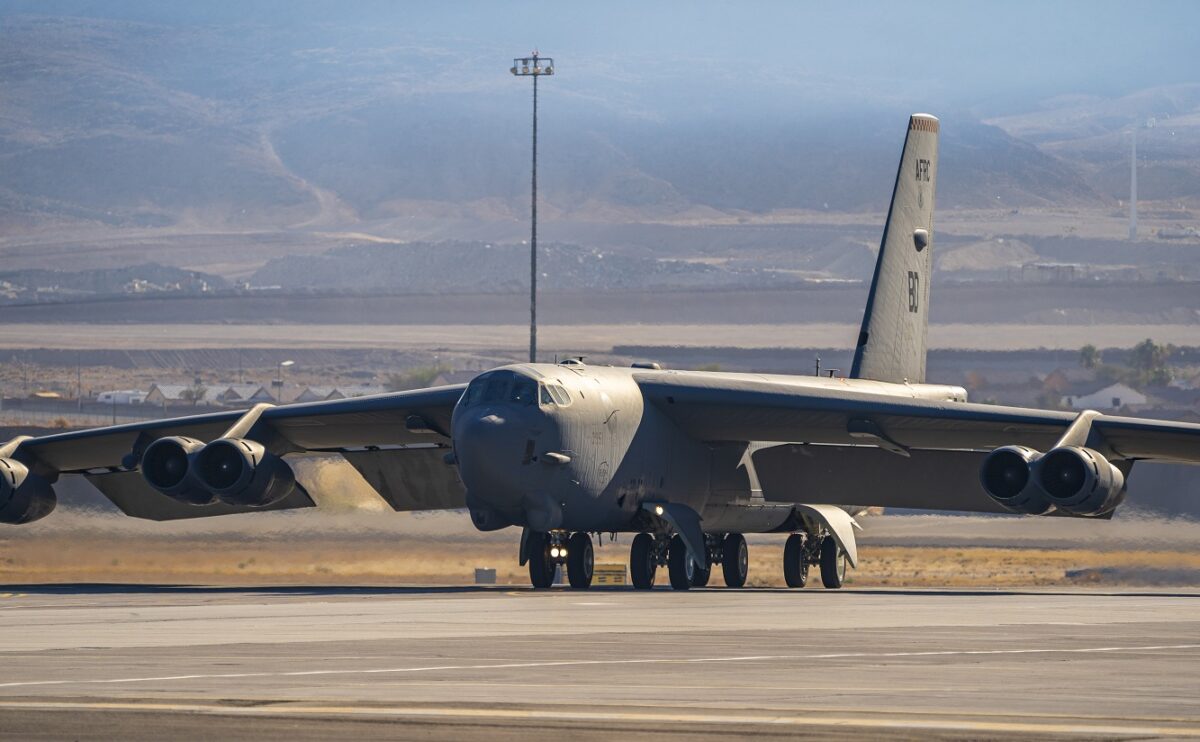