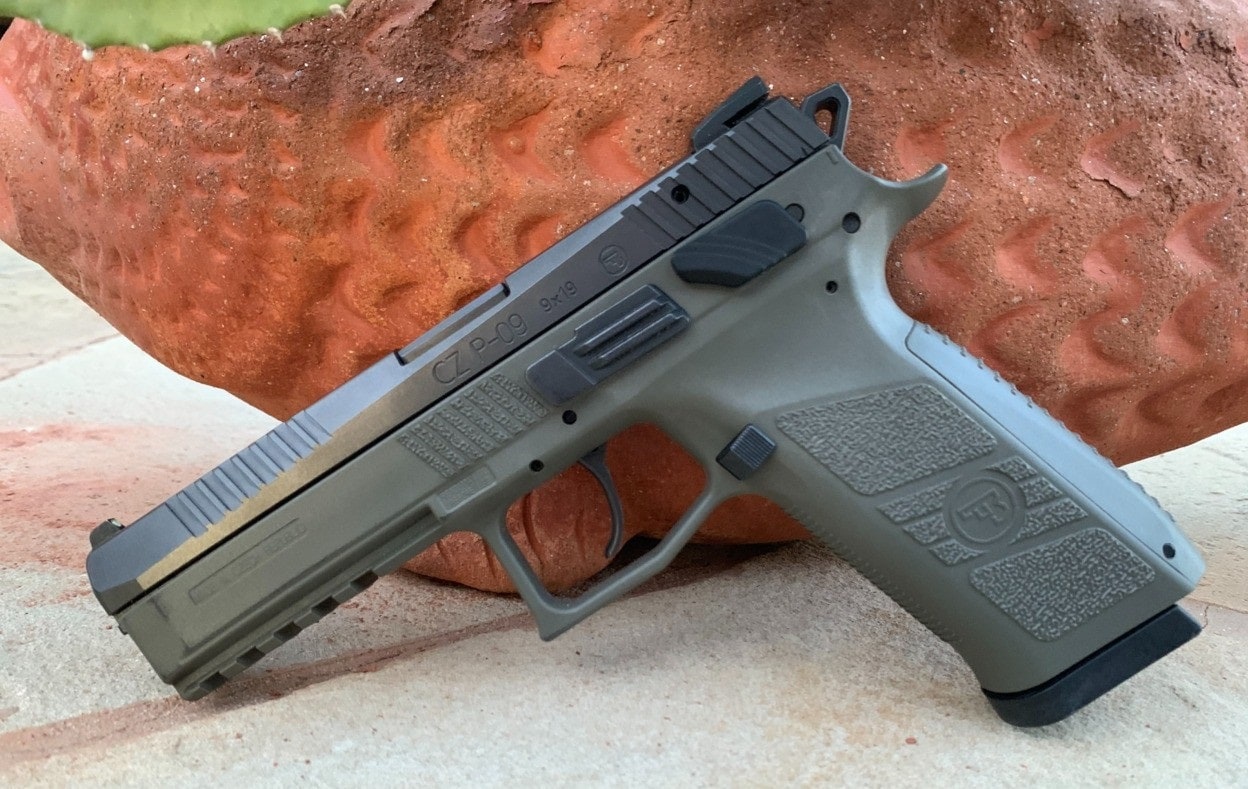 It looks good and feels good to many handlers, but the CZ P-09 handgun eventually dropped out of the U.S. military’s XM17 Modular Handgun System competition to replace the Beretta M9. The CZ P-09 and the more compact P-07 are Czech-made. That wasn’t the problem. The final decision to scratch the trials had to do with the pistol’s double-action-only (DAO) trigger and its lack of a modular frame. The DAO was not a requirement for the U.S. Army proposal, but modular was a requirement. CZ likely thought that the DAO feature would not sit well with the evaluators, and it decided not to go forward in the trials.

No newcomer to the tactical market, CZ (Ceska Zbrojovka) has been in business for 85 years and CZ-USA, its domestic distributor, has been in Kansas City, Kansas for 24 years. So why did this gun not get very far in the XM17 competition?

The CZ P-09 brings a lot to the table with its 9 X 19mm or 9mm caliber. It has a fiberglass-reinforced polymer frame with steel slides. Three different backstraps can be changed out to better fit a shooter’s hand. The P-09 has night sights. It comes in 19-round or 21-round magazines. Reloading can be quick due to the funnel-shaped magazine well-mouth.

The P-09 also has an ambidextrous de-cocker safety. It has the Picatinny rail for accessories, plus it is suppressor-ready. The controls are large and simple to use. Some reviewers say it has “minimal muzzle rise and soft recoil.”

Is It Too Big?

It’s a large sidearm. It’s bigger than the Glock 34 and the Sig Sauer P320 Legion. The overall length of the handgun is 8.1-inches and the barrel is 4.54-inches. It weighs 31 ounces unloaded.

It’s the Standard with Police in Central and Eastern Europe

The CZ P-09 and P-07 is popular with the Hungarian national police which used those models to replace its entire inventory of pistols in 2020. The CZ P-01 has been in service with the Czech National Police since 2001.

Critics have complained that the early CZ 75 pistols’ texturing is not up to par and can feel slick. Some users felt that critique was fixed with the P-09 model.

Despite all the favorable reception from users and reviewers, CZ for whatever reason got scared away from the XM17 competition. Maybe they lacked confidence in the requirements in the original request for proposals. The double action only feature, in which the trigger both cocks and releases the hammer, could have made it difficult to win. The DAO could have led to more accidental discharges depending on how well service members would be trained on the weapon. When you are thinking about purchasing hundreds of thousands of firearms, safety is paramount and the gun needs to be foolproof.

So, ultimately CZ dropped out and the winner of the competition went to the Sig Sauer M17 and M18 based on the gun maker’s P320 model. CZ, to its credit, will likely continue to be the go-to service pistol for some European police forces. Over the long run, even though CZ dropped out, its reputation has grown stronger over the last few years, a clear win for sure.