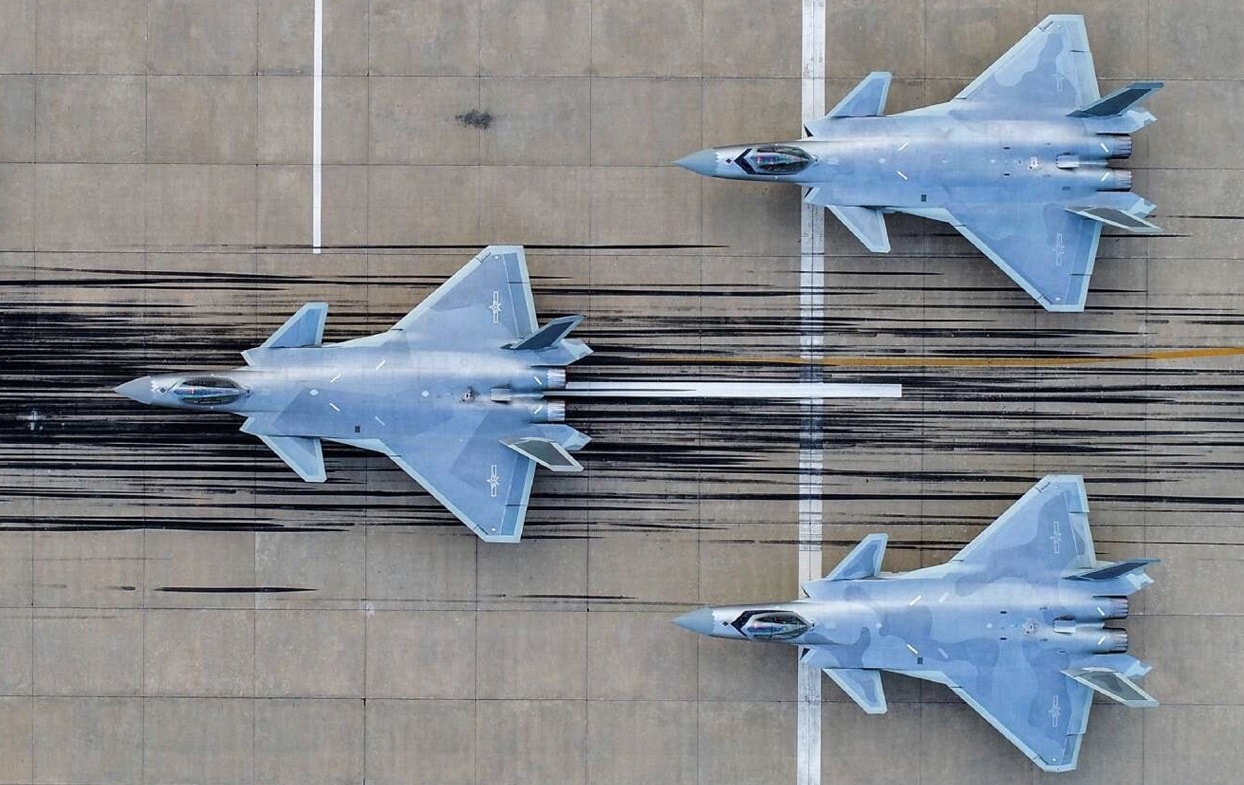 China’s Air Force Keep Flexing Its Muscles: Thirty-nine Chinese military aircraft flew into Taiwan’s air-defense identification zone on Sunday. It was the most in a single sortie since October.

China’s near-daily flights into the ADIZ — which Taiwan monitors but isn’t territorial airspace — are often conducted by fighter jets and special-mission aircraft. The January 23 sortie was the first since December 10 and the fifth since October 4 to include an H-6 bomber, according to records kept by Taiwan’s Ministry of Defense.

China’s bomber flights around the first island chain, which includes Japan, Taiwan, and the Philippines, are relatively new and reflect how the Chinese military has rapidly grown in size and capability.

When US Air Force Chief of Staff Gen. Charles Q. Brown assumed his previous job as commander of Pacific Air Forces in July 2018, the advancement of China’s bomber fleet over the preceding five years was highlighted in an early briefing by his staff.

The emphasis on long-range bomber flights emerged in the mid-2010s. In April 2014, Chinese President Xi Jinping endorsed the air force’s vision for strategic operations, and a year later, an H-6K flew through the Bashi Channel between the Philippines and Taiwan for the first time. A few months later, bombers flew through the Miyako Strait between Japanese islands north of Taiwan, according to a Rand Corporation report.

Those flights have only increased. In late 2016, Chinese leaders directed the air force to begin flights around Taiwan, which has important military bases on its east coast.

In 2017, the new head of China’s air force said the service’s strategic mission required it to be able “to project power and make strikes over long distances” and that exercises over “open seas will become a regular part of training.”

In 2018, H-6 bombers deployed to a Chinese outpost in the South China Sea for the first time, landing at Beijing’s largest base in the Paracel Islands.

The H-6 is based on the Soviet Tu-16 bomber, which China received a license to produce in the late 1950s. The bomber has been continuously upgraded since then, but it has developed rapidly in recent years.

“A decade or two ago, I think we all would have had a good laugh about China’s bomber force,” said Lyle Goldstein, director of Asia engagement at Defense Priorities and an expert on the Chinese military. “In the early 2000s, they repurposed the whole thing and kitted it out with all the new fancy electronics.”

“The important thing is they gave it a whole new class of weaponry that looked really fearsome,” Goldstein added, pointing to the YJ-12, considered China’s most powerful anti-ship cruise missile.

The H-6K entered service with China’s air force around 2010. According to the Pentagon’s 2021 report on China’s military, the H-6K “features more-efficient turbofan engines” for an extended range of more than 2,200 miles.

The H-6K can carry six land-attack cruise missiles, giving it “a long-range standoff precision strike capability” with which it could reach targets in the second island chain, including Guam, according to the Pentagon report.

“They effectively have constructed their own B-52 — that is, an old-style bomber that does just fine for launching all kinds of nasty munitions,” Goldstein said.

The H-6K had a number of other upgrades — including better engines and airframe, enhanced avionics, and improved sensors — that allow it to carry larger payloads and fly farther. Two subvariants with additional modifications have also entered service in recent years.

The H-6J is a maritime strike version with six external pylons that can carry YJ-12s, allowing it to “attack warships out to the Second Island Chain” and “significantly extending” the reach of Chinese naval aviation, the Pentagon said. China has also publicized H-6J drills involving conventional bombing and mine-laying.

China’s air force introduced the H-6N in 2019. With an aerial-refueling capability and the ability to carry air-launched ballistic missiles, it is “optimized for long-range strikes” and can serve as the aerial component of China’s “nascent nuclear triad,” according to the Pentagon report.

China’s long-range bomber flights serve both domestic and foreign policy goals by demonstrating military prowess at home and abroad and by providing real-world training for air crews. Flights around Taiwan also appear to be an effort to pressure that island’s government, according to the Rand report.

China’s bomber operations have also been an area for cooperation with Russia. Their bombers have twice carried out joint flights between South Korea and Japan, allowing them to conduct complex training and send a message to mutual foes.

‘They’ve got the resources’

That bomber capability is still relatively new, as are the assets being developing to support it, such as dedicated tanker aircraft. That capability might take another decade to mature, but it shouldn’t be counted out in a conflict, Goldstein said.

“I think in a situation of war China will basically batter their way through the first island chain. They will create the corridors for these bombers. Now will the bombers make it home? It’s a good question,” Goldstein said. “If they’re building the bombers, then I imagine that they think they can protect them and they can have a real mission set.”

China’s fleet of bomber and attack aircraft consists of around 450 planes, according to the Pentagon, with estimates putting the number of H-6s at about 230.

That fleet will continue to grow and be upgraded, but China is also working on other project. The country’s air force announced in 2016 that it was working on a “next generation long-range strike bomber.”

The new strategic bomber, referred to as the H-20, is expected to have a range of more than 5,200 miles, a larger payload that can include both conventional and nuclear weapons, “a stealthy design,” and “many fifth-generation technologies,” according to the Pentagon.

China’s air force has released promotional footage of H-20 models that look similar to the US’s B-2 stealth bomber.

China’s bomber development appears to borrow heavily from Russia’s experience, Goldstein said. A lack of other partners means Beijing has leaned on Moscow for complex training and advanced technology, particularly aviation technology that Chinese engineers have yet to master.

But projects like the H-20 illustrate how China is closing that capability gap, said Timothy Heath, a senior international defense researcher at the Rand Corporation.

“The stealth bomber, the Russians never developed anything like this,” Heath told Insider last year. “They’ve got the resources that the Russians simply don’t have anymore, so in many ways they are building on the Russians but now starting to exceed a lot of what what the Russians taught them.”