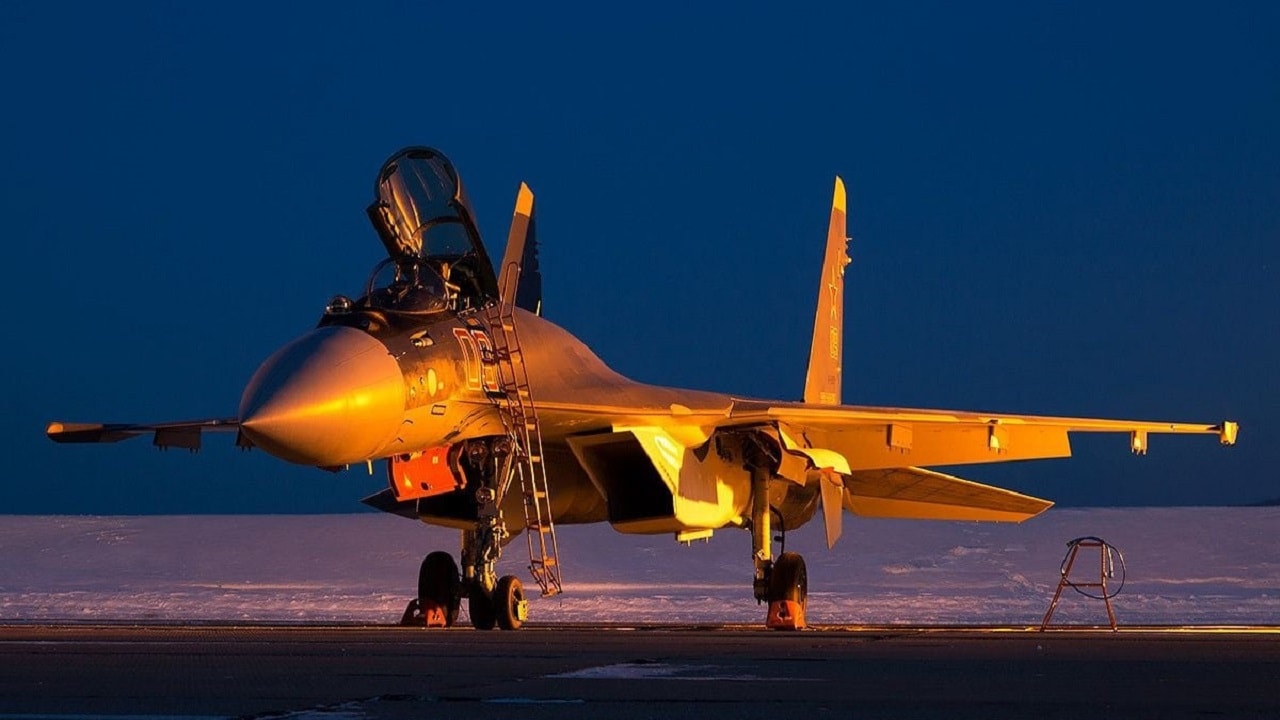 While Russian ground forces have been massing for months in areas around Ukraine since last fall for a military operation that is seeming increasingly inevitable, the same cannot be said for Russian Aerospace Forces or VKS.

There’s a simple explanation: warplanes can be redeployed to bases near the frontline quite rapidly. The same isn’t true for battalion tactical groups with dozens of heavily armored vehicles that require many days to deploy from out of theater. That means a mass redeployment can be mostly put off until the last minute.

Nonetheless, in February, Russian military aviation finally appears to be tentatively shuffling dozens of warplanes into Belarus, southern Russia, and even on the Baltic and Mediterranean seas in advance of a potential combat operation. After all, adequate aircraft still need to be in position for Day 1 of a military operation.

30,000 troops from Russia’s faraway Eastern Military District are currently deployed in Belarus, ostensibly for a joint military exercise with Belarus called Union Resolve. Clustered near the Belarus-Ukraine border, they could pose a significant threat to Ukraine’s capital of Kyiv.

The ground pounders have brought air support with them too—flown from over 4,000 miles away from Kharabovsk and Primorskiy Krai on the eastern end of Russia near Japan, the Koreas, and China. These jets may have been shifted early due to comparatively longer delay involved in getting them into theater as well as the air support deficit otherwise facing Russian forces in Belarus.

Imagery of Luninets shows that additional Su-25 have arrived. 32 Frogfoot are visible up from 15 on 4 February. (Imagery: @planet) pic.twitter.com/d4YkHJ9Cu3

These armored ground-attack aircraft are akin to the U.S. A-10 Thunderbolt: highly effective at swooping down to devastate vehicular columns and point targets with rapid-firing cannons and air-to-ground weapons but in turn susceptible to short-range air defenses and enemy fighters.

The Su-35S is Russia’s most advanced fighter in operational service, boasting supermaneuverable flight characteristics and a powerful though indiscrete radar. Though capable of ground attack missions, it would likely focus on air superiority missions early in a conflict, and might also patrol over Belarus with an eye towards NATO deterrence.

Primorskiy-Akhtarsk airbase, located on Russia’s coast on the Sea of Azov, is well situated to project airpower against the opposite Ukrainian coastline including the oft-targeted city of Mariupol just 75 miles northwest, or to support combat operations by the 22nd Army Corps troops should they attempt to break out from the Crimean Peninsula.

Ordinarily only hosting the Su-25 jets of the 960th Attack Aviation Regiments, satellite photos recently revealed the deployment of ten supersonic Su-34 Fullback bombers. Though long-ranged aircraft, the duck-billed Su-34s will be able to carry heavier weapons loads for shorter-range strikes—up to 17 tons of bombs and missiles.

The Fullbacks proved particularly effective in Russia’s Syrian air campaign, not only due to their greater payload and endurance but also their laser-targeting pods allowing them to both acquire and attack moving targets with laser-guided bombs. Compared to Su-25s, Su-34s are less vulnerable to Ukrainian air defenses due to their ability to accelerate to supersonic speed and their powerful electronic warfare self-defense systems.

It’s worth noting two additional larger Su-34 units are locally based nearby:

Russia is estimated to have just around a dozen Foxhound interceptors (dubbed MiG-31Ks or MiG-31Is) specially modified to carry a unique hypersonic missile—and in the last week and a half, the majority have been deployed to forward bases.

First, on February 7, four or five missile-armed MiG-31Is landed at Kaliningrad, a Russian exclave on the Baltic.

A Russian MiG-31K carrying a Kinzhal ballistic missile was spotted landing at the Kaliningrad Chkalovsk airbase on February 7.

The 9-A-76609 Kinzhal (‘Dagger’) air-launched ballistic missile accelerates up to 10 times of the speed of sound, and has an estimated range of 1,240 miles. This means it could strike West European capitals in ten minutes if launched by MiG-31s from the airspace around those bases.

Meanwhile, the 6.4-ton Kh-22 missile carried by Tu-22Ms can target ships up to 368 miles away traveling up to Mach 4.8, or approach more stealthily skimming at Mach 3 at sea-level out to a shorter distance.

Both missiles are believed nuclear-capable. However, Michael Kofman, an analyst specializing in the Russian military, advised the author he did not believe Kinzhal-armed aircraft had been equipped for a nuclear role so far.

The MiG-31I and Tu-22M deployments are likely aimed at deterring NATO intervention in Ukraine, highlighting the potential for Russia to promptly inflict meaningful costs should hostilities begin.

Realistically, a handful of forward-deployed MiGs would be unlikely to survive for long in a Russia-NATO slugging match, but they do bring to the table a first-strike capability. The Mediterranean-deployed jets could also pose a threat to the multiple NATO carrier-strike groups currently conducting exercises in the Mediterranean, as the Kinzhal reportedly has a radar-seeker for anti-ship missions.

Due to their long-range, there’s probably limited need to preemptively shift Russia’s fleet of subsonic Tu-95MSM Bear and supersonic Tu-22M Backfire and Tu-160 Blackjack bombers. However, Tu-22M bombers have been conducting overflights of Belarus, again likely with NATO deterrence in mind.

Should Russia attack Ukraine, these strategic bombers would likely remain outside the range of Ukrainian air defenses and launch long-range Kh-101 or Kh-555 cruise missiles to strike static targets, as well as anti-radar missiles to knock out Ukrainian air defense radars. Once high-altitude air defenses are deemed adequately suppressed, bombers may eventually be tasked with dropping unguided bombs from high up using the Hephaestus SVP-24-22 timed-release system—a tactic widely employed by Russian bombers over Syria with mixed results.

Large-scale movements by Russian helicopter units have also been observed in mid-February. Multiple images reveal the dispersal of dozens of helicopters to various temporary forward landing fields and forward bases.

The attack helicopters would be employed in large numbers to provide close support to ground troops in event of a new Russian invasion. The Mi-8s furthermore might be employed to insert Russian VDV airborne units behind enemy lines.

Despite significant limitations compared to U.S. airpower—lower availability of precision-guided weapons and lack of operational stealth aircraft, AESA radars, and combat drones—VKS combat aviation has significantly improved in the last decade, with roughly 75% of its 1,200 warplanes either significantly modernized or newly procured. Furthermore, the vast majority of VKS combat pilots today have flown in action over Syria, which the service used to test capabilities and improve tactics.

Traditionally subordinated to Russian ground forces, Russian airpower would nonetheless play a huge role in the event of an attack on Ukraine. Besides being used to strike critical targets—airfields, radars, depots, artillery systems, power plants, bridges, etc.—Russian warplanes could pose a huge threat to Ukrainian military columns attempting to reinforce troops on the frontline.

This poses the greatest difficulty for Ukraine’s military to combat, as it has only around 100 largely unmodernized combat aircraft and more numerous but still dated ground-based air defense systems, especially S-300P and Buk missiles. Effective dispersal, concealment, and electronic warfare tactics would be required to keep Ukraine’s warplanes and long-range air defense radars from being destroyed by standoff strikes in the opening days of a major Russian attack.