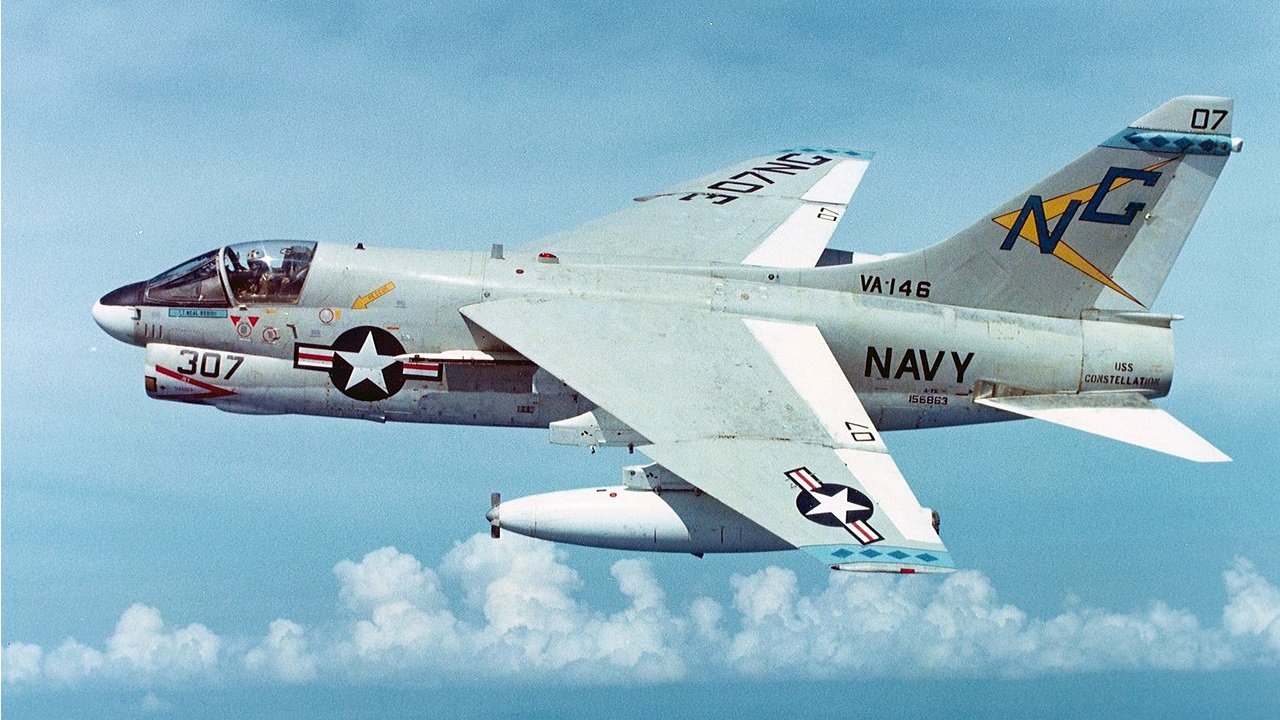 What Made The A-7 Corsair II So Special? Merriam-Webster defines the word corsair as “PIRATE especially: a privateer of the Barbary Coast.” So then, when the North Vietnamese Communist propaganda machine referred to American combat aviators as “Yankee Air Pirates” during the Vietnam War – which the flyboys actually took as a compliment – one wonders if Hanoi’s propagandists were thinking specifically of the Ling-Temco-Vought A-7 Corsair II.

The Corsair moniker already had a proud name in military aviation history going back to World War II, when the Chance Vought aviation company, now the Vought Aircraft Division of Triumph Aerostructures, produced the F4U Corsair fighter plane for the U.S. Navy and Marine Corps.  This original aerial Corsair finally enabled the USN and USMC to attain air superiority against the vaunted Japanese Zero, as most famously demonstrated by Major Gregory “Pappy” Boyington and his Black Sheep Squadron. F4U pilots tallied more than 2,000 aerial victories flown, versus a loss of a mere 189 Corsairs.

The aircraft continued in use into the Korean War, whereupon it was rendered obsolete for air-to-air combat thanks to the Jet Age, but still continued to prove itself quite adept for air-to-ground strikes. It was this latter role that Chance Vought’s R&D team specifically had in mind when they came up with the Corsair II. Although the A-7 did carry two AIM-9 Sidewinder heat-seeking air-to-air missiles, as well as a single M61A1 Vulcan 20mm cannon, it was not built to dogfight – unlike its WWII namesake. The only known instance of an A-7 pilot engaging an enemy fighter was on May 10, 1972 – the first day of Operation Linebacker I – when then-Navy Lieutenant George T. Goryanec took on a North Vietnamese Air Force MiG-17 and may have scored some hits with his cannon.

“Ugly?”  Beauty Is In the Eye of the Be(er)holder…

Oftentimes the case with military aircraft, their crews lovingly bestow unofficial nicknames on their warbirds that differ from the manufacturer’s official monikers. Thus the Corsair II became known as the “SLUF,” which stands for “Short Little Ugly…er, Fellow” (at least in polite company anyway, ahem, cough, cough), akin to the B-52 Stratofortress being dubbed the “BUFF” for “Big Ugly Fat Fellow.” As a personal aside, the first time I saw a picture of the A-7 – via the box cover photo on Monogram’s 1:48 scale plastic model kit – as a six-year-old lad – I actually liked the look of the darn thing. What can I say, I was a weird kid.

Debates about physical ugliness aside, the SLUF’s combat performance would prove to be a thing of beauty. The plane was conceived in 1963 as a replacement for the A-4 Skyhawk in the light attack role. As noted by the National Naval Aviation Museum’s official website, “Chance Vought’s proposal offered the best flying qualities, favorable maintenance characteristics, and lowest vulnerability at the lowest cost … While it brought no significant advantage in speed over the A-4 Skyhawk, the aircraft that became known as the A-7 Corsair II boasted nearly double the ordnance payload and a greater range.”

The Corsair II made her maiden flight in September 1965 and hit the ground running, or perhaps more accurately, hit the ground flying (so to speak). By December 1967 she was flying her first combat missions over North Vietnam, courtesy of Attack Squadron 147 (VA-147), aka “The Argonauts.” The Corsair’s pilots would soon grow to appreciate the plane for its reliability, low attrition rates, and accurate weapon delivery. The A-7E variant in particular achieved one of the lowest aircraft loss rates in Vietnam. The A-7II participated in some of the most important air battles of the Vietnam War, including the mining of Haiphong Harbor, Operations Linebacker I and Linebacker II, and the destruction of Thanh Hoa Bridge. The last U.S. air strike over Cambodia was made by an A-7D on August 15, 1973.

The Corsair II’s combat record continued well after Vietnam, as SLUF pilots saw action throughout the 1980s in Grenada, Lebanon, Libya, the Persian Gulf – the “tanker war” against Iran – and Panama. During the 1983 Operation Urgent Fury in Grenada in particular, A-7Es flew nearly 300 sorties during which they dropped 40 Mk 82 bombs and 20 Mk 20 Rockeye cluster bombs, as well as making good use of the 20 mm cannon to provide covering fire.

This performance prompted Vice Admiral Joseph P. Metcalf III’s overall operational command of the mission, to go on record stating, “The A-7 provided the turning point in the battle of St George [capital of Grenada], allowing the multinational force to quickly gain the upper hand.”

The A-7 Corsair II would return to the Persian Gulf for her last combat mission, that being Operation Desert Storm in 1991, this time taking on Iraq instead of Iran. The SLUF’s pilots – specifically from VA-46 and VA-72 aboard the USS John F Kennedy – went into action on the opening day of the conflict. In the predawn hours of January 17, 1991, 16 A-7Es from these two squadrons carrying AGM-88 HARMs attacked radar sites in and around Baghdad. All told, A-7Es finished their contribution to the Gulf War with 725 sorties flown and 3,100 combat flight hours logged. No A-7s were lost to enemy action.

The U.S. Navy and Air Force retired their chunky little “air pirates” in 1991, and the Air National Guard followed suit in 1993. However, the Portuguese Air Force, Royal Thai Navy, and Hellenic Air Force of Greece kept their Corsairs operational until 1999, 2007, and 2014 respectively.

Aviation history museum buffs can find SLUFs in museums in Greece, Poland, Thailand, and the U.S. alike. To name just a couple of the Stateside options, there’s the USS Midway Museum in San Diego, California, and the Patuxent River Naval Air Museum in Maryland.