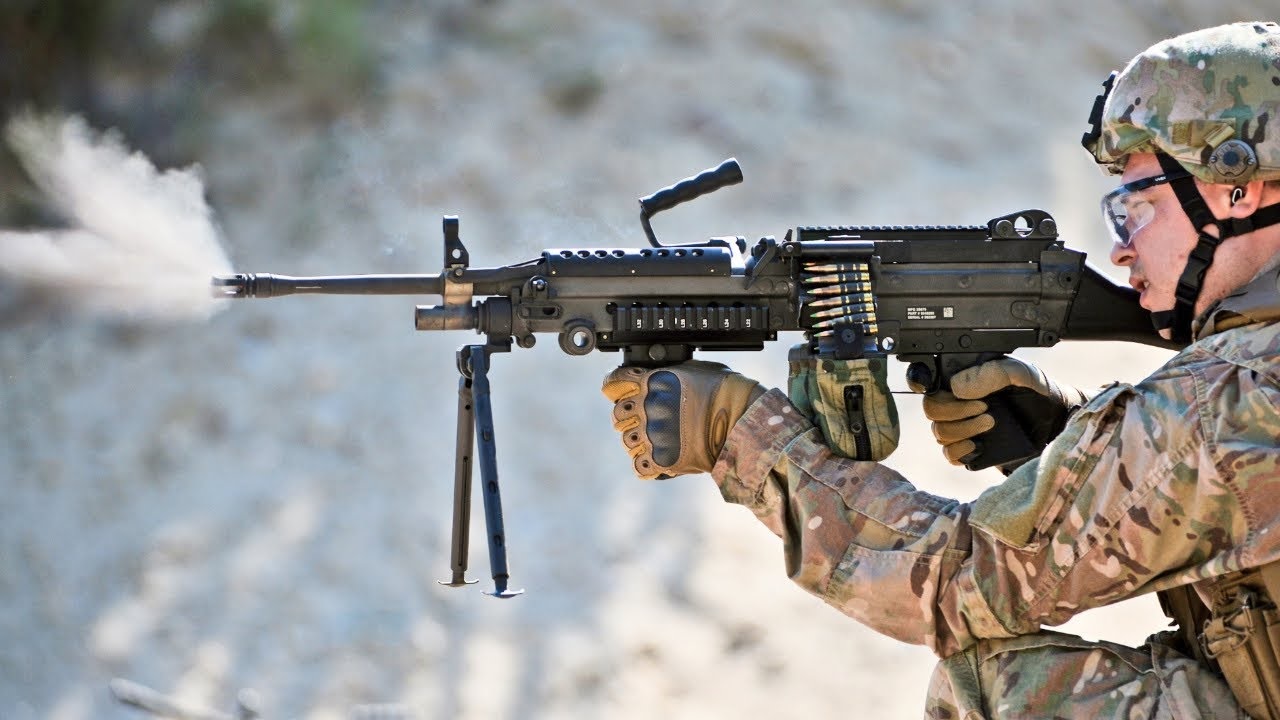 As I write these words, it’s the 23rd anniversary of my enlistment in the U.S. Air Force, so I thought this is as good a time as any to write an article about one of the weapons from my USAF Security Forces (“HOOAH!”) career that I haven’t yet discussed in my previous 19FortyFive articles: the M249 Squad Automatic Weapon (SAW). Not one of the more fondly remembered weapons in my military experience, mind you, but an important one nonetheless. And the gun has remained in service for nearly 40 years, so I suppose it must’ve been doing something right in that timeframe. Let’s take a look at the good, the bad, and the ugly of the SAW.

The M249 SAW – “(also known as the FN MINIMI),” according to the manufacturer’s official website – formally written as “Light Machine Gun (LMG), 5.56 mm, M249” – is manufactured by Fabrique Nationale (FN) Herstal of Belgium. It is an individually portable, gas-operated, air-cooled magazine or disintegrating metallic link-belt fed, LMG with fixed headspace and quick change barrel feature. It was initially designed in 1976 and officially adopted by the U.S. Armed Forces in 1984. The premise and reasoning behind the design and adoption of the SAW is described in detail by a Military.Com info page:

“The SAW was developed through an initially Army-led research and development effort and eventually a Joint NDO program in the late 1970s/early 1980s to restore sustained and accurate automatic weapons fire to the fire team and squad. When actually fielded in the mid-1980s, the SAW was issued as a one-for-one replacement for the designated ‘automatic rifle’ (M16A1) in the Fire Team … In this regard, the SAW filled the void created by the retirement of the Browning Automatic Rifle (BAR) during the 1950s because interim automatic weapons (e.g. M-14E2/M16A1) had failed as viable ‘base of fire’ weapons.”

As to the question of why not simply stick with the M60 AKA “The Pig” for this purpose, it was considered more of a general purpose machine gun (GPMG), very heavy and usually requiring a crew of two in order to operate efficiently (its single-man usage by movie heroes like John Rambo and Full Metal Jacket’s Animal Mother notwithstanding).

The end result was a 5.56x45mm LMG that weights 18 lbs, with a total length of 40.74 inches and a barrel length of 18 inches. The cyclic rate of fire is 800 rpm, with a maximum range of 3,600 meters and a maximum effective range against point targets at 800 meters. The gun saw its first major combat usage in 1989 during Operation Just Cause in Panama, followed by Operation Desert Storm, the Global War on Terror (GWOT), and so forth.

The SAW is now in the twilight of its career: in 2009, the U. S. Marine Corps selected the M27 Infantry Automatic Rifle, to partially replace the M249 in USMC; earlier this year, the U.S. Army selected the Sig Sauer XM250 as the SAW’s replacement.

As indicated in the opening paragraph, my experience with the SAW was garnered during my Air Force Security Forces days. More specifically, the enlisted USAF Security Forces Apprentice technical training course gave me my initial introduction to the gun. Though I’d fired fully automatic weapons – as in submachine guns – before, this was my first time working with a true belt-fed machine gun. Shooting it was fun. That was the only positive in my book

I found disassembly and especially reassembly to be an absolute bleepity-blanking nightmare! I’d thought the M16 was bad enough in having too many small parts to contend with, but the M249 was exponentially worse for me. Especially non-user-friendly in my book were the gas collar and cylinder tube; the struggle to get those damn things to pop back into place during reassembly nearly caused me to fail my timed Progress Check (PC)! Luckily I did pass that particular PC by the skin of my derriere and went on to be the Top Graduate of my tech school class. During the remainder of my 7-year active-duty career, I only had to deal with the M249 one more time, that being during the Security Forces Officer Course in 2004. To this day I’m thankful that it never became my officially assigned duty weapon.

Evidently, I’m not the only military veteran with a less-than-sterling impression of the SAW. Here’s what my old Iraq contracting and Cigar Club comrade Jay W. (he requested anonymity on his complete surname), a retired Army MP and Arms Room NCOIC, has to say about it:

“Bro, I hated that gun. The feed pawls, feed pawl springs, extractors, mag feed, and sometimes the charging handle would fail. And I won’t even mention the propensity to double-feed. F***. That. Gun.”

As Eric Idle said to his Monty Python crewmate Terry Jones in one particularly memorable sketch, “Say no more!”