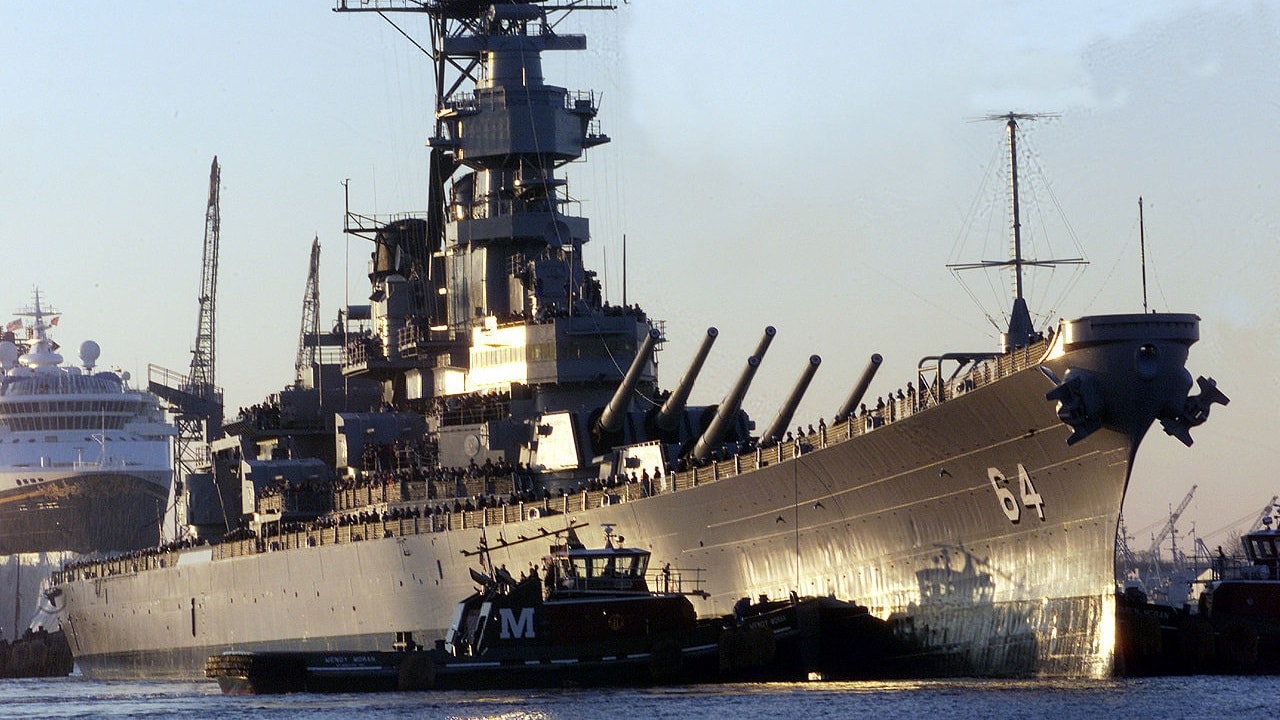 A tug boat nudges the bow of the battleship USS Wisconsin (BB 64) as the ship is pushed from the Norfolk Naval Shipyard to the Nauticus Museum in Norfolk, Va., on Dec. 7, 2000. The Wisconsin will be the centerpiece of a four-part exhibit on the battleship's role in Naval history.

Battlecarrier would have certainly been historic: The U.S. Navy often showcased its Iowa-class battleships, and these went in and out of service depending on the nature of the wars America was fighting. There was usually a movement in Navy circles to make them more relevant. Proposals included making them missile carriers, giving them nuclear-tipped shells, or allowing the Iowa-class ships to haul marines and boats for amphibious missions.

One of the more noteworthy concepts was to create a battlecarrier. This called for removing the guns from the aft of an Iowa-class battleship, and replacing them with ski jump ramps for Harrier jump jets.

In the early 1980s, when the Reagan administration oversaw a significant build-up in ships to keep the Soviet Union on its heels, the four Iowa-class battleships got a complete overhaul in weaponry. They received Tomahawk cruise missiles, Harpoon anti-ship missiles, and the Phalanx close-in weapons systems.

The USS Iowa, Missouri, New Jersey, and Wisconsin were back in business, and this upgrade was only part of the plan. A second update phase called for converting the ships to pseudo-aircraft carriers, hosting 20 Harrier vertical or short takeoff and landing (VSTOL) airplanes. VSTOL technology was improving, and by 1985 the AV-8B Harrier II was introduced to serve with the U.S. Marine Corps.

Under this carrier concept, each Iowa-class battleship would trade its 16-inch gun turret for two ski jumps, a hangar, and an elevator. Between each ski jump would be missile tubes holding Tomahawks and surface-to-air missiles.

This all sounded great, but it was not feasible. Skeptics harkened back to World War II, when the Japanese tried to convert some of their battleships to aircraft carriers; the conversion did not turn out well. Japan’s navy never used the two battleships that had flight decks.

The battleships would have needed 2,000 sailors to operate. The demand for that much specialized manpower increased their cost. An expensive refit would also have been unavoidable.

The Harriers could already fly from other ships, and the missile tubes in question were already being used on destroyers and cruisers, making them redundant on the Iowa class. Plus, the Navy determined that flat-top aircraft carriers were superior to ski-jumps. The Navy went back to its basic plan for the battleships, which was to use their main guns for massive firepower to support ground troops and amphibious landings.

The Battlecarrier Was a Neat Idea

Perhaps the Navy should have focused on a smaller deck that would have equipped the Iowas to launch anti-submarine-warfare helicopters. This idea was considered during the Vietnam War, but it was rejected in favor of maximizing the battleships’ shore bombardment capability. In fact, the New Jersey hit Lebanon hard, and the Wisconsin and Missouri shelled Iraqi targets during Operation Desert Storm.

The Navy never executed the carrier option, and the Iowa class faded into retirement. But the battlecarrier was a neat idea. It showed how naval battle planners wanted to maximize firepower and deliver Harriers into battle. It would have granted the Navy another option to project power around the globe, and it would have given the Soviets more to worry about. But after the first Gulf War, the Iowa class was on its way out. The ships would not have been needed after the Cold War, anyway.