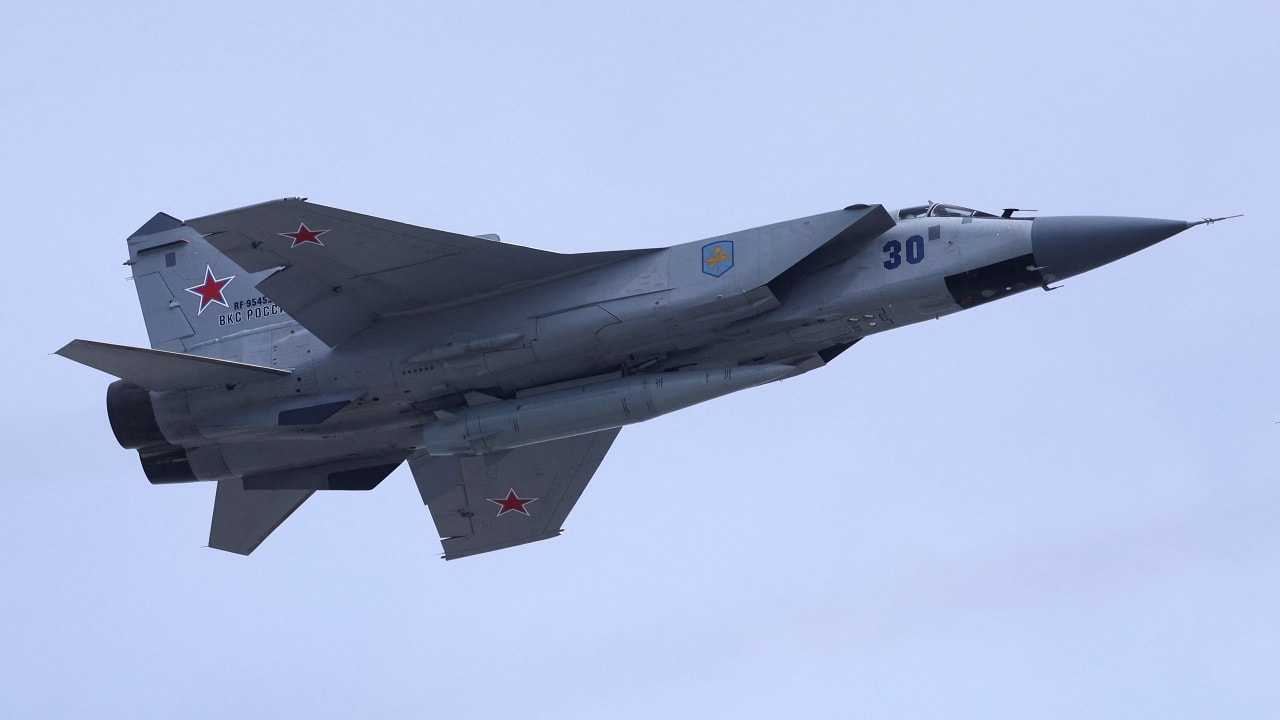 A Russian MiG-31 fighter jet equipped with a Kinzhal hypersonic missile flies over Red Square during a rehearsal for a flypast, part of a military parade marking the anniversary of the victory over Nazi Germany in World War Two, in central Moscow, Russia May 7, 2022. REUTERS/Maxim Shemetov

The Kinzhal bombardment also featured the Soviet-era Kh-22 cruise missile. Up to seven munitions were launched against Odessa. The Russians were trying to punish the city’s residents while European Council President Charles Michel visited. Michel was forced to take cover during the attack.

“Putin could not capture Odessa, and so he has started to destroy its infrastructure,” Ukrainian politician and Odesa resident Oleksiy Honcharenko told Michael Wasiura of Newsweek. “Local residents are amazed at the cynicism,” Honcharenko added. “Yesterday, with one hand, Putin placed flowers on the pedestal of the hero city Odessa, and with the other hand he thrust the dagger into the back of Odessa.”

The Russians have long set their sights on Odessa as a target for invasion. Many residents refuse to evacuate, even though Russian ships are threatening the port.

The people of Odessa should take heed of Russian high-speed weapons such as the Kinzhal, which can travel over MACH 10 and make flight adjustments on its approach to targets. The Kinzhal, or “Dagger,” is not technically a hypersonic weapon, despite its high speed — it does not use technologies such as boost-glide or scramjet that define the two main categories of hypersonic missiles. But the Kinzhal is fearsome just the same, and Odessa’s defenses have no answers for it.

Putin believes the Kinzhal is invincible. It can be fired from a MiG-31K Foxhound warplane. There are reportedly six Foxhounds that are modified to carry it out of a base in Southwest Russia. It can also be launched from a Tu-22M3 Backfire bomber inside Russian air space.

The Russians are likely to use the Kinzhal for propaganda effect, and not as a main feature of attack. The missiles are expensive, and they are not produced in high numbers like other cruise missiles in Russia’s arsenal. The Kinzhal is nuclear-capable, and Putin is likely reminding the world that he can target any city in Ukraine he wants with a nuclear missile that Ukraine’s air defenses cannot stop.

The Kinzhal has a maximum range of 1,242 miles. It is about 24 feet long with a 3-foot diameter, and it carries a 1,058-pound warhead. The missile has been in service since 2017. Some analysts say it is based on the ground-launched Iskander missile being used in Ukraine. The Kinzhal has a flight trajectory that is difficult for air defense interceptors to shoot down.

The Kinzhal launch on Victory Day can be seen as a symbolic measure. It made no difference in Odessa. But look for more standoff missile attacks against civilian targets in the port city using older, cheaper, and conventional Soviet-era cruise missiles.