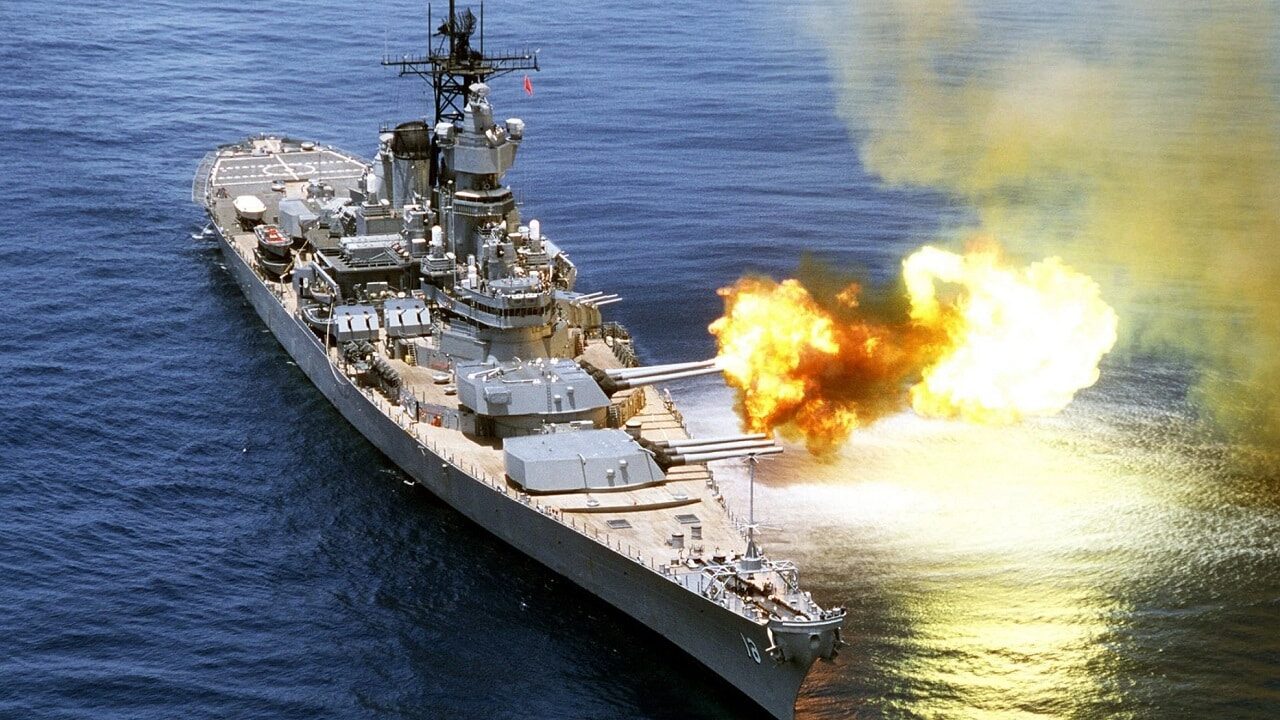 The Iowa-class battleships were unretired so many times for a simple reason: they were the best battleships to ever sail. And the USS Wisconsin might just be the best of the best. Here is her story: USS Wisconsin (BB-64) was the third Iowa-class battleship to be constructed during the Second World War. Built at the Philadelphia Naval Shipyard in Philadelphia, Pennsylvania, she was launched on December 7, 1943 – the second anniversary of the Pearl Harbor raid. During the war, she served exclusively in the Pacific, but later would see service that would take her around the globe.

As with her sister ships in the Iowa-class, BB-64 was designed as a “fast” battleship that mixed speed and firepower, which enabled her to maintain pace with a carrier strike force, while still sleek in design so as to be able to travel through the Panama Canal. She displaced 45,000 tons, was just under 900 feet in length, she had a crew of some 1,600 men.

Sponsored by the wife of then Wisconsin Governor Walter Goodland, her motto was “Forward for Freedom.”

Armed with a main battery of 16-inch guns that could hit targets nearly twenty-four miles away with a variety of artillery shells, the Iowa-class were among the most heavily armed U.S. military ships ever put to see.

BB-64 was the second battleship named for the Badger State. The first ship named for Wisconsin had been BB-9, the third and final Illinois-class pre-dreadnought. BB-9 served as part of the “Great White Fleet” – the nickname for the group of United States Navy battleships that completed a journey around the world from December 16, 1907 to February 22, 1909 by the order of then President Theodore Roosevelt.

A planned Columbia-class, SSBN-827, will also be named for Wisconsin. She will be the second boat of the new of class ballistic missile submarines and is set to be laid down in 2024.

After the Second World War, USS Wisconsin was briefly decommissioned, and then reactivated for the Korean War, and provided naval gunfire support duties against enemy bunkers, command posts and artillery positions. Wisconsin earned five battle stars for her World War II service, and one for the Korean War.

Back to Service in the Decade of Excess

When then President Ronald Reagan called for a 600-ship U.S. Navy in the 1980s, all four Iowa-class battleships – including BB-64 – were reactivated and upgraded with new combat systems that replaced many of the ships’ smaller five-inch guns with a launcher for Harpoon anti-ship missiles, thirty-two Tomahawk cruise missiles and four Phalanx close-in weapon systems (CIWS). Initially equipped with 40mm anti-aircraft guns, during the Cold War those were replaced with missiles, electronic-warfare suites and Phalanx anti-missile Gatling gun systems.

Along with her sister Iowa-class battle wagon, USS Missouri (BB-63), USS Wisconsin actually employed the new weapons in combat operations when she was deployed to the Persian Gulf as part of Operation Desert Storm. During the campaign the two World War II era battleships launched Tomahawk missiles at Iraqi targets, and conducted naval fire missions to convince the Iraqi Army that the coalition forces would engage with an amphibious assault, tying up thousands of Iraqi units. 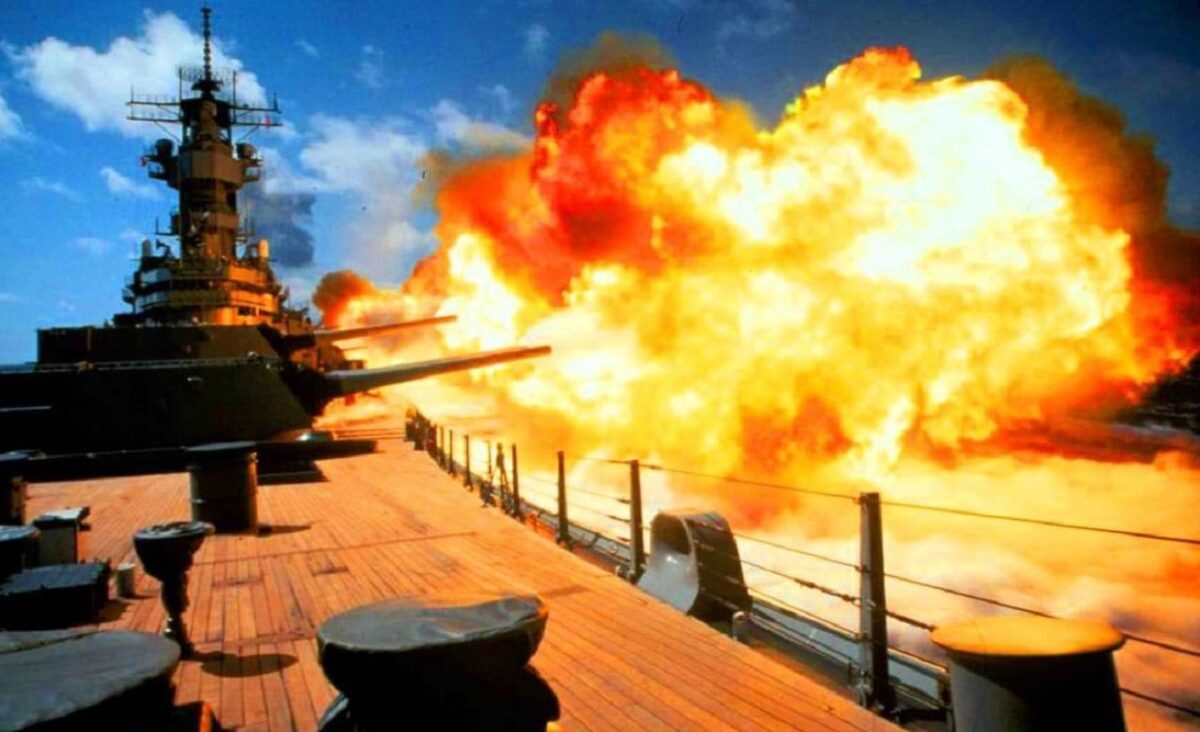 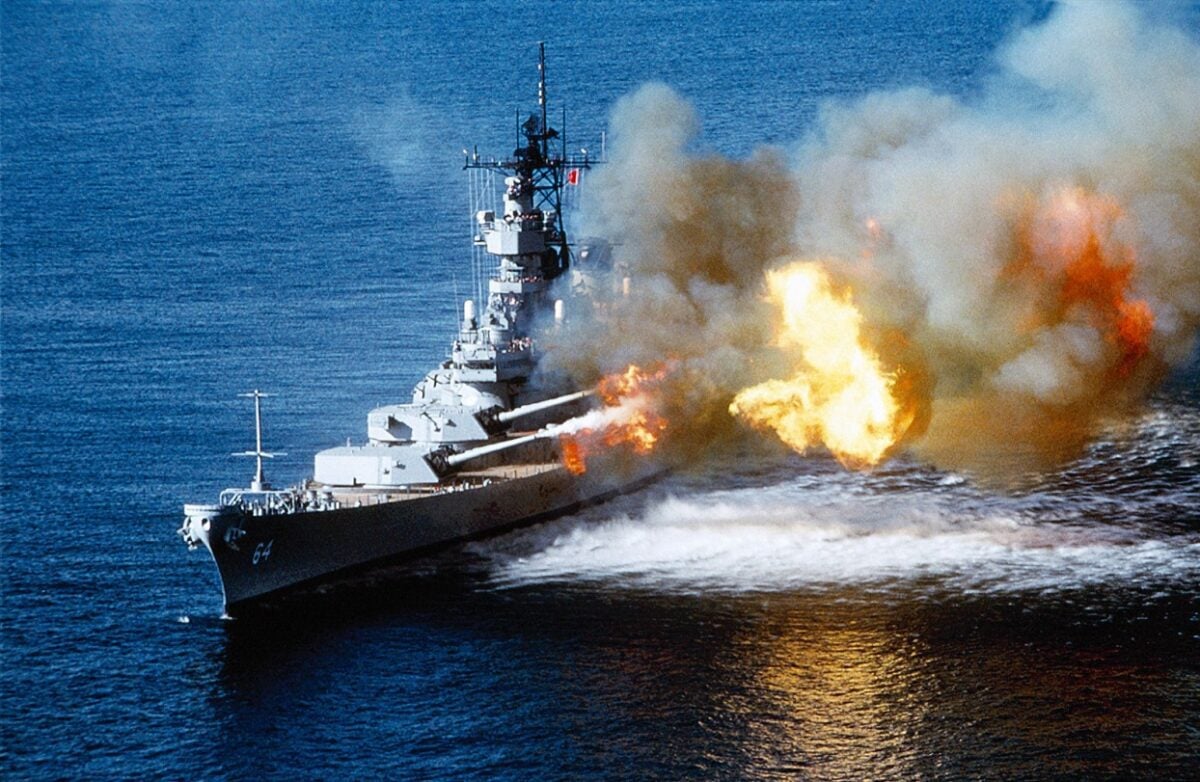 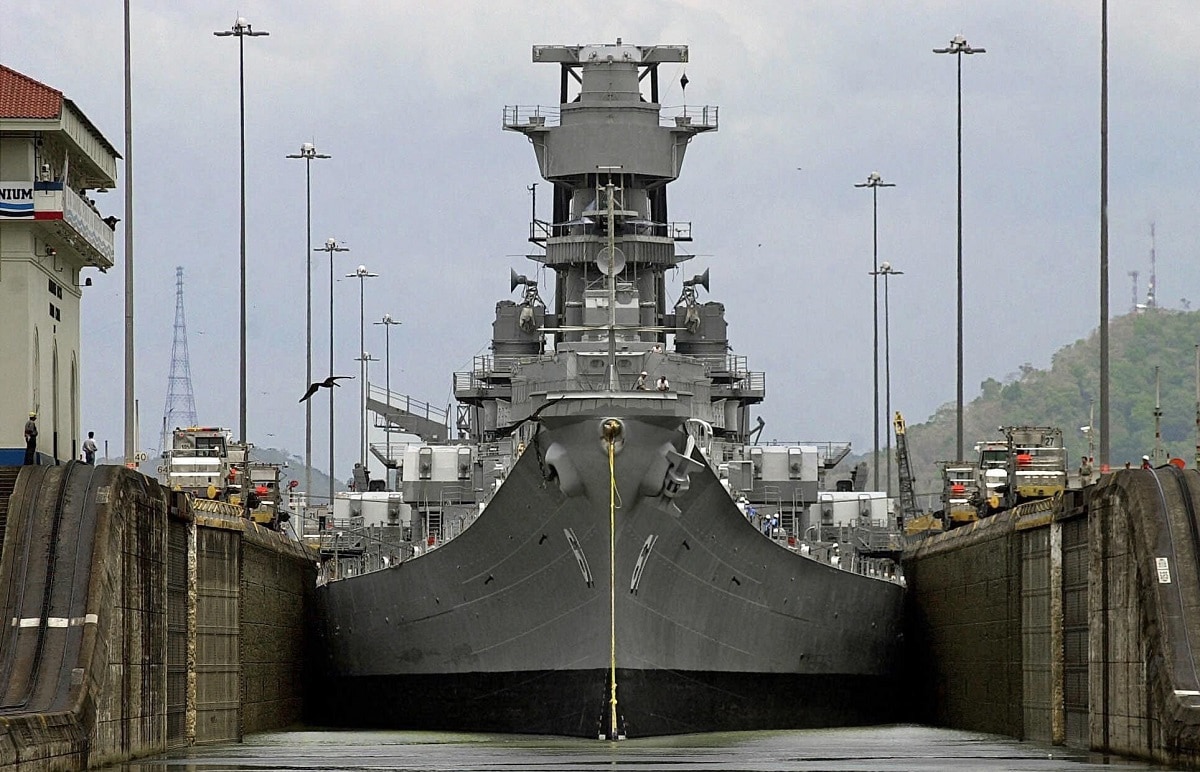 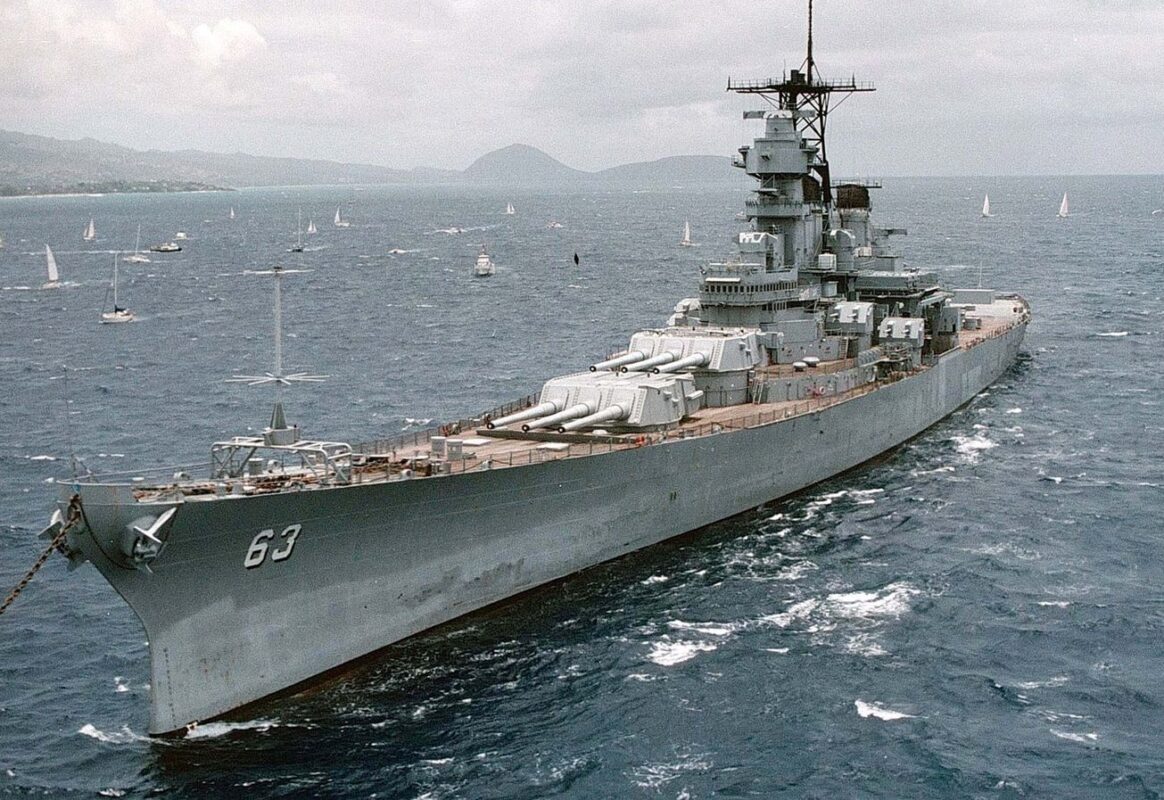 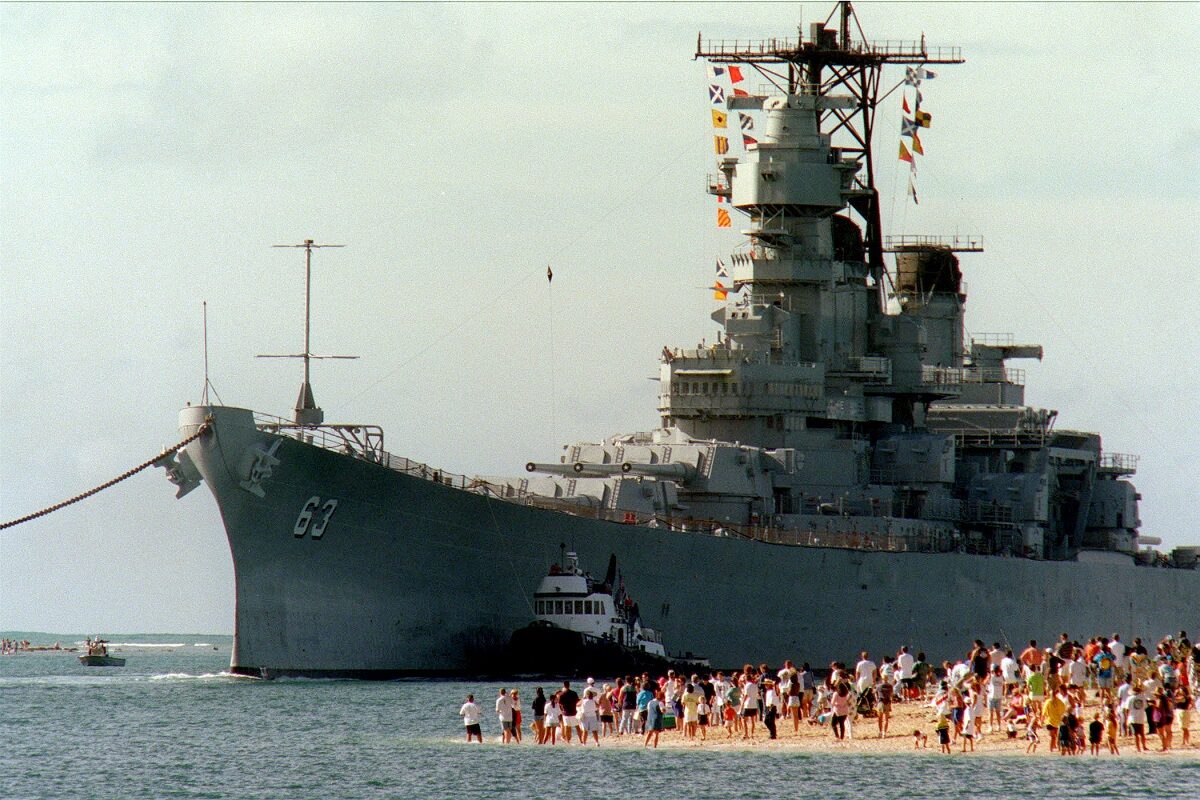 People gather on the beach to see the battleship USS Missouri (BB 63) enter the channel into Pearl Harbor, Hawaii, on June 22, 1998. Secretary of the Navy John H. Dalton signed the Donation Agreement on May 4th, allowing Missouri to be used as a museum near the Arizona Memorial. The ship was towed from Bremerton, Wash. DoD photo by Petty Officer 1st Class David Weideman, U.S. Navy.

Decommissioned But Not Scrapped

In 1991, USS Wisconsin was decommissioned again, yet along with USS Iowa (BB-61), she was maintained in the United States Navy reserve fleet in accordance with the National Defense Authorization Act of 1996 for potential use as a shore bombardment warship.

In March 2006, the Secretary of the Navy exercised the authority to strike the two World War II battlewagons from the Naval Vessel Register (NVR). Along with the other Iowa-class battleships, Congress ordered that while each could be converted into museums, none could be altered in any way that would impair their respective military ability. Theoretically, Wisconsin and the other Iowa-class warships could be reactivated for service if the need came – yet that is unlikely to happen.

However, it does ensure that the warship can be enjoyed for years to come, and serves as a lasting memorial to those sailors who served onboard. Today, USS Wisconsin is preserved as a museum ship in Norfolk, Virginia. She is listed on the National Register of Historic Places, and remains one of the last American battleships to fire her guns in anger.