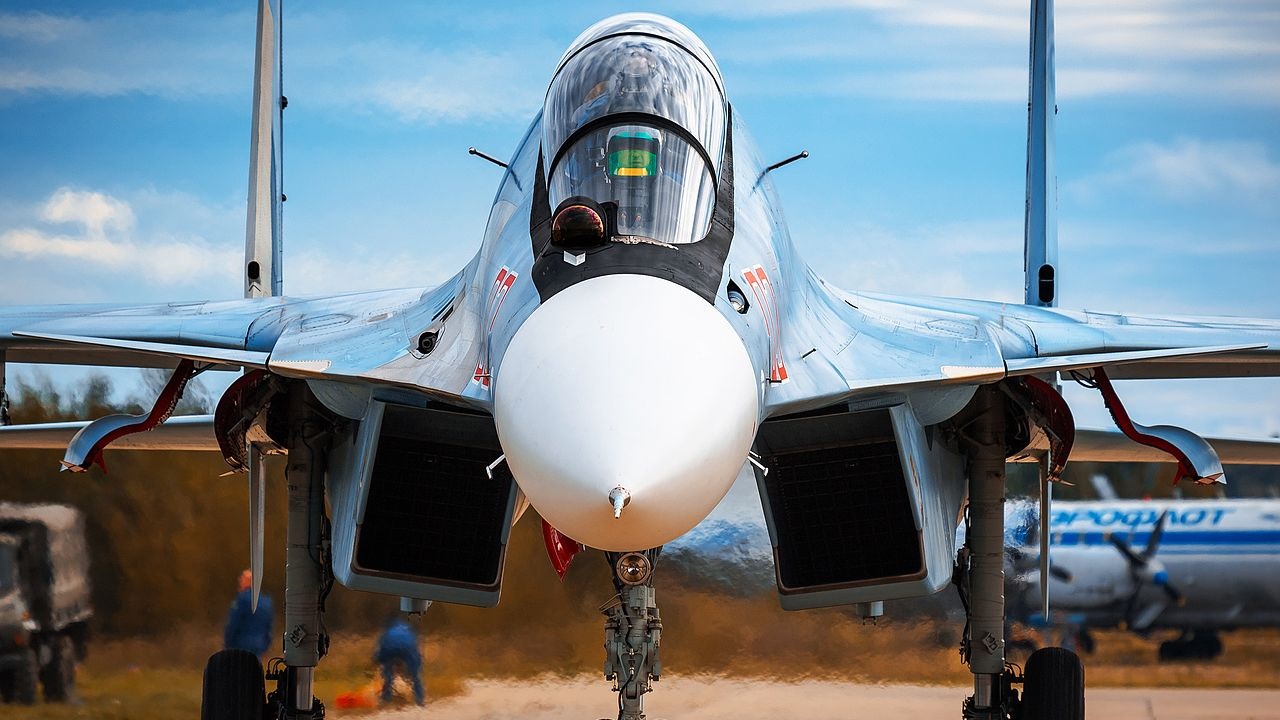 Su-30 and Su-35 over Ukraine: An Asset or Problem? Two of Russia’s most modern multi-role fighters have spearheaded Moscow’s air war over Ukraine: the two-seat Sukhoi Su-30SM (code-named Flanker-H by NATO) and its successor, the single-seat Su-35S Flanker-E. Both share a common lineage with the large and powerful Soviet Su-27 jet that entered service late in the Cold War.

This article seeks to identify the various Flanker models and units committed by Russia to its invasion of Ukraine, kills and losses ascribed to them, and how they have performed these missions.

The Russian Air Force (VKS) is currently receiving the last of 128 Su-35s ordered, most now committed to the war in Ukraine.

That leaves only one operational Su-35S squadron in the 22nd Fighter Aviation Regiment not deployed for the war in Ukraine, and another 25 aircraft in training and testing units.

The VKS’s Su-35 inventory could be reinforced by 24 jets Russia built for Egypt, only for Cairo to cancel the order. However, recent statements suggest Moscow may sell or trade these to Iran in exchange for Iranian drones.

Su-30 and other Russian Flankers

The two-seat Su-30SM jet (Flanker-H) is visually distinguished by its canards, a second set of small wings by the nose, which enhance maneuverability. The Flanker-H’s backseat weapon systems officer can help manage weapons and sensors, particularly for ground attack missions.

Prior to hostilities, the VKS counted 91 Su-30SMs in service and 24 Su-27SM3s (out of roughly 100 Su-27s of all models). Russian Naval Aviation operated 22 Su-30SMs and has received at least four Su-30SM2 ‘Super Sukhois’ designed to ‘unify’ its engine, avionics and radar with the Su-35S.

A VKS squadron of older but upgraded Su-27SM3s single-seat fighters is also active, primarily in a defensive counter-air role.

In Crimea, the Russian Navy also had a squadron of 19 Su-30M2 jets based on two-seat Su-30MK2 export strike jet, a less sophisticated, canard-less rival to the Su-30SM mostly used for training; and possibly Su-33 jets designed to fly off of Russia’s currently non-operational carrier Admiral Kuznetsov. These haven’t been reported to be active in Ukraine.

The first weeks of Russia’s invasion of Ukraine saw Russia’s Flankers engage in multiple air-to-air clashes over the Kyiv region and Ukrainian airbases in nearby Zhytomyr. As detailed in a companion article, Ukrainian sources confirm the loss of five MiG-29s and one L-39 jet trainer in air-to-air combat. Additionally, a Ukrainian Su-27 was downed by a ground-launched S-400 missile while dogfighting Russian jets. Reportedly, Su-30SMs were often assigned to escort attack aircraft, while Su-35s performed aggressive patrols.

There is footage of just one close-range air battle resulting in a kill: an Su-35 shooting at a Ukrainian Mi-14 helicopter over Odesa Bay and missing. Afterward, the Flankers reportedly destroyed the helicopter with an R-73 missile.

This is reportedly video of a Russian fighter attempting to shoot down a Ukrainian Mi-14 helicopter in Odesa Oblast. The Russian source claims the helicopter was shot down with an R-73 air-to-air missile on the next pass.https://t.co/OsSmfMqVJQhttps://t.co/5wkBucElDW pic.twitter.com/UQ8Oyz9x9o

As explained in a companion piece, due to superior radars and long-range missiles, Russia’s Flankers have big technical edges over Ukrainian fighters in beyond-visual-range warfare. However, Russian pilots appear unwilling to aggressively press the fight into Ukrainian-controlled airspace due to the threat posed by ground-based air defenses.

Su-30SMs and especially Su-35Ss have waged Russia’s Suppression of Enemy Air Defense (SEAD) campaign over Ukraine, typically armed with a Kh-31P and Kh-31PM missiles designed to home in on the signals of enemy radars from 70 and 155 miles away respectively. These accelerate to twice the speed of sound using a ramjet engine and are used to hunt Ukraine’s more powerful Buk and S-300P medium/long-range air defense systems. The Su-35 has also deployed the older Kh-58 anti-radiation missile.

Despite the formidable armament and some successes in the war’s opening days, Russia’s SEAD campaign failed to neutralize Ukraine’s extensive air defenses, which may include over 270 S-300 and Buk systems.

* List omits losses due to capture (ie. not due to SEAD)

This undoubtedly reflects Russia’s minimal experience with, and inadequate training for, SEAD operations. Furthermore, some Kh-31-armed Flankers have been downed by defenses.

British military aviation analyst Justin Bronk writes for RUSI early in the war “…the need to stay out of effective range of short- and medium-range SAMs has meant that [Kh-31] launches have a very low probability of kill (Pk), and generally only serve to temporarily force Ukrainian SAM operators to turn off their radars for a short period while the ARMs are in the air.”

#Ukraine: Some very rare new footage has emerged, apparently of a Ukrainian 9K37M1 Buk-M1 in use against a claimed Russian jet. The hit is successful and the aircraft falls.

We don’t know precisely when or where, except it looks very cold. ❄ pic.twitter.com/4ywWVKThJb

Cooper saw little evidence these raids had much success: “As far as I can say, the entire effort ended in a big failure: they hit next to nothing, and Ukrainian air defenses along the frontline remain perfectly intact.

The Su-30 and Su-35s have also been leveraged for ground attack roles, mainly using the Kh-59 subsonic air-to-surface missile with a range of 124 to 180 miles (model depending) — far enough for launch outside air defense range. Flanker-delivered Kh-59 attacks have struck airbases, grain silos, infrastructure, and apparently a public toilet. However, inbound Kh-59s also reportedly suffer attrition from Ukrainian air defenses.

Ukrainian Air Defence had claim that they’ve shot down an Su-30 wiv OSA missile system. It turns out that they shot down Russian Kh-59 cruise missile probably launched by the Su-30 pic.twitter.com/HjQPqM44gN

Russian Flankers have also been used for ground attack missions using unguided bombs and rockets in the Sumy and Kharkiv sectors. They have leveraged their greater range/endurance for operations over Snake Island, trying to stiffen the beleaguered garrison’s air defense against harrying Ukrainian aircraft. Russia claims Flankers downed Ukrainian bombers, helicopters, and TB2 drones near the island, without evidence.

After Snake Island was reclaimed by Ukrainian troops, two Su-30SMs (or possibly Su-24 bombers) bombed the island. Moscow claimed the strike caused massive casualties; a video released by Russia shows only one of three bombs hitting.

Kyiv claims to have downed “two squadrons” of Su-35s, but there are only a couple corroborating wrecks. Russian reports almost never specify the causes of a loss in the so-called “special operation.”

However, an Su-35S armed with R-77-1 and Kh-31P missiles underwing was confirmed destroyed on April 3 near Izium by ground-based air defense, with the pilot ejected. Components from the downed Su-35 were reportedly transferred to the UK and US for study by specialists.

Another Su-30 or Su-35 was filmed crashing in flames over southern Ukraine near Khakovka in July. Allegedly, it was downed either by Ukrainian or  Russian (friendly fire) ground-based air defenses, possibly confusing it with a HIMARS rocket.

Video of a Russian aircraft shot down in Kherson. Ukrainian officials are claiming it was a Russian Su-35S fighter. Given the location, it is possible Russian air defenses shot down their own aircraft. https://t.co/DEJ9eYskmwhttps://t.co/tw7kELTvlP pic.twitter.com/lIxWHs3sZo

Russia’s Su-30 fleet has seemingly been harder hit overall, with at least 3 downed by Ukrainian forces (two by air defense, one cause unclear) and at least 4-5 – possibly more – destroyed on the ground.

– 3/05: Russian Navy 43rd Naval Attack Regiment Su-30SM shot down near Bashtanka by air defense; pilot ejected and captured, claimed he was on a radio recon mission

#Ukraine: More Russian aviation was downed today in the area of #Mykolaiv, this time an Su-30SM.

According to the interrogation of the pilot, he flew with Military Unit 59882 of the naval aviation of the Black Sea Fleet of the Russian Federation. pic.twitter.com/C61GRwSJro

In this article:featured, Russia, Su-27, Su-35, Ukraine, War in Ukraine