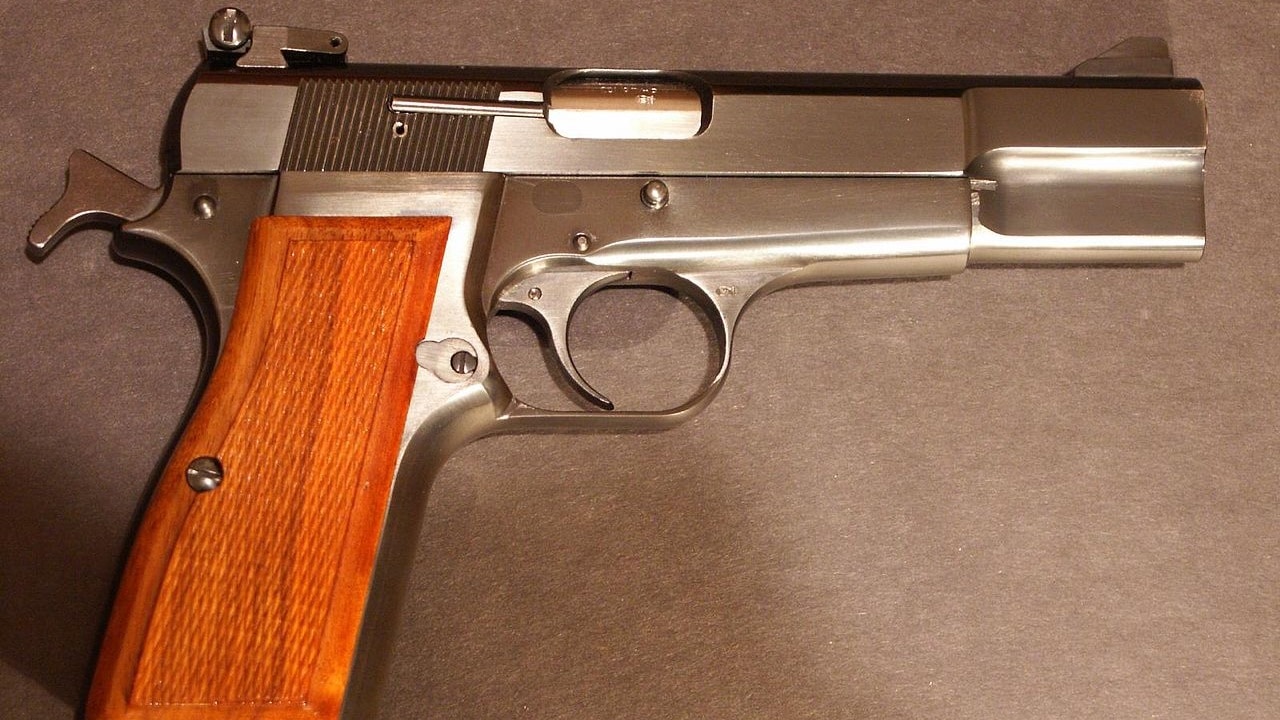 Browning P-35 Hi-Power 9mm, Explained: Dear readers, for the second time this week, I must confess to having been remiss, for which I humbly beseech your collective forgiveness.

Though I’ve penned articles on two of the legendary gunmaker John Moses Browning’s top three most enduring inventions, namely M1911 .45 ACP and the Browning M2 .50 caliber heavy machine gun AKA “Ma Deuce” I’ve yet to do a standalone article on the remaining member of that terrific triumvirate, the Browning P-35 Hi-Power 9mm semi-auto pistol.

Granted, I’ve made references to the gun in other articles. Still, now it’s time to make up for lost time and give the Hi-Power AKA the BHP AKA the “Grand Puissance” AKA the L9A1 (the official designation conferred by His Majesty’s Armed Forces), its proper moment under the spotlight.

Some folks would consider the BHP the first of the “Wonder Nines” due to its 13 + 1 magazine capacity. However, other nitpickers would contest that designation because the P-35 is a single-action (SA) and not a double-action (DA) like the Beretta 92F/M9 and CZ-75 (to name just a couple of examples) or a striker-fired autoloader like the Glock 17.

Semantic nitpicks aside, its high ammo capacity – which also was the reason for the name, as opposed to the inherent ballistic capabilities of the 9x19mm Parabellum cartridge – was certainly revolutionary for its time.

Hard to believe as this may seem, the late great Mr. Browning actually envisioned the Hi-Power as an improvement over the M1911! Given how so many experts still consider the latter to be the best combat pistol ever designed, these same people may wonder how one could possibly improve upon it. These big-bore aficionados would consider the smaller caliber to be a serious downgrade from the .45 ACP cartridge!

In any event, some of the design changes from the 1911 to the BHP included: replacing the swinging barrel link with a more durable fixed locking cam, replacing the sliding trigger with a pivoting trigger – some would also dispute as to whether this constituted a true “improvement” – and doing away with the separate barrel bushing and recoil spring plug (definite improvements IMHO).

Alas, Mr. Browning didn’t live long enough to get to see the final finished version of this particular product of his, as he died of a heart attack in 1926 at age 71, nine years before the pistol was perfected and finalized. So, it fell upon Belgian gun designer Monsieur Dieudonné Saive to carry on Mr. Browning’s legacy and apply the finishing touches, finally doing so in 1935 (hence the both P-35 and Francophone Grande Puissance designations/sobriquets).

The end result was –and still is – a pistol with delightfully slim ergonomics despite its double-stack magazine, though also a trigger action that’s been roundly cursed by gunsmiths due to the relative difficulty of customizing and tuning it compared with the 1911 trigger.

The pistol has an overall length of 7.8 inches, a barrel length of 4.7 inches, and a weight of 32 ounces (7 ounces lighter than the 1911 for basis of comparison).

As with just about every other Browning-designed firearm, the BHP soon established an excellent reputation for accuracy, reliability, and durability…but then the pistol went above and beyond that: it became the most widely used military, police, and counterterrorist pistol in the world and held onto that status for several decades before finally starting to give way to DA and striker-fired autos starting in the 1990s.

Arguably the most elite users of the P-35 were the British Special Air Service (SAS) — whom highly respected combatives expert Leroy Thompson rated as the top counterterrorist unit in the world — and the FBI’s Hostage Rescue Team (HRT).

Moreover, it was the only handgun widely used by both the Allies and the Axis during WWII; the Allied side of the fence thanks to its issuance to the armies of Great Britain and Canada; the Axis side of the fence stemming from Nazi Germany’s occupation of Belgium, which resulted in the Wehrmacht running the Fabrique Nationale (FN) plant and building the pistols under the label “9mm Pistole 640(b).”

Fast-forward to the 1991 Persian Gulf War, and the Hi-Power was once again being wielded by our British and Canadian allies…and on the flip side, was Saddam Hussein’s personal choice of pistol.

I bought my own bona fide Browning P-35 Hi-Power 9mm as an early birthday present to myself back in 2007; a buddy of mine did a serial number look-up for me and determined that it had made back in 1967.

Over the years, I’ve fired approximately 4,000 rounds through her, and accuracy from 7 yards to 25 yards — reliability, and general handling characteristics were all top-notch.

The only negative was that the only issue being that the factory original front sight sheared off at some point, so my then-local gunsmith, Mr. T.J. Jimakas of TJ’s Custom Gunworks, installed Smith & Wesson revolver-style sights as replacements. Not my first choice for CCW work, but still a gun I could count on if and when the chips are down.

You’d better believe that I can and do recommend this pistol for self-defense, competition, and pride of ownership alike. As the Browning official info page states, “the Hi-Power is technically out of production. Current dealer inventories will be the last available from Browning for the foreseeable future. Of course, periodically, special custom versions will continue to be available from the John M. Browning Custom Shop in Herstal, Belgium.”

Luckily, since over 1.5 million Hi-Powers have been produced over the past 87 years, including high-quality clones produced under license around the world such as the Argentine FM and the Hungarian FEG, which translates to plenty of surplus market options for an aspiring new Hi-Power owner.