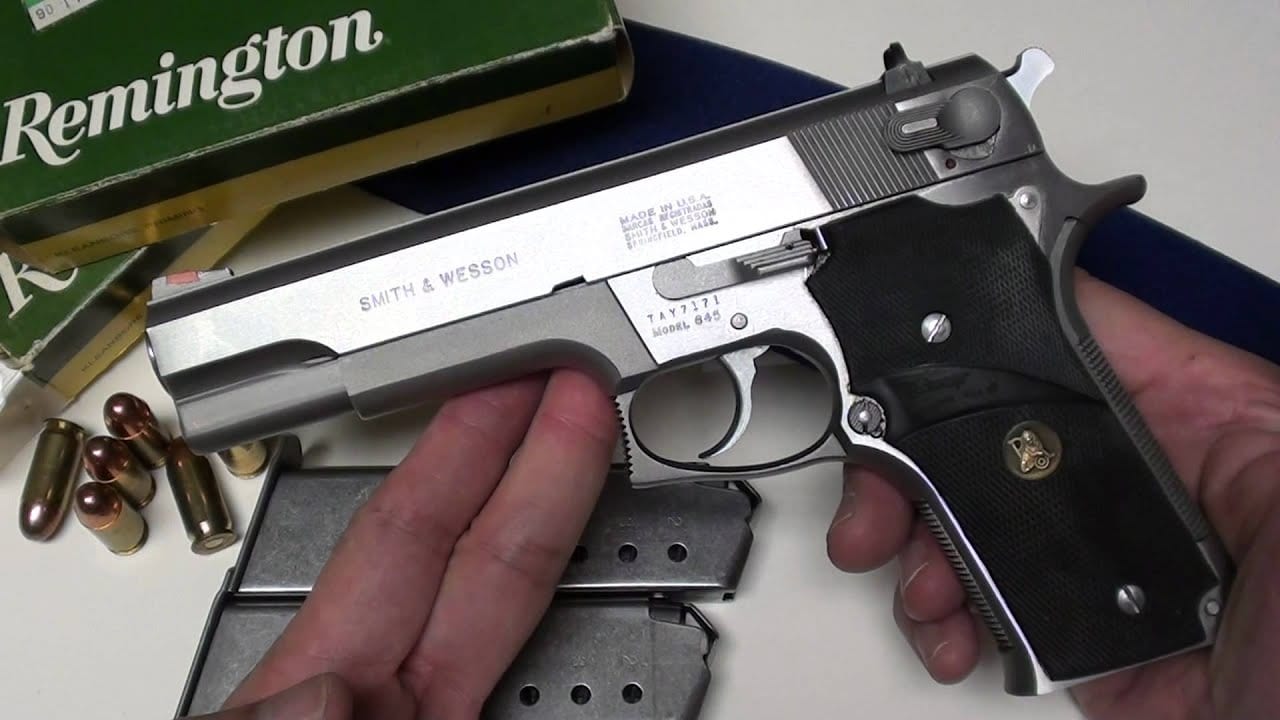 Meet the Smith & Wesson Model 645 and 4506: Before the SIG Sauer P220 came along in the mid-1970s, fans of the .45 ACP cartridge who wanted a double-action (DA) semiauto pistol in their beloved caliber were S.O.L; their choices were the classic Colt M1911 single-action auto (Colt was pretty much the brand choice for 1911s until Springfield Armory got involved in that market in the 1980s) or double-action revolvers such as the First World War-vintage M1917s from Colt and Smith & Wesson. While the P220 was – and still is – an excellent firearm, it was European-made, and to a lot of patriotic American shooters, it must’ve seemed incongruous at the time that an American-designed cartridge like the .45 ACP didn’t have an American-made DA auto pistol being produced for it. That was finally remedied in 1985 with the Smith & Wesson Model 645.

Perhaps it was fitting & apropos that Smith & Wesson would be the first American gunmaker to produce a DA .45 ACP auto pistol. After all, even though they’re known first and foremost as a revolver maker, S&W does know a thing or two about auto pistols as well; their Model 39 was the first U.S.-made 9mm DA auto pistol as well as the first of its kind to be adopted by a Stateside law enforcement agency – that being the Illinois State Police in 1967 – as well as the first domestically-produced high-capacity DA “Wonder Nines” in the guise of the Model 59.

While the M39, M39-2, and M59 were Smith’s 1st Generation of auto pistols, the stainless steel M645 was a member of the 2nd Generation. Besides the standard caliber with the M1911, it had similar size to the classic M1911, with an 8.5-inch overall length and a 5-inch barrel, and weighing in at a hefty 2.3 pounds.

However, the newcomer had one more round of magazine capacity (8 rounds vs. 7 rounds), dispensed with the separate barrel bushing, had a squared-off and serrated trigger guard, and most significantly the DA trigger in tandem with the safety/decocking lever.

Chris Eger of Guns.Com notes that “This latter feature meant that the gun was more appealing to officers in departments that wanted to carry a .45 but was forbidden to do so in cocked-and-locked single-action pistols such as the M1911…Speaking of departments, the 645s greatest claim to fame of its period was that it was carried and used– extensively– by the fictional Detective Sergeant James ‘Sonny’ Crockett, as portrayed by Don Johnson in Miami Vice.” Previously, Sonny had carried a 10mm Bren Ten, which is now considered a treasured collector’s item.

Besides Hollywood cops, the M645 gained a lot of popularity with real-world law enforcement officers due to its ruggedness and reliability. The only downside, besides the bulkiness, was the relatively mediocre accuracy; as Massad F. Ayoob stated about 2nd Generation Smith auto pistols in his 1987 book The Semi-Automatic Pistol in Police Service and Self Defense, “None of the Smith & Wessons are famous for their accuracy.”

In 1988, Smith’s 3rd Generation pistols made way for the 3rd Generation. Accordingly, exeunt the S&W M645, and enter the S&W M4506. Among the changes: replacing the two-piece grips with one-piece wraparound Xenoy grip, switching from a fixed front sight to a dovetailed front sight with a white dot, a fixed Wayne Novak lo-mount carry rear sight, and a change from a hooked trigger guard to a rounded trigger guard.

Accuracy was improved as well; Mas Ayoob was much more complimentary about the 4506’s performance in that arena compared with its predecessor. The quality of the trigger pull, especially in DA mode, also improved significantly. Two things that remained constant were the stainless steel construction and the reliability. Regarding the latter, Chris Eger adds in an article separate from the one I previously quoted: “So reliable in fact, that most 4500-series pistols will even feed empty shell casings.” By contrast, most factory production model M1911s weren’t yet properly throated by their manufacturers to properly feed jacketed hollowpoint ammo, thus requiring the aftermarket service of a competent gunsmith.

Alas, to quote Mr. Eger one more time, “By 1999, the age of the 4500 had come and gone, forcing Smith to close the line. For another decade, they produced the alloy-framed 4513 and 4553TSW to tighter tolerances through the Performance Center but by 2009 even these guns were canceled. With so many new .40S&W chambered options, and increases in ballistics from 9mm rounds and smaller, these huge 8-shot .45’s were seen as a throwback to a long ago time when pastel suits with shoulder pads were cool.”

I had minimal shooting experience with both of these Smith .45s, dating way back to 1991. Both functioned reliably and fit my hand comfortably, and accuracy was adequate, but, much like my experience with firing SIGs, they didn’t blow me away, That said, I consider them to be some of the handsomest-looking pistols ever.

I can recommend either one of these models for the sake of collectability, pride of ownership, and casual range fun. As for self-defense usage, while they’re certainly still accurate and reliable enough to get the job done, the fact that both pistols have been out of production for so long means that it could be a bit tricky getting spare parts and service in case something breaks. Caveat Emptor.