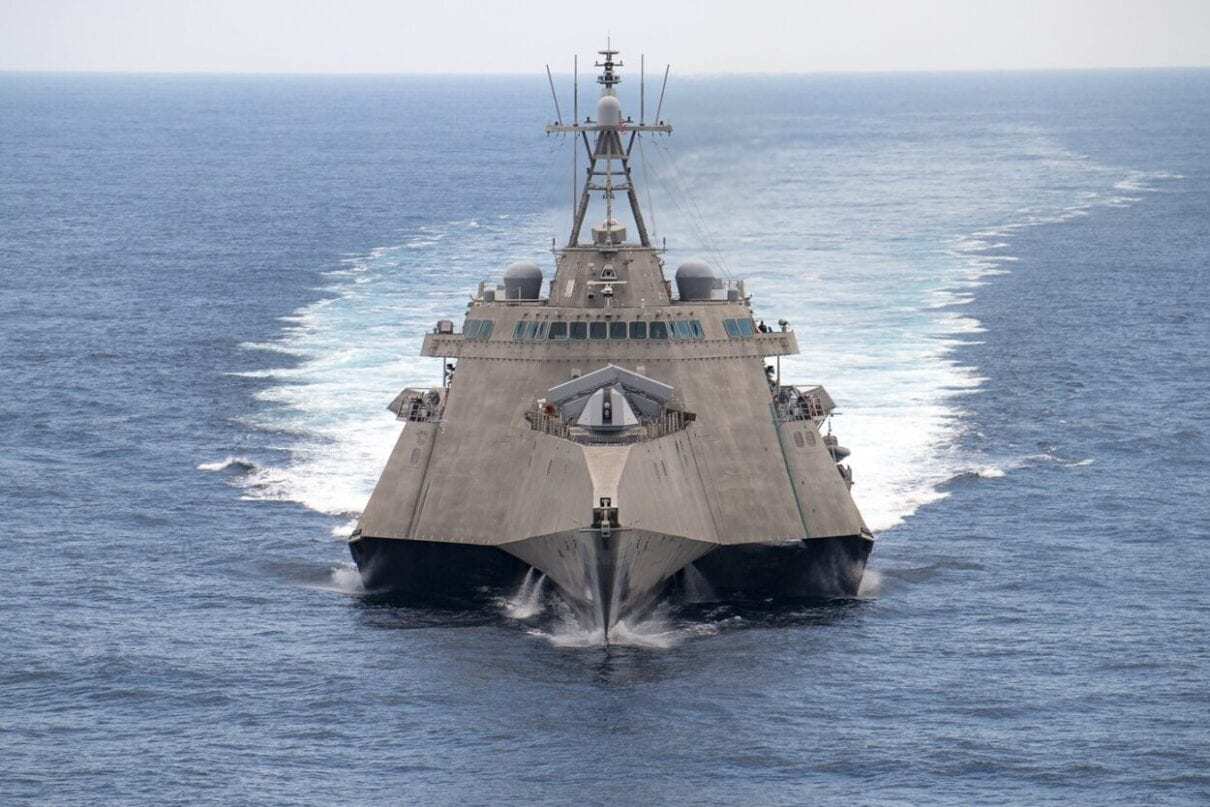 Editor’s Note from Harry J. Kazianis: What will Joe Biden do when it comes to U.S. naval strategy come January 20? For such a question, I can only turn to one of the most brilliant naval minds I have ever met, my former mentor and good friend James Holmes,  the J. C. Wylie Chair of Maritime Strategy at the U.S. Naval War College. Below Dr. Holmes gave us his impressions on the future of the U.S. Navy, Chinese military modernization, and the future of the South China Sea.

First, give us your overall sense of what priorities Joe Biden might move to the top of the list for the U.S. Navy? Increasing fleet size? Technological innovation?

People are policy, and strategy. Watch who goes where.

For example, it’s widely rumored that Michele Flournoy will be nominated for secretary of defense, or secretary of the navy would be a natural home for her as well given her history. When in the Navy Department before she championed the Mahanian concept that the sea is a common open to free use by all and subject to sovereignty by none (with a few narrow exceptions codified in the law of the sea). If that is an indicator of how she would conduct business at the Pentagon, I would expect to see us focus anew on the Mahanian “chain” of sea power, which connects production and shipbuilding at home, the use of the sea lanes to transport goods to foreign buyers and project military power, and access to foreign harbors to sell goods and repair and provide logistical support for merchant and naval shipping. Keeping that last link solid — commercial, diplomatic, and military access — is crucial.

With regard to the size and shape of the U.S. Navy, I suspect the 500-ship plan Defense Secretary Esper put forward shortly before leaving the Pentagon — “Battle Force 2045” — is off the table. The Obama administration did not put so heavy an emphasis on a particular fleet size as we have seen during the Trump years. But then China wasn’t as obvious a problem until toward the end of the Obama administration. So we could see something like the Trump 355-ship plan go forward, especially since it’s the law of the land. That’s a more attainable goal, especially if the navy and marines get their way and buy lots of small ships. But which 355 ships? To come back to Flournoy, in a Foreign Affairs article earlier this year she suggested pursuing leap-ahead technologies, things like unmanned craft, artificial intelligence, and so forth. If you made me place a bet between the two things you mentioned, I would bet on technological innovation over bulking up the fleet inventory. I would hope we do both.

I hasten to add that I do not expect some radical break from the past four years despite the change in style we are certain to see. Currents in maritime strategy tend to sweep people in the same direction no matter what political party they happen to represent. For instance, the pivot to Asia was an Obama initiative and it segued into the Trump National Security Strategy and National Defense Strategy, which proclaim that great-power strategic competition with China is upon us. Continuity is an overlooked factor in U.S. foreign policy and strategy across our history. Which I consider a good thing.

China clearly is a big challenge for the U.S. Navy–as are their DF-21D and DF-26B anti-ship weapons, something we have talked about for nearly a decade now. What is your sense of how the Navy perceives this and crafted a defense for these weapons? In your view, is that defense adequate? Or is the threat more hype than reality?

For obvious reasons, naval officers and officials are rather close-mouthed about technology and tactics. They don’t want to divulge too much out of the classified realm. I will say they seem to take the problem of anti-ship ballistic missiles seriously. That map depicting DF-21D and DF-26 ranges from the Chinese seacoast appears in every edition of the China Military Power annual report out of the Pentagon, just as it did during the Obama years. That demarcates the danger zone. But at the same time, no one seems to despair. Navy experts point out that you do not necessarily have to put a defensive missile on target to stop an incoming missile raid. That requires an impressive feat of ballistics when engaging a missile moving at hypersonic speeds. Striking at a moving ship or formation far out at sea involves a long “kill chain” connecting sensors to fire control to shooters. The sea is a big place. An aircraft carrier is a big ship but tiny by comparison to the sea. Finding it is not so easy. Plus, there are ways to warp or break the kill chain, including things as simple as reducing our electromagnetic signature out at sea. We used to practice “emissions control” all the time during the Cold War, regulating what we transmitted for radar or communications purposes. EMCON is making a comeback in the fleet in a big way. So again, my sense is that navy leaders see the problem as serious but not insurmountable. The Soviet armed forces had their Backfire bombers coming out to smite us at sea; the People’s Liberation Army has anti-access and area-denial weaponry of its own.

Finally, the South China Sea has been a hot topic as Beijing has tried to slowly but surely dominate this body of water. Both Obama and Trump have tried different strategies to mitigate or stop Beijing from de facto controlling the vital sea lanes there. What can a Biden Administration do differently? Or, does China’s geographic proximity, economic muscle and military prowess mean the South China Sea will be Lake Beijing sooner rather than later?

I suspect we will see renewed attention to alliance diplomacy. There is some merit to the Trump administration’s demanding that allies “pay their fair share” and the like, but constantly telegraphing that the U.S. military might pack up and go home if they don’t pay their fair share is interpreted, reasonably enough, that we no longer consider solemn alliance commitments sacrosanct. Southeast Asian states are uncomfortably aware that the United States may come and go from maritime Asia but that they have to live with China forever. We do not, or should not, want them to think we might cut and run from our commitments. Otherwise, they may conclude that accommodating China is their only option, even if that means forfeiting sovereign rights and degrading the liberal order at sea. There are limits to dealmaking as a principle of diplomacy and military affairs.

If we do keep faith with Asian allies and partners, they will be likelier to work with us and grant us access to their soil. Without that access our strategic position in the South China Sea is intermittent at best; with support from allies and partners, we could remain on the scene more regularly in order to put everyone on notice that the world rejects China’s maritime claims. Woody Allen said probably one thing of strategic relevance in his career, and that’s that eighty percent of life is showing up. I would add that the other twenty percent of life is staying after you show up. We can do the showing-up part, as we have during the Obama and Trump years, but it’s hard to stay without base access and logistical support near scenes of action. That’s the nature of naval operations in the machine age.