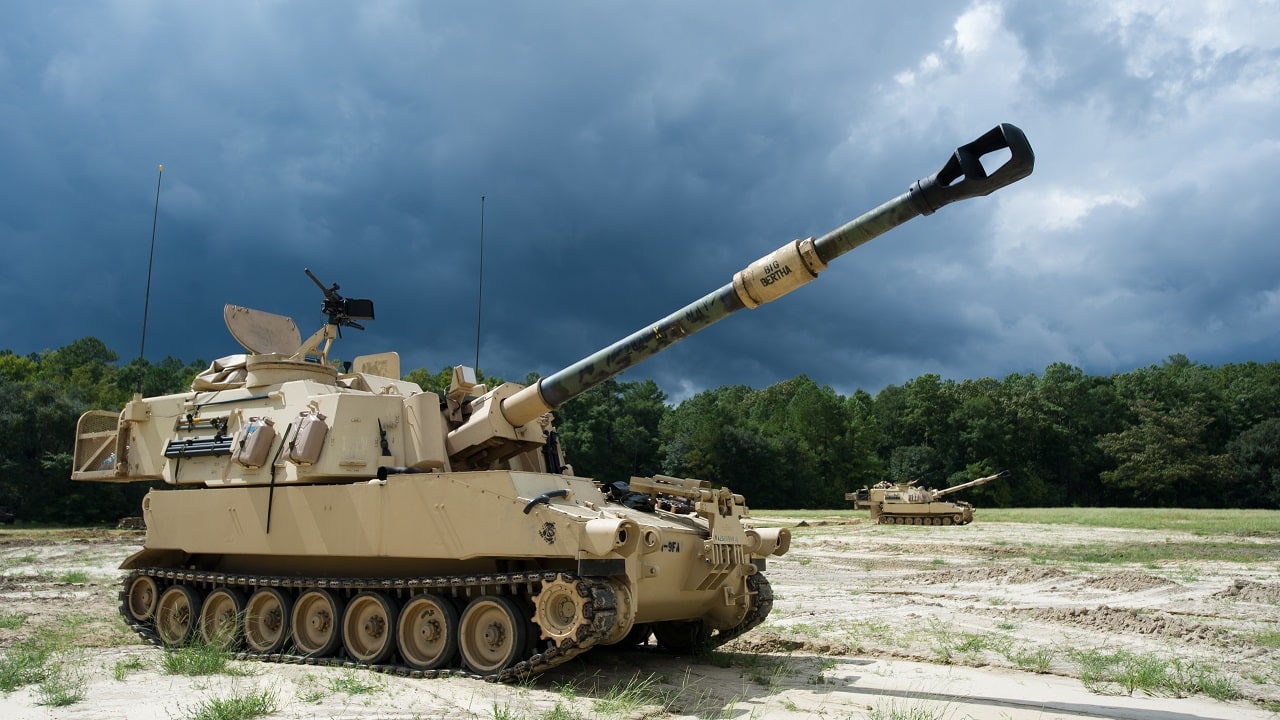 M109A6 Paladins from Battery B, 1st Battalion, 9th Field Artillery Regiment “Battlekings”, 2nd Armored Brigade Combat Team, 3rd Infantry Division, sit ready to fire their Gunnery Table VI here, Sept. 11. The Battlekings’ B Battery just completed Paladin GT VI crew qualifications. Unique to this gunnery is the fact that it this will be the last rounds fired by the Battlekings for the foreseeable future as they are slated to inactivate in the very near future. (U.S. Army Photo by Staff Sgt. Richard Wrigley 2nd ABCT, 3rd ID, Public Affairs NCO)

The M109A7 Paladin is one of the US Army’s most powerful weapons of war. Here is a full readout of what it can do in battle: Some civilians call it a tank because it is a mechanized tracked vehicle. But do not make that mistake, because it’s really a mobile field artillery cannon with a long tube. The Army calls it a self-propelled howitzer and it fires a huge 100-pound 155mm shell. It was not used much during the war on terror, but in a potential conventional war with revisionist powers like Russia and China, the M109A7 Paladin will be one of the most important weapon systems on the battlefield.

The Paladin came into U.S. service in 1994. Israel and South Korea use them, as well as Kuwait and Taiwan. There are four crew members – a commander, driver, loader, and gunner. The Paladin can move on its own on two tracks. The idea is to “shoot and scoot” – fire some rounds and then move to a new position – to keep the enemy guessing.

The Paladin is Artillery Writ Large

Firing a shell with its huge 155mm M284 cannon makes a deafening noise. The Paladin can engage a target at least 14 miles away and upwards of 19 miles with certain assisted rounds. The rate of fire is impressive – as fast as eight rounds a minute maximum. Once a Paladin moves to a new position, it can fire again within 60 seconds.

The Paladin crew has to be smart. Powerful computers are inside the gun and the system is GPS dependent. In fact, the first thing the commander does is sync the system’s clock to GPS. This step is potentially problematic because the Russians excel in ground-based electronic warfare and it is within the realm of possibility that the Paladin could have its system jammed in a fight with Russia. The Russians are already displaying prowess in Ukraine at electronic warfare that can make artillery go off course.

Can a New Artillery Shell Called the Excalibur Really Travel That Far?

The Paladin has a new artillery round called the Excalibur that is a guided shell and part of the Army’s Long-Range Precision Fires program. This makes the M109A7 much more lethal. Raytheon calls it a “revolutionary precision munition.” Excalibur can land near a target as close as two meters. The range is longer, at more than 31 miles.

Robots Are Coming to Help the Paladin

Before I branched Infantry, I was on the Paladin when I simultaneously served in Field Artillery as an Army ROTC officer cadet. We had to load the 100-pound howitzer shells by hand and this task got old very quickly. If you drop one on your foot, even wearing steel-toed boots, you are having a bad day. Now the Army, led by its new Applications Laboratory, is allowing six companies to compete for the development of a robot ammo handler that will automatically load the Paladin with shells.

The Army, since it is worried about a conventional armored fight against Russia or China, is also trying to improve the Paladin’s gun. It aims to enable the howitzer to fire at targets an astonishing 62 miles away. Lengthening the range of its new and existing land-attack weapons programs, like the Paladin, is part of a new Army strategy called “Multi-Domain Battle.” The new fight is predicated on stand-off arms systems such as the Paladin, and various new land-based rockets and missiles. Under the concept, the Army would focus on jamming enemy drones, using artillery fires, launching surface-to-air missiles, and then attacking with stand-off arms. This would potentially protect more soldiers while refraining from up-close battle that could result in more casualties.

The Paladin is making a comeback. Armored battles were not as prevalent during counter-insurgency fighting during the war on terror. Counter-terrorism, drones, and special operations forces, plus air superiority, was the name of the game over the last 20 years. But now tanks and howitzers, hearkening back to the Cold War-era, will be the focus.