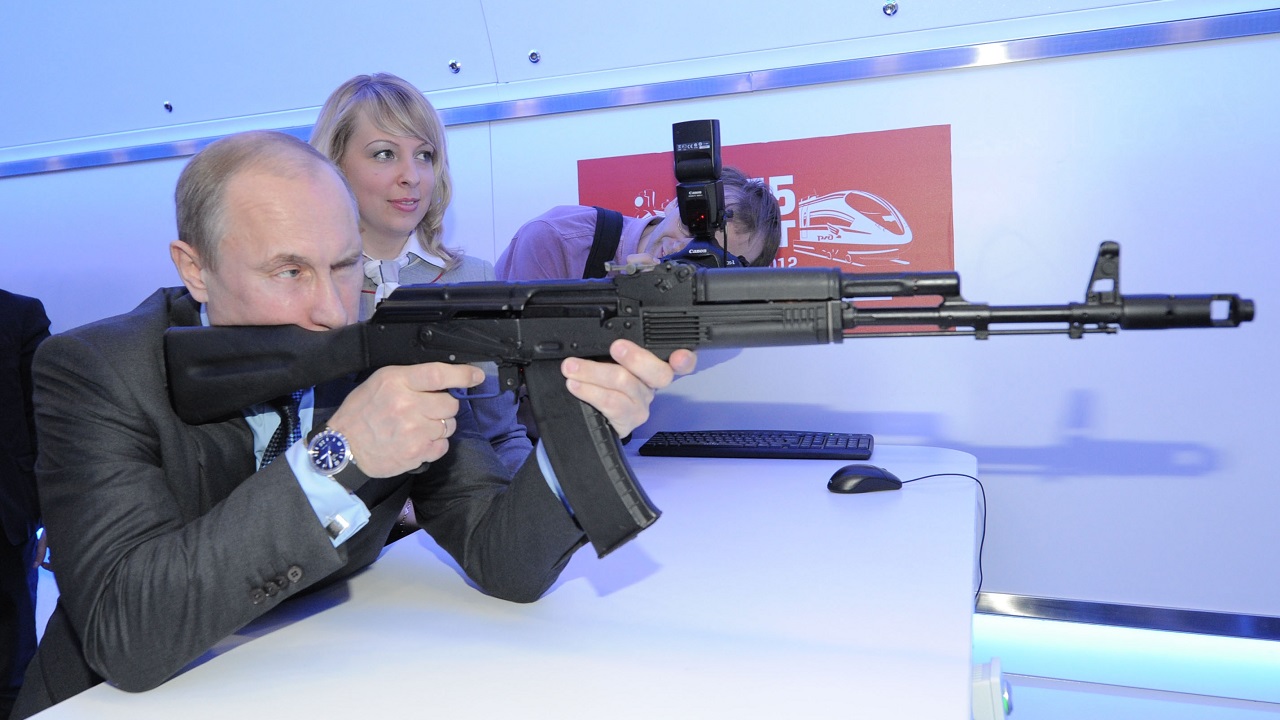 Then President-elect Vladimir Putin aiming with an AK-74 rifle simulator at an electronic shooting gallery during his visit to the Russian Railways Scientific and Technical Development Center in Moscow's Rizhsky railway station.

What if the current Ukrainian offensive leads to victory? What if Russia eventually accepts that the war is stalemated or lost and removes Vladimir Putin from power? That could bring a rare opportunity to correct Europe’s distorted boundary lines and usher in a decadeslong peace between Russia and the West.

For that to happen, the West must continue to pressure Russia with sanctions and resist the temptation to be too accommodating. Moscow understands that, ultimately, it has two options: resurrecting its ties with Europe or falling into China’s arms. The latter would be a strategic, military, cultural, and religious nightmare. The former should require significant concessions.

Here are the crucial issues:

– Ukrainian reconstruction: The Russian government, businesses, and oligarchs should pay an indemnity of hundreds of billions of dollars to restore the physical damage from the invasion.

– Military restrictions: Russia should be enjoined by treaty from maintaining any military or military-related naval vessels, drones, or military aircraft in the Baltic Sea, the Black Sea or the Sea of Azov for 50 years. Russia should also withdraw all its military and paramilitary units and weapons within at least 60 miles from its Western borders, from Finland in the north to Georgia in the south, including the Belarus border. This initiative would be analogous to the disarmed German Rhineland after World War I.

Once Russia has completed these land withdrawals and they have been in place for a few years, the North Atlantic Treaty Organization should commence a similar withdrawal of its forces away from the Russian border.

– War crimes: Russia must face penalties for its wartime atrocities. It should be required to hand over to Ukrainian courts any Russian soldier or civilian named in a war-crimes indictment and the commanding officer of any Russian military unit identified with a war crime. That goes for mercenaries, too. They have limited rights under international law and can be prosecuted for their battlefield actions. Turning mercenaries over to Ukraine for trial and punishment may deter mercenary service in future conflicts.

– Nuclear weapons: By treaty with NATO, Russia should agree to reduce its nuclear weapons immediately to a number and quality no more significant than those possessed by the U.S. and agree to inspections by NATO to guarantee compliance. Moscow, by treaty, should formally withdraw its threats to employ tactical nuclear weapons in Europe and pledge no first use of nuclear weapons as its new and permanent policy.

– Hacking: Russia should pledge to end hacking against any NATO country and abolish all public and private anti-Western hacking groups.

– Re-education: To ensure the Russian population understands the gravity of its leaders’ crimes and the reasons for the penalties associated with restitution, the Russian government should require newspapers, magazines, government and media blogs, television and radio stations, for two years, to publicize, without excuses, the gravity of Russian aggression and war crimes over the past 75 years. Russian textbooks and related reading should include accurate accounts of Russian aggression and war crimes in recent decades. These measures are similar to the acknowledgment that Germany had to make to expiate guilt for its aggression in World War II.

– China: While maintaining equitable diplomatic and trade relations with China, Russia must withdraw from the 2001 Sino-Russian Treaty of Friendship, which established close military, diplomatic, and economic relations between the two countries.

– Land: For decades, Moscow has stolen territory from its neighbors. Russia took parts of the region of Karelia and Salla and all of Petsamo from Finland in 1940, the South Kuril Islands (Northern Territories) from Japan in 1945, Transnistria from Moldova in 1992, Abkhazia and South Ossetia from Georgia in 2008, and Crimea and parts of eastern Ukraine in 2014. All these territories should revert to their rightful owners. Kaliningrad, seized from Germany in 1945, belongs geographically with Poland. And Russia should withdraw its military, police, civilian and diplomatic forces from Belarus and pledge not to interfere in that nation’s elections or politics.

What’s in it for Russia to make some or all of these concessions?

Once an agreement is reached with NATO nations, each would agree to a peace treaty and ease sanctions cautiously over ten or more years. Such easing might include a gradual increase in airline service between Russia and the West, a measured increase of Russian diplomats allowed in the West, an increase in Russian legal emigration to the West, expansion in the trade of nonstrategic goods, diminishment of financial restrictions, and the resumption of aircraft parts and service agreements with Western aircraft makers.

While implementing these punitive and restorative measures, NATO and nonmember Western countries should discuss long-term steps by which Russia could gradually integrate itself with Western economic, political, cultural and religious institutions. The European Union, which played a beneficial role in integrating the formerly communist societies of Eastern and Central Europe, could lead this endeavor.

The goal of these integrative measures would be an emergent democratic and free-market Russia proud of its newfound status as a leading member of the reconfigured West.

James Fay is a semi-retired California attorney, political scientist, and college administrator. He served as an intelligence officer in the U.S. Army, 3rd Armored Division. He has published articles on the Helsinki Accords, NATO funding, and Higher Education reform. His articles have appeared in the Wall Street Journal, the Los Angeles Times, the Nation, 19FortyFive, Real Clear World, the American Spectator, and the Washington Times.