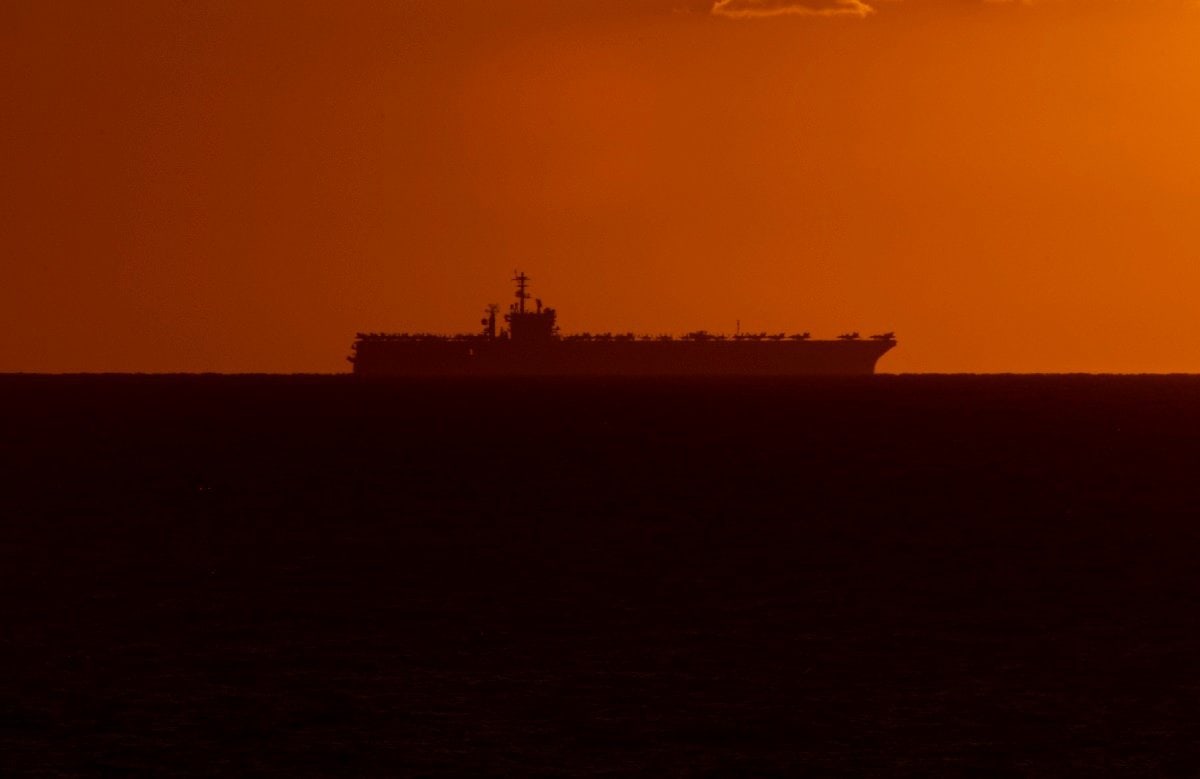 The aircraft carrier USS Nimitz (CVN 68) steams in the Indian Ocean, Jan. 6, 2020. The Nimitz Carrier Strike Group is deployed to the U.S. 5th Fleet area of operations to ensure maritime stability and security in the Central Region, connecting the Mediterranean and Pacific through the western Indian Ocean and three critical chokepoints to the free flow of global commerce. (U.S. Navy photo by Mass Communication Specialist Seaman Drace Wilson).

The U.S. Navy needs more firepower on the cheap. That’s the message retired U.S. Marine colonel T. X. Hammes broadcasts loudly and clearly in the current issue of the U.S. Naval Institute Proceedings. T. X.—we spent a week some years back prowling the not-so-mean streets of Tokyo and Yokosuka with Japanese comrades, hence my familiarity—implores the navy to acquire “missile merchants.” By that he means preowned cargo ships that can be bought at a low, low price, outfitted with missiles that can be fired from multimodal shipping containers, and operated by crews that are trifling in numbers compared to those assigned to traditional combatant ships.

Hammes estimates the navy could procure forty missile-armed merchantmen for one-quarter the cost of a single über-pricey Ford-class nuclear-powered aircraft carrier and its complement of warplanes, or around $5 billion. Each used hull would come in at around $40 million. Refitting the hull, installing maintenance, command, and living arrangements, and heaping up the decks with containerized armaments would bring the total price tag for each merchantman-cum-warship to $125 million. Forty copies run $5 billion.

A bargain at twice the price!

T.X. compiles a compelling brief for missile merchants’ operational value. Naval power is in flux. Years ago naval leaders took to insisting that fleet design should put the accent on “payloads, not platforms.” Rather than procure ships and planes boasting “luxury-car” capability, in other words, the U.S. Navy should acquire “trucks” for hauling ordnance to scenes of battle. No-frills pickups have humble price tags compared to supercars.

Cheapness is a strategic and operational asset in these straitened times, almost as much as sensors and armament are. Bargain-basement prices allow fleet builders to field platforms in bulk, taking advantage of the truism that quantity has a quality all its own. A force thus equipped can disperse firepower among many firing platforms, spreading them out on the nautical chart to stymie an enemy counterattack while concentrating force at scenes of action. This is the logic underlying the concepts of “distributed lethality” and “Distributed Maritime Operations,” all the rage in American naval circles for some time now.

Heck, heretical practitioners and theorists have taken to asking whether the ship as traditionally understood remains the proper unit of combat power at sea in our high-tech age. Martial sages from Carl von Clausewitz to Alfred Thayer Mahan note that the paramount goal of battlefield strategy is to make oneself stronger than the foe where it matters, when it matters. In crude terms: if the foe can stage X units of combat power at the time and place of battle, then strategy is the art and since of staging X + 1 units (or more, depending on the commander’s tolerance for risk) at that time and place. 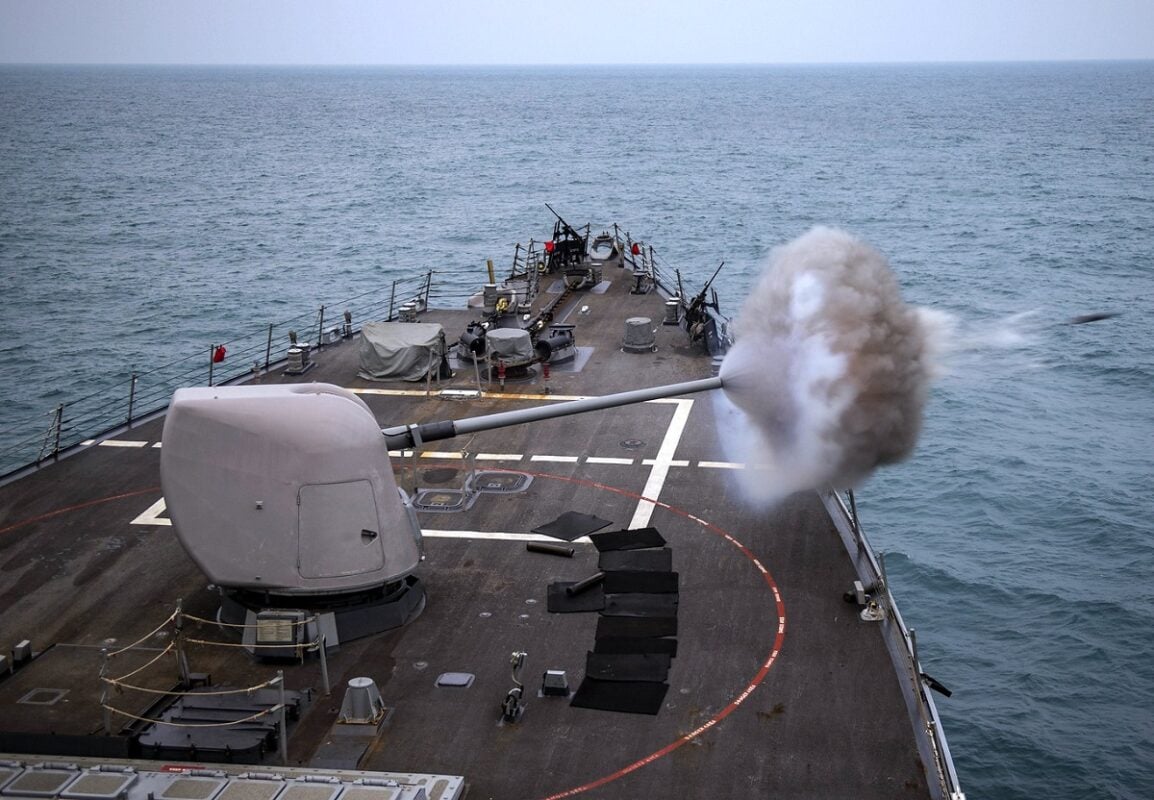 ARABIAN GULF (Dec. 18, 2020) The guided-missile destroyer USS John Paul Jones (DDG 53) fires its Mark 45 5-inch gun during a live-fire exercise in the Arabian Gulf, Dec. 18, 2020. John Paul Jones is part of the Nimitz Carrier Strike Group and is deployed to the U.S. 5th Fleet area of operations in support of naval operations to ensure maritime stability and security in the Central Region, connecting the Mediterranean and the Pacific through the western Indian Ocean and three strategic choke points critical to the free flow of global commerce. (U.S. Navy photo by Mass Communication Specialist 3rd Class Aja Bleu Jackson) 201218-N-XG173-1132

It matters not whether a unit of combat power arrives on scene from a U.S. Navy warship, an Air Force bomber or attack jet, or a Marine or Army unit lofting ground-based missiles toward the scene. Or a superempowered cargo ship. Strength is strength—whatever its source. The strongest force wins, not the strongest ship or fleet.

For the time being, though, let’s be traditionalists and stick with the fleet. A more numerous force in which all ships are missile-armed fighting ships can deliver more combat punch. At the same time a dispersed force can withstand a punch and fight on. It is resilient. It can afford to lose ships to enemy action. After all, subtracting a vessel from a distributed fleet subtracts only a small percentage from the fleet’s aggregate strength, whereas losing a carrier, cruiser, or destroyer from today’s luxury-car fleet deducts a hefty percentage from the force’s fighting power.

High-seas advantage comes from spreading out and fighting back from within reach of an antagonist’s anti-access/area-denial armory. U.S. and friendly forces will stand in, defying hostile efforts to drive them away from likely battlegrounds, rather than stand off in hopes of eluding enemy fire.

Like all Naval Institute scribes, Colonel Hammes had to conform to a tight word count to see his work into print. Much about the missile-merchants concept goes unsaid as a consequence. So let’s expand on the idea here, probing its operational, strategic, and political merits. How could a freighter with minimal if any shipboard self-defenses stand-in within range of Communist China’s vaunted array of missiles and combat aircraft?

Through concealment and guile. Disaggregating battle strength for reasons of effectiveness and cost is not a novel idea. The late, great tactician Captain Wayne Hughes espoused a low-cost flotilla of small combatants for many years. His flotilla would have been resilient by being numerous and fleet of foot. Hammes’s merchant flotilla would be resilient through vessels’ unobtrusive outward appearance.

After all, one used freighter stacked up with cargo containers looks much like another. Countless container ships frequent East Asian waters, the arena for any likely air-sea fight. A missile-merchant crew that kept a low profile, managing its electromagnetic signature to avoid giving away its identity, could blend right in with commercial traffic. People’s Liberation Army (PLA) electronic-warfare snoops could monitor shipping and know U.S. missile freighters were within reach yet not know which ships they were.

Welcome, PLA, to the horns of a dilemma. Rocketeers could hold their fire and let U.S. ships stand in. Or they could let fly and risk hammering merchantmen plying peaceful commerce—and bringing international wrath down on the Chinese Communist Party. Better still, U.S. crews should school themselves in deceptive practices. In case a U.S. missile merchant were hit, why not feign being a mercantile ship struck while innocently plying its trade in congested sea lanes?

Such tactics are worth pondering when drawing up doctrine for handling missile merchants in times of peace and war. Doctrine writers and executors should consult the classic works of master trickster Barton Whaley in the course of their work. They could glean some tips about how to hide things—even something as bulky as a container ship—in plain sight. Figuring out when and how a missile freighter should fire its missiles, and whether and how it can resume its place in the crowd of shipping afterward, commands prime importance.

There’s also diplomatic value to the missile-merchant concept. At $125 million a copy, assuming Hammes’ figures pan out, this is a capability within budgetary reach for countries up and down the East Asian seaboard, not just wealthy competitors like Japan or South Korea. Taiwan could add a flotilla of missile freighters to its increasingly asymmetric navy, stationing them in harbors around the island’s periphery to mingle with merchant ships. Let the PLA try to distinguish one container ship from another—and enjoy the propaganda fallout from a misstep.

Even the Philippines or Vietnam, which lack the defense budgets to compete toe-to-toe with China’s coast guard, maritime militia, and navy, could afford such a low-cost capability. Such vessels would bolster the ability of Manila, Hanoi, and other claimants to defend their nautical sovereignty out of their own resources. Southeast Asians would take heart. They too could keep Beijing wondering and worrying. China’s neighbors might gain the confidence to take league against a domineering China—to the profit of maritime freedom for all seagoing societies.

These are just some opening musings about an intriguing and promising concept. Hammes prescribes an experimental ethos to help the project take shape. He suggests buying a merchantman or two, preferably a large and a small one, modifying them in keeping with his idea, and playing around with them to see what does and doesn’t work with these unconventional ships of war. Gamesmanship would help the sea services learn how many missile freighters they need, what mix of hull sizes and missile magazines yields the optimal operational bang, and on and on.

In the immortal words of Rear Admiral Wayne Meyer, father of the Aegis combat system: build a little, test a little, learn a lot.