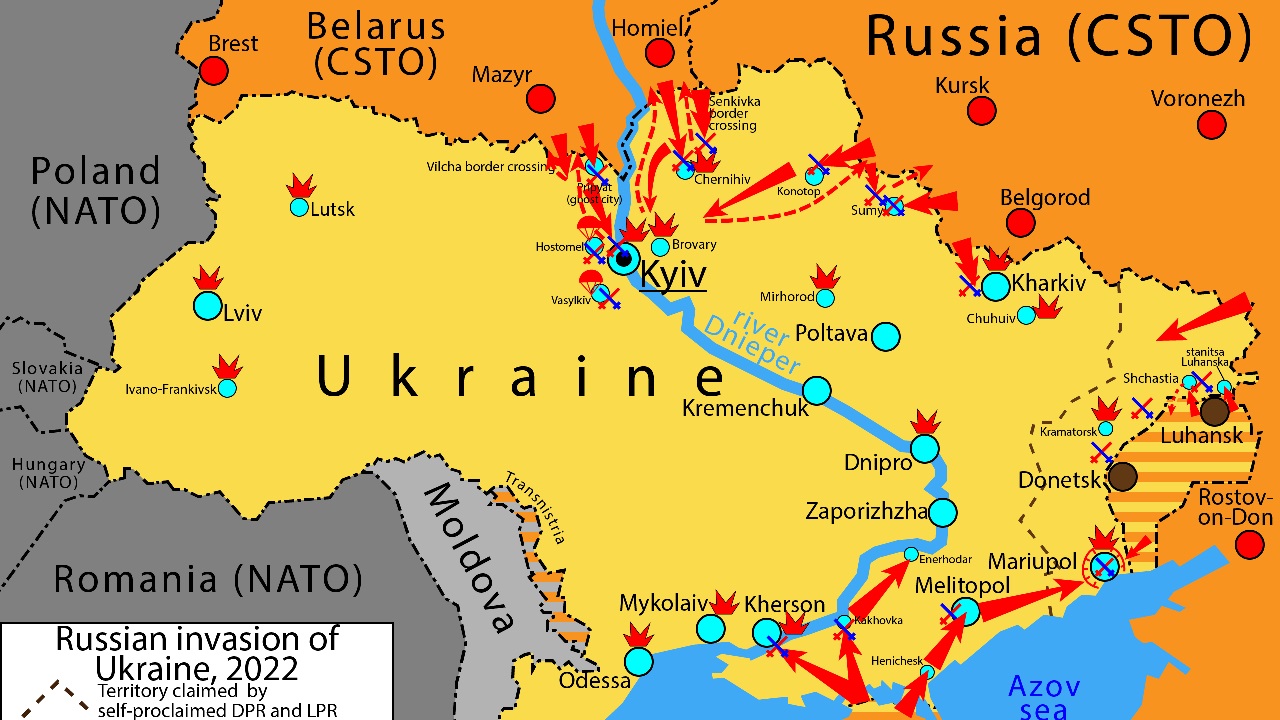 Ukraine has had remarkable battlefield successes repelling the Russian invasion, but there is no denying Putin’s onslaught has caused massive destruction of lives, cities and farming fields.

On the ground, Russian troops looted countless civilian homes, and rendered huge swathes of farmland unusable with mines and shelling. Moscow furthermore is shipping stolen grain abroad, and blockaded Ukraine’s own shipments until July when Turkey brokered a deal to avert global famine.

Other war-related factors contributing to a projected 35% contraction of Ukraine’s economy are refugee outflows causing the population to shrink by 7.7 million (nearly 18%), currency devaluation, a 40% inflation rate, and Russia’s capture of the port cities of Mariupol and Kherson. Altogether, these make it hard for Ukrainians to earn their living and for Kyiv to collect adequate tax revenues to sustain basic services while also paying for a war for national survival.

Fortunately, Ukraine is receiving substantial economic and humanitarian aid, not just weapons. That includes $13 billion from Washington by the end of 2022, with $1.5 billion per month planned for 2023. European institutions, though moving slower, claim they will disburse $9 billion by the end of 2022. However, that falls short of the $38 billion annually Kyiv says it needs to rebuild.

Even if victorious on the battlefield, how can Kyiv recover from such wanton destruction? What costs must be paid to not only defeat Putin’s invasion but to rebuild what it destroyed?

To answer those questions, in October, I spoke over Zoom with Tymofiy Mylovanov, president of the Kyiv School of Economics since 2016, former minister of Economic Development, Trade, and Agriculture, and a professor at the University of Pittsburgh in various capacities since 2010. Mylovanov flew back into Kyiv hours before Russian forces massed in Belarus began rolling towards the Ukrainian capital. Since then, he’s focused his efforts on obtaining international assistance for Ukraine.

Note: This interview has been edited for clarity and concision. Additional context is provided in brackets in some places.

Sébastien Roblin: Ukraine will require a massive reconstruction effort. How much will it cost?

Tymofiy Mylovanov: I was just at a restaurant in Kyiv. They were raising money for the military and it was packed. So such businesses are thriving, which is in many ways surreal. They’ve adjusted to the war! But of course, between 20% and maybe up to 40% of GDP has been destroyed. Plus much of the agricultural land is now mined.

We should think of Ukraine’s economy as being like the United Kingdom’s in World War II. It will require support from the rest of the world for the duration of the war, and even after the war.

Currently, military spending is about half of the budget in 2022, and half next year too. We wouldn’t be able to sustain that even if we retained our undamaged, pre-war economy. We will need economic support equivalent to $30 to $50 billion a year.

TM: We actually have suffered $100 billion in economic  losses, and of that, I would make an educated guess that one-third is the strategic damage to infrastructure. They are trying to deny the future of the economy, so they are attacking energy, logistical hubs, railroad hubs, some manufacturing facilities, and metallurgy.

SR: What kind of assistance does Ukraine need most?

TM: What we need is foreign currency. We’re spending most of our reserves on the military. We can print as much local currency [the hryvnia] as we want, but really, we have to import it so it’s not a liquidity issue. That way, we can avoid hyperinflation [when high inflation causes money to lose value catastrophically fast] and economic crisis.

SR: How is this affecting the labor market in Ukraine?

TM: On the microeconomic scale, there’s amazing agility, a lot of innovation. Educational companies are having all-time profits as people re-skill, moving away to IT jobs and expert services they can provide via the internet thanks to internet-based conferencing [like Zoom, Teams, Webex etc.].

TM: Yes! They are doing education, and cybersecurity, and they get paid by Western companies. Some of them are donating. Some of them—it’s providing consulting services for companies outside Ukraine.

SR: Structurally, how is Ukraine’s post-war economy likely to change as a result of the war in terms of labor allocation, international business partnerships and so forth?

TM: Most of our experts were in the metallurgy sector—and while we still have plants, they’ve been mostly destroyed like the famous Azovstal factory in Mariupol [site of a last stand by Ukrainian forces in May.] So probably will have to go to raw ore.

Agriculture is going to rebound, but there is the problem that 20-30% of land is contaminated by mines. We don’t want to have farmers and children lose their lives to mines. It’s very expensive to clear them—at $50,000-75,000 per hectare, it’s not worth it. So people are looking for innovative methods. Perhaps we can come up with robotic agriculture equipment. All of the non-military applications of military innovations [like unmanned mine-clearing vehicles] will have a use. And all those veterans with experience using them will return to the civilian job market.

SR: Ukraine is currently seeking to accede to the European Union. How is that going?

TM: There’s a very formal process ongoing. You have to meet some standards. In my view Ukraine is as compliant with EU standards as Hungary is, or more. But accession is a political process that we hope will not take too long.

SR: And how would accession affect Ukraine’s economy?

TM: We’re standing up for European values but we feel we haven’t been as supported as we could have been by Europe. So we would be perceived to be Europeans. And on technical grounds, you have all these bureaucratic experts, in the best sense of that word.

Since 2010, the EU has done a fantastic job improving the laws of Greece. We could have benefited from something like that. We need anti-trust authorities that can take on the oligarchs. We still have all of this [outdated] legal infrastructure inherited from Soviet Union. For example, many things considered collusion in U.S./Europe are not considered that way in Ukraine. It’s a very difficult charge to prove. 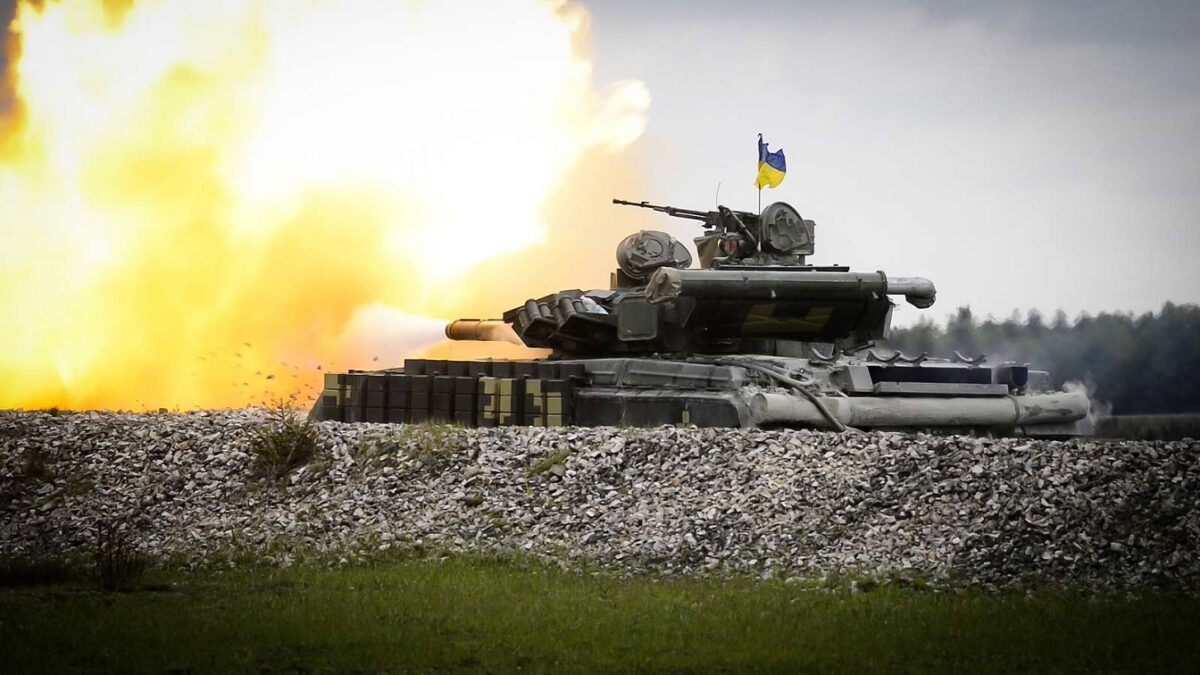 We have done a fantastic reform to the central bank—and guess what? It hasn’t stopped work for a day during the war. But our anti-trust authorities remain unreformed, even though we have some good people appointed there.

SR: Any insight into the future of Ukraine’s defense industry, given tough choices between adopting foreign hardware and building locally?

[Context: Ukraine retained a sizable military industrial sector upon separating from the Soviet Union, and in the 2000s, exported many Soviet-built weapons abroad, ranging from tanks and jets to even an incomplete aircraft carrier. But despite some successful new weapons like the Stugna anti-tank and Neptune anti-ship missiles, and BTR-4 fighting vehicle, it has struggled to deliver many defense goods in volume and on time, and can’t produce Soviet-type shells fast enough. Kyiv therefore is becoming increasingly dependent on Western arms and ammunition.]

TM: Arms exports are done for now. It made billions before, now we’re not exporting anything. We’ve essentially run out of Soviet-type weapons, and we’re relying more or less on NATO. So we need to learn how to service [NATO arms]. There’s certainly issues of technology and protocol of servicing. Many of these use parts built in multiple countries, which won’t be workable long term. So I think there’s an opportunity and demand domestic industry can fulfill and we’ll see over time more robust solutions prevail.

And though we have run out of Soviet-type equipment, we have got a lot of equipment donated by Russian troops. They supply more than NATO countries (though NATO’s are more powerful and precise.) So we’ll need to service Russian “trophy” equipment too.

SR: What of the much-anticipated cyberwar?

TM: There was a lot of expectation that the banking, telecom sector would be shut down. There are a number of factors explaining why that didn’t happen on a large scale, especially that Ukraine had seen it before [since 2014] and was ready. There have been some embarrassing cyberattacks, but they’re mostly symbolic. We don’t know what the more substantive or meaningful were.

I think Russia has lost a lot of IT talent. I talked to some Russian IT guys, and they say even before the mobilization began everyone who can move and can code has left, often with the rest of their office, for Dubai, Kazakhstan, Austria, maybe even the U.S. We have few entrepreneurs in Ukraine, half of them are in the senior leadership. But in Russia, there are zero left.

SR: Russia has so far weathered economic sanctions better than most expected. Do you think that will eventually change, and if so—when and why?

TM: I have argued since the beginning that it’s going to take time. Russia has difficulties with the international supply chains, things are not as rosy as Putin expected. They are also manipulating data in many ways—unemployment is higher than official numbers. They’re limited in their ability to circumvent the sanctions, though they are still constantly trying to.

It’s also not so easy to switch oil exports to India and China. It takes time to build pipelines. They have different types of oil. Often you have to move things by tankers, and those need to be insured (mostly by Western companies!)

According to our research, these developments will accumulate by Spring in 2023. So Ukraine’s ability to get through this winter will be decisive.

That said, the West could have created panic and caused economic collapse if assets had been seized from the beginning, and a gas and oil embargo imposed immediately. But the world has been afraid to impose stricter sanctions. Instead, it’s been a wait-and-see approach, step-by-step, and I think that’s not the right way.

It’s like Western deliveries of weapons. It’s a policy choice not to be harsh enough. Imagine if Ukraine had been given HIMARS or air defense missiles before the invasion—it could have avoided the massacre at Bucha and Izium!

Sébastien Roblin writes on the technical, historical and political aspects of international security and conflict for publications including the The National Interest, NBC News, Forbes.com, War is Boring and 19FortyFive.  He holds a Master’s degree from Georgetown University and served with the Peace Corps in China. You can follow his articles on Twitter.